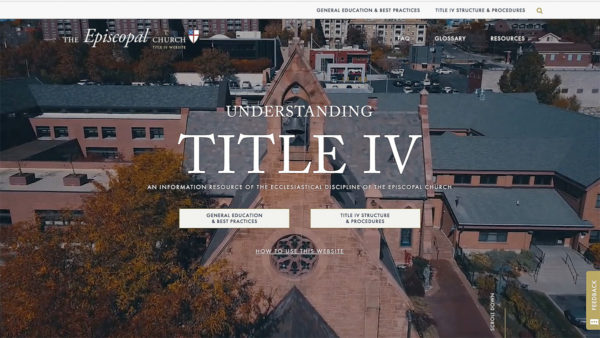 A nearly two-year effort to develop an interactive website to help Episcopalians navigate the church’s Title IV clergy disciplinary process came in under budget and will debut this July during the 79th meeting of General Convention.

[Episcopal News Service – Austin, Texas] The Episcopal Church’s decades-long process of refining its clergy discipline process will take a big logistical step forward this summer when an interactive website debuts. The site was developed with the hope of bringing a common understanding of the rules and helping clergy avoid getting into trouble and injuring others in the first place.

The website is in the beta testing phase, and members of the church’s Executive Council have been invited to join that process. It is scheduled to debut during General Convention in July. The site is designed to help Episcopalians navigate the church’s Title IV clergy disciplinary process (those canons can be found beginning on page 131 of the church’s Constitution and Canons here).

Council member Polly Getz, who has long-time experience as a chancellor at various levels of the church, explained to her colleagues April 21 that the website is the result of nearly two years of work by a subcommittee of the Standing Committee on Structure, Governance, Constitution and Canons.

The project drew praise from three of the church’s leaders after it was presented to the council.

Presiding Bishop Michael Curry noted during a news conference after the end of the meeting April 23 that the invitation to the council to give feedback on the website occurred during the same meeting in which he briefed the members on the report of the Commission on Impairment and Leadership.

Both the website and the report and its recommendations address what happens when “people are hurt or wounded,” he said. Each represents “this church’s commitment to be a place where every human child of God is safe, is respected as a child of God made in God’s image and where we can be as sure of that as we can. That’s this church saying to #MeToo: we’re taking that seriously. It is worth putting all this time and energy into this because we’re serious about this.”

House of Deputies President the Rev. Gay Clark Jennings said, “This has become a project of the heart, mind and soul” for Getz and Diocese of Utah Communications Director Craig Wirth, with whom Getz worked.

The website project will “deepen our ability to respond to unfortunate situations in ways that are constructive, positive and help all parties move ahead,” Jennings said.

The Episcopal Church has been a leader in addressing and trying to prevent clergy misconduct, according to the Rev. Michael Barlowe, the executive officer of General Convention. The current effort is “a continuing unfolding of the Episcopal Church’s historic emphasis on making our church the safe church that we want to be.”

“This is yet another example of how the Episcopal Church is trying to walk its talk,” Barlowe said. 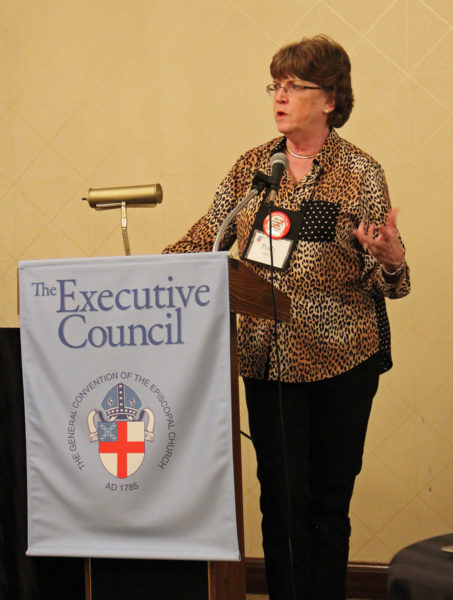 Executive Council member Polly Getz of San Diego briefed her colleagues on the construction of an interactive website to help Episcopalians learn how to live into the spirit of the church’s clergy discipline rules, known as Title IV. Photo: Mary Frances Schjonberg/Episcopal News Service

Getz told Episcopal News Service after the council concluded its meeting here that, despite the best efforts of those who have had a hand in rewriting the clergy discipline rules and trying to streamline them, those rules have gotten more complicated. “The more important reason for wanting to do the website is that we had folks across the church doing [Title IV] training and they were not necessarily interpreting what they were reading in the same way,” Getz said. Those differences have led to inconsistencies in how the canons were being interpreted and “lived into,” she added.

Plus, Getz said, the website pays more attention to Title IV’s theological underpinnings than previous training efforts, including the importance of grounding clergy discipline in the principles stated in the preamble to the rules. “By virtue of Baptism, all members of the church are called to holiness of life and accountability to one another,” that canon says. “The church and each diocese shall support their members in their life in Christ and seek to resolve conflicts by promoting healing, repentance, forgiveness, restitution, justice, amendment of life and reconciliation among all involved or affected.”

Getz said chancellors always discuss how Title IV is being used across the church. “The conclusion has been, for the last 15 years, that no matter how much we study and talk about it, we still end up with folks interpreting it differently in one place versus another,” she said. Her hope for and the objective of the project are to rectify those situations and help the church develop a common understanding of the process and its goals.

“I believe if everyone fully understands and works with and implements Title IV in the manner in which it was written, we will achieve our goals of fairness, of justice, of transparency and so forth, creating meaningful opportunities for restoration, for amendment of life, reconciliation to the church,” Getz said.

The work that resulted in the website came in response to Resolution A150 in which the General Convention called in 2015 for the development and implementation Title IV training materials for the church.

The subcommittee joined with Wirth and Diocesan Communications Assistant Halle Oliver to develop the website, which Getz said came in under budget. 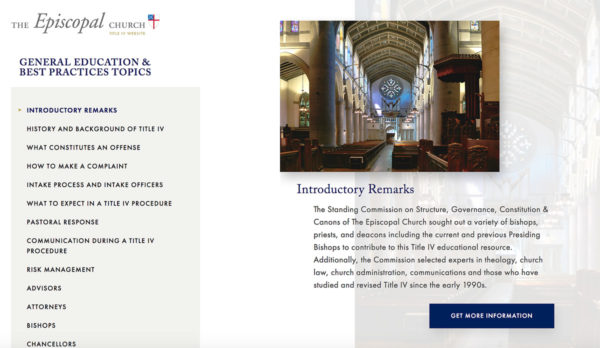 One part of the new website, titled General Education and Best Practices, has about 250 videos on various topics involved in clergy discipline. Each video runs about 2:30 minutes and features Episcopalians who have had experience with implementing the Title IV canons.

One part of the site, titled General Education and Best Practices, has about 250 videos that run about 2:30 minutes each. Getz and Wirth sought a variety of bishops, priests and deacons, including the current and previous presiding bishops, to contribute to the section, its explanation says. There are also contributions from experts in theology, church law, church administration and communications, as well as from those who have studied and revised Title IV since the early 1990s.

“We wanted the broadest possible spectrum of leaders in the church to talk about their experiences, to talk about what they have found to be best practices, flowing from the nitty-gritty of the canons,” Getz said.

The other part of the website is more technical, she explained. It outlines the roles of what she called various “stakeholders” in the disciplinary process. The section offers a method for each participant to understand his or her responsibilities and to see alternatives and possible outcomes at each step of the process, as well as to observe the big picture, according to the page’s explanation.

While information in that section is “derived from the canons after considerable research and reflects each step as determined by a committee of those who are recognized authorities of Title IV, it is not intended to be the sole source of canonical law for use in the Title IV proceedings,” the explanation says.

The site will also offer a frequently asked questions page, a glossary and a library of templates for the many forms used in the Title IV process. The site is optimized to be responsive on all devices from desktop computers to mobile phones. 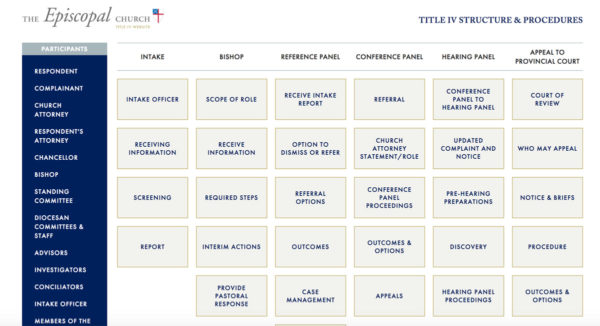 The other main part of the website offers a step-by-step process of a Title IV proceeding for each participant in the process.

Episcopal Church canons have expressed concern about clergy behavior since the General Convention in 1789 made it wrong for clergy — except “for their honest necessities” — to “resort to taverns, or other places most liable to be abused to licentiousness.”

That original Canon 13 also warned that clergy who “[gave] themselves to base or servile labor, or to drinking or riot, or to spending their time idly” would face a range of disciplinary actions.

The church ever since has been refining its answer to the question of how best to discipline errant clergy. The tradition continued at the 77th meeting of General Convention in 2012 when bishops and deputies tweaked the then-current version of the Title IV disciplinary canons that had been in use for just more than a year.

There were more changes to come. In 2015, bishops and deputies approved several Title IV revisions, including adding sanctions for those who may attempt to delay or disrupt the disciplinary process, and allocating money for training materials to help streamline proceedings. As the subcommittee began to do its work, it realized that perhaps it needed to “break out of the mold of how the wider church gets its projects done,” Getz said.

Diocese of Utah Chancellor Steve Hutchinson, who has been deeply involved in Title IV revisions, suggested that the subcommittee work with Wirth. Getz said Wirth brought fresh eyes to the projects and helped the group see there might be a better way to present the training materials than the way that people whom she called the “linear lawyers” have always done it. She said they look at the discipline process and potential training materials through a timeline approach.

Getz said, “People have tried for several years to create flow charts of how Title IV works; I have yet to see one that you could logically follow.”

Wirth told ENS that his work in integrative marketing communications and broadcast news has always been driven by providing material in a way that serves the audience. In the case of the clergy discipline process, there were multiple audiences ranging from clergy to people who feel they have been mistreated to lawyers to every Episcopalian to those outside the church who watch how it handles these issues. He proposed a website built, in part, around the stakeholders in the process so each could learn about their roles and see how they interacted with the roles of others.

An interactive website made sense, Wirth said, because “online learning is not the future; it’s the present.”

Thus, the subcommittee developed a different way to look at the process. Users can click on one stakeholder category, see the squares on the webpage’s grid light up if they relate to that person, and follow those responsibilities for that stakeholder. However, that person can also look at the roles of other participants and how they fit together.

Wirth said he thinks the site’s other goal of presenting best practices and teaching about clergy discipline issues is perhaps even more important that the process side. A major success for the website in his eyes, he said, would be “preventing Title IV incidents” in the future.

As such, the best practices section includes people offering what Wirth called “very frank discussions” about the pressures, stresses and obligations that come with living an ordained life. Clergy promise in their ordination vows to do their best to live their lives “in accordance with the teachings of Christ,” so that they “may be a wholesome example to all people.”

Getz and Wirth said they hope seminaries and local clergy formation programs especially will make use of those videos so that more and more new clergy will be schooled in the process and aware of how to protect the people they are meant to shepherd. Getz sees the website as offering a flexible way for formation programs to provide students with uniform knowledge about the rules and their intentions.

For instance, Getz said, some clergy members are concerned about the canonical requirements that they report when they see what they fear are possible violations by other clergy. They need to understand that such reporting is meant to open the possibility for someone in authority “to intervene where risky or dangerous behavior is noticed and stop the conduct from going further, whether it’s through counseling or issuing a pastoral directive or something else” so that it doesn’t result in some sort of abuse and a claim of clergy misconduct.