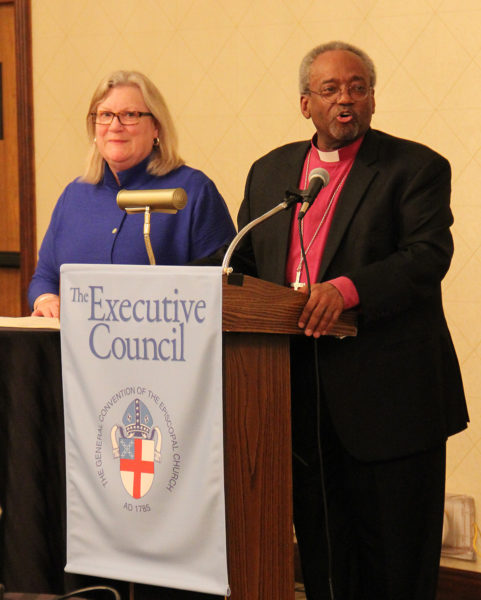 Presiding Bishop Michael Curry, right, and House of Deputies President the Rev. Gay Clark Jennings serve April 22 as the emcees of a dinner during which continuing members of Executive Council honored the service of their colleagues who are completing their six-year terms. Photo: Mary Frances Schjonberg/Episcopal News Service

[Episcopal News Service – Austin, Texas] Tying up loose ends, moving the mission and ministry of the church forward and saying good-bye to half of its members, the Episcopal Church’s Executive Council on April 23 wrapped up its triennial work.

In its last official act of the 2016-2018 triennium, council spent 45 minutes in executive session, reviewing its work during the last three years.

At a news conference after council adjourned, Presiding Bishop Michael Curry said council concluded its work “with laughter, a sense of joy and a sense of accomplishment.”

“We got some stuff done. We faced some difficult issues. We faced them, we figured them out, we said our prayers and did some pretty darn good work,” he said.

House of Deputies President the Rev. Gay Clark Jennings said that council and the church’s executive leadership team have clarified their roles and responsibilities, as well as their obligations to each other and the wider church.

“It’s been a lovely journey, and I think we’ve grown immensely in our respect for one another,” she said. “We trust one another. We don’t always agree with each other, but we seem to be able to just keep at it. When we don’t agree or when we have an issue, my experience has been that we speak the truth in love.”

The Episcopal Church has a tradition of calling leaders who bring wisdom, spiritual centeredness and deep experience, said the Rev. Michael Barlowe, the executive officer of General Convention and secretary of the council. Curry and Jennings, he said, embody that tradition.

Both Jennings and Curry said they are looking forward to returning to Austin for the 79th meeting of General Convention in early July. “The Jesus Movement is beginning to grow roots,” Jennings said, adding that she is excited to discover what new ideas will bubble up at convention. Curry agreed, saying he anticipates that this meeting of convention “will be going deeper.” 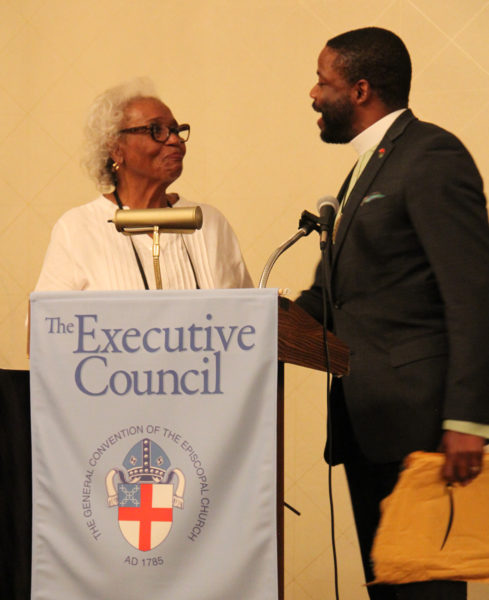 On April 23, the outgoing chairs of council’s five committees gave their final reports. Some included exhortations about the future work of the council as leaders in the Episcopal Church. Anita George, chair of the council’s Joint Standing Committee on Advocacy and Networking, said that her committee is charged with “giving voice and connecting Episcopalians for the purpose of advancing the work of joining in God’s mission of justice, peace, reconciliation and transformation.”

Achieving that goal begins with each Episcopalian, George said, including its leaders. During this meeting, George said Advocacy and Networking members “engaged in lengthy deliberations regarding the ongoing and critical need for Executive Council and the Episcopal Church to engage in deep training and discussions around racism and racial reconciliation.”

Committee members discussed the fact that “many examples of incidents within and without the church remind us that the work is far from over,” George said.

The committee “urges the church to require all leaders of the Episcopal Church, including Executive Council, to engage in antiracism training and deep conversations around race,” George said. “It further encourages the church to engage in discussion to explore the use and power of potentially harmful language when interacting with the wide and diverse groups that comprise our beloved church.”

The committee said church leaders must recognize that “even with the best intentions we may insult or harm others without sensitivity to inappropriate language when we are engaged with good works,” George said.

George said, as she departs the council, she leaves with “high hopes and very, very high expectations of this body. I challenge you, I challenge you, to remember the faces of God who are not here and who depend on you to continue to make space for them and their voices in the beloved community. I implore you, and I love you.”

She returned to her seat amid a standing ovation.

The Executive Council carries out the programs and policies adopted by the General Convention, according to Canon I.4 (1). The council comprises 38 members – 20 (four bishops, four priests or deacons and 12 laypeople) elected by General Convention and 18 (one clergy and one lay) elected by the nine provincial synods for six-year terms – plus the presiding bishop and the president of the House of Deputies. In addition, the vice president of the House of Deputies, secretary, chief operating officer, treasurer and chief financial officer have a seat and voice but no vote. Thus, 19 members of council will officially finish their six-year terms during General Convention this July. 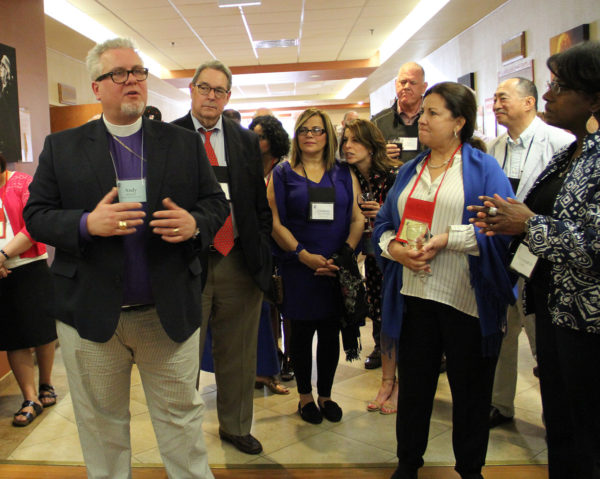 Diocese of Texas Bishop Andy Doyle tells members of the Executive Council and the church-wide staff during an April 22 reception that the diocese is looking forward to hosting General Convention in Austin this July. Photo: Mary Frances Schjonberg/Episcopal News Service

Here are some of the actions that council took on the last day of its three-day meeting:

* The members agreed to provide financial assistance to 13 dioceses and one area mission that have said they need help covering the costs of attending General Convention. All of the entities already receive block grants from the church-wide budget. Bishop of Honduras Lloyd Allen, a council member, said the assistance “is a dream come true. We have cried, we have asked, we have begged.”

Although each entity will receive $1,200, which another council member noted amounts to about $150 per deputy, Allen said the biggest concern has been about help in covering the registration cost, “which has prevented our delegation from being complete at General Convention.”

Each bishop, deputy and alternate deputy must pay a $600 registration fee, in addition to their lodging and transportation costs.

The Rev. Nathaniel Pierce, outgoing council member, noted that council had passed a similar resolution, albeit for a smaller amount, early in 2015 to help cover such costs for the last General Convention. Council needs to consider what he called “the systemic issues” that will continue to prompt this stop-gap funding.

“I, for one, am ashamed that folks have to beg for this money,” he said.

The Rev. Jabriel Ballentine, continuing Executive Council member, said that the block grant recipients do great work with that money “and so to say that we should force people who are doing great ministry to decide between using those limited resources to do ministry or holding onto those resources in order to come to the table [General Convention] is a false dichotomy.”

Outgoing council member Nancy Koonce said that the Joint Standing Committee on Finances for Mission (FFM) has urged its successors to consider this dilemma.

Barlowe agreed that while those entities have been “gracious” in asking for this money, “we shouldn’t constantly have to rely on their graciousness.” The issue, he said, goes to the root of the church’s polity about broad participation in policymaking bodies. He said the council’s executive committee will be considering the issue between the end of the upcoming General Convention and the beginning of council’s next meeting in October. 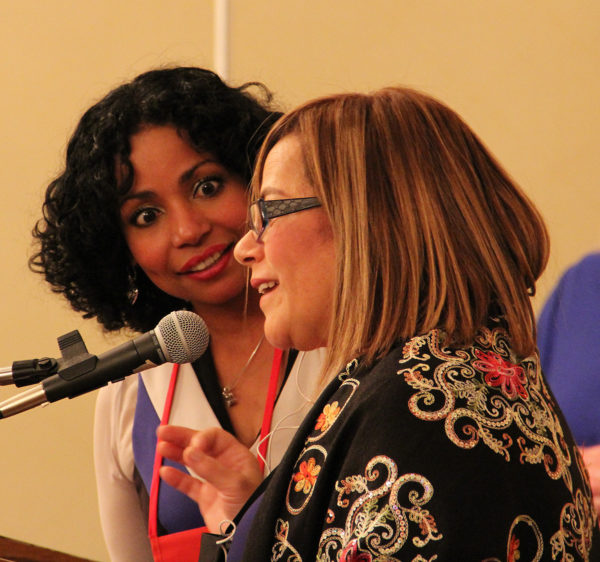 Outgoing Executive Council member Pragedes Coromoto Jimenez de Salazar, foreground, of Venezuela, tells her colleagues that she will continue to work for the good of the entire Episcopal Church. Interpreter Dinorah Padro assisted her during her remarks. Photo: Mary Frances Schjonberg/Episcopal News Service

* Council members heard that a small group of people who have been involved in the church’s triennial budgeting process will convene between now and the start of General Convention to consider how to improve that process. A goal, according to outgoing FFM Chair Tess Judge, would be to establish a process “that allows early involvement by PB&F (the Joint Standing Committee on Program, Budget and Finance), as well as more time for FFM to deal with other matters related to the financial status of the church.”

The church’s Standing Commission on Governance, Structure, Constitution and Canons called in its Blue Book report (beginning on page 402 here) for a task force to reshape the budget process. “The church is mired in a budget process that does not make enough time available for input by the church at large prior to General Convention,” the commission said.

However, when FFM met together April 22 with council’s Joint Standing Committee on Governance and Administration for Mission, the members agreed that it made more sense to address the issues involved immediately.

* The council heard good news about the work of its Assessment Review Committee. The committee has been talking to about 18 dioceses that do not currently pay the full amount of the assessment or who anticipate asking for a partial or full waiver in 2019.

The council’s draft budget, which forms the basis for PB&F’s work at General Convention to craft the 2019-2021 budget, includes a line item reserving $5.9 million for such waivers. Thus, an anticipated reduction in the requested waivers’ dollar amounts would mean that unused money from that reserve could be available to help fund other budget line items.

The council established the committee in early 2015 ahead of General Convention that summer making mandatory the current voluntary diocesan budgetary asking system for the 2019-2021 budget cycle. Each year’s annual diocesan giving in the three-year budget had been based on a diocese’s income two years earlier, minus $150,000. Any diocese that cannot or will not pay the soon-to-be-required percentage of its annual income must ask for a partial or full waiver to avoid any penalty, such as not being eligible for church-wide grants.

* Council members approved a policy on alcohol use by Domestic and Foreign Mission Society employees (DFMS is the name under which the Episcopal Church is incorporated, conducts business and carries out mission). Rooted in General Convention Resolution 2015-A158, which called for such policies, council agreed to the employee policy that puts “appropriate limits on the serving and consumption of alcohol” at DFMS work, gatherings, “activities and celebratory events.”

“Excessive alcohol consumption may endanger the health and safety of DFMS employees and others around them and tarnish the DFMS’ reputation,” the policy says. It added that those who choose to drink alcoholic beverages in such settings “are expected to behave respectfully, professionally, within legal limits, and in accordance with all DFMS policies.”

The policy includes details about availability and consumption of alcohol.

Council’s action came at the end of a meeting during which the members heard Curry summarize the Commission on Impairment and Leadership’s findings and recommendations.

* Council member Polly Getz and Diocese of Utah Communications Director Craig Worth invited the council to help them beta test a new website designed to help educate the church on its Title IV clergy disciplinary process. The site will debut to the public during General Convention this July. Episcopal News Service coverage of that presentation is here.

Summaries of all the resolutions council passed at this meeting are here.