[Episcopal News Service] Episcopalians in the Diocese of Long Island are mourning a beloved priest, the Rev. Paul Wancura, who died this week at age 87 from injuries suffered during a home invasion last month at his home.

No suspects have yet been identified in the attack on Long Island’s East End, and a $10,000 reward has been offered for information leading to an arrest and conviction.

“The sad news of the death of Canon Wancura has touched everyone in our diocese,” Bishop Lawrence Provenzano said late April 17 in a message to the diocese. “Those who knew him well are suffering the loss of a devoted priest and friend who was quick to provide support and prayerful insight to all who sought his counsel. Those who did not know him personally are struck nonetheless by the reported cruelty and violence during a home invasion that resulted in the death of this beloved priest.”

A fellow priest found Wancura on March 19 tied up between a bed and a wall in the elder priest’s Shelter Island home. He had failed to show up as expected at a Sunday service March 18 at Episcopal Church of the Messiah in Central Islip, and church leaders asked the Rev. Charles McCarron, rector of Shelter Island’s St. Mary’s Episcopal Church, to check on him.

The initial police investigation indicated the attacker or attackers may have specifically targeted Wancura, who had been tied up for at least two days when McCarron found him, according to the Shelter Island Reporter.

Wancura was flown to Stony Brook University Hospital in critical condition. His injuries from being tied up led to amputation of a hand. This month, a “slight improvement” in his condition was reported, but he died April 16.

Caroline Church of Brookhaven, where Wancura served as rector for 26 years, said in a Facebook post that his funeral was scheduled for April 24 at the church in Setauket, New York.

“I feel like I lost a beloved uncle,” McCarron, rector at St. Mary’s, told Newsday, saying the cause of death was sepsis.

Wancura, a native of Queens, New York, felt a calling to the priesthood while serving in the Army in Europe during the Korean War, according to Newsday. In 1960, he earned a Master of Divinity degree from General Theological Seminary in New York.

Provenzano’s message noted that Wancura had served the diocese as priest for more than 50 years. His ordained ministry began at Church of the Ascension in Brooklyn, New York, and he was archdeacon of Suffolk County from 1966 to 1974, assisting parishes and missions and providing administrative oversight on behalf of the bishop’s office. 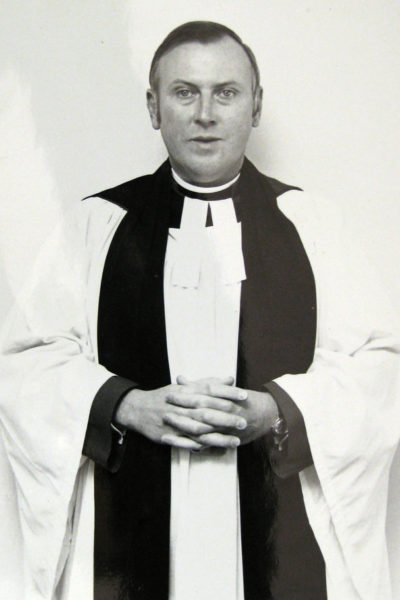 This portrait of the Rev. Paul Wancura is included in a timeline of rectors maintained online by Caroline Church of Brookhaven, where Wancura served from 1974 until his retirement in 2000.

In 1974, Wancura became rector of Caroline Church of Brookhaven on the north shore of central Long Island.

He retired in 2000 but continued to assist churches in the area as needed, and at the time of his death he was the second oldest priest still serving on Long Island, including as a supply priest at Church of the Messiah, Provenzano said.

“Paul was an old-fashioned priest with the sensibility and spirit of a very forward-looking man,” Provenzano said. “He was spry and witty – the kind of person who would engage everyone in conversation and be interested in knowing about everything happening around him. … Not only could he tell a story well, he was always interested in hearing the story of the people he met. His intellect and good humor were a delight to encounter.”

Wancura’s wife died shortly after he retired, and they had no children, friend Kevin Lockerbie told Newsday.

“He was so human,” Lockerbie said. “He understood people’s trials. … He was very connected to the common man because he had been one.”

McCarron remembered Wancura as a dedicated priest, a sharp dresser and a reserved man with a deadpan sense of humor.

“He would make a comment, pause and give you a look,” McCarron told the Shelther Island Reporter. “There was a twinkle in his eye.”

The attack on Wancura is now being investigated as a homicide by Shelter Island and Suffolk County police. A second burglary was reported near Wancura’s house on April 4, and police are trying to determine if the two crimes are connected.

– David Paulsen is an editor and reporter for the Episcopal News Service. He can be reached atdpaulsen@episcopalchurch.org.