The 15 denominations and Christian agencies say that they “cannot be silent” as Gazans have been killed or injured during the first two weeks of protests that are expected to occur until May 15. That is the day when Palestinians mark the “Nakba,” which is Arabic for “catastrophe,” and commemorates the estimated 700,000 Palestinians who fled or were forced off their land during the war that followed Israel’s 1948 declaration of independence from the British mandate of Palestine. That day is expected to be particularly fraught this year because it falls near the day when President Donald Trump plans to move the U.S. Embassy from Tel Aviv to Jerusalem, a controversial shift in U.S. policy.

Israeli soldiers fired live ammunition into crowds of Palestinian protesters, killing 15 and injuring some 1,000 others during the first day of protests March 30, which was the eve of Passover. Some of those injured later died. Close to 30,000 Palestinians had gathered near the fence for what organizers call the “March of Return.” 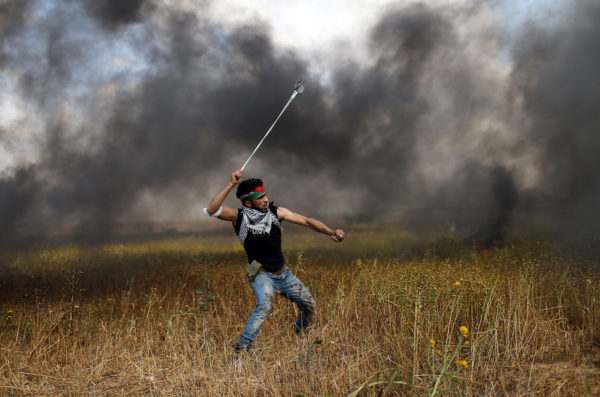 A Palestinian hurls stones at Israeli troops during clashes, during a tent city protest along the Israel border with Gaza, as Palestinians demanded the right to return to their homeland, the southern Gaza Strip March 30. Photo: REUTERS/Ibraheem Abu Mustafa

While the majority of protesters were said to have not engaged in violence, some reportedly used slingshots to shoot stones at Israeli soldiers, lobbed Molotov cocktails over the fence line and sent burning tires rolling to the fence. Israeli Defense Force spokesman Brig. Gen. Ronen Manelis said March 30 that Palestinians were attempting to cross or harm the fence and “IDF troops returned precise fire.” He added that live ammunition was used only against those attempting to harm the fence. The IDF has said Hamas, the militant group that controls Gaza, is exploiting the demonstrations as a cover to carry out terrorist attacks.

Violence broke out again a week later on April 6. Seven Palestinians were killed and about 1,400 injured, including nearly 400 with gunshot wounds, the Gaza Health Ministry said.

The United Nations Office for the Coordination of Humanitarian Affairs has said it found that, in all, 26 people died, including three children, and 445 children were among the injured. OCHA said no Israeli casualties have been reported.

The churches and agencies said in their April 12 statement that they “support the Palestinian people as they courageously stand up for their rights.”

“We have worked in our own context in the cause of justice, peace, and equality, and continue to do so even as we recognize we have too often fallen short in these efforts. We reject the use of violence by individuals, groups or states,” they said. “In the wake of demonstrations that have resulted in tragedy and death, and anticipating the continuation of Palestinian protests over the coming weeks, we cannot be silent.”

The statement outlines a series of steps the groups would like to see taken: 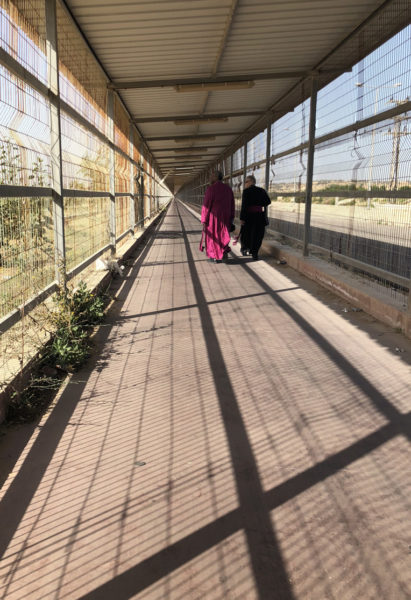 Presiding Bishop Michael Curry, left, and Anglican Archbishop in Jerusalem Suheil Dawani walk March 26 through the barren area between an Israel checkpoint and Gaza City. They were on their way to visit the Anglican Al Ahli Arab Hospital. Their journey took place five days before violence broke out along the fence that separates Israel and the Gaza Strip. Photo: Sharon Jones

The statement said the Palestinians’ efforts to call the world’s attention to their struggle to “recover, their rights — rights as refugees, to demonstrate, and to live in dignity” were met with “an immediate and tragic rejection of those rights.” The denominations and agencies declare themselves “people of hope” who, in the Easter season, believe that those rights will ultimately prevail.

“In this time, we pray fervently, speak clearly, and act diligently in support of peace, justice, and equality,” they conclude.

After the first violence on March 30 and the day before the second round, Churches for Middle East Peace, or CMEP, a coalition of 27 U.S. denominations and organizations of which the Episcopal Church is a member, said, “we fully affirm the right of the Palestinian people to engage in nonviolent resistance.”

The organization said, “Resorting to live fire against unarmed demonstrators is a negligent and inexcusable response that failed to distinguish between those who came to protest peacefully and those with more malicious intentions.”

In a related move earlier this week, Curry signed onto a CMEP letter to Trump calling on the administration to “protect the vulnerable Christian communities in the Holy Land” and oppose official Israeli efforts that it said would financially harm churches.

The letter refers to Jerusalem Municipality’s plan to collect taxes on all church property not used exclusively as houses of worship. Including back taxes, the churches were told to pay approximately $186 million, according to the letter. The Israeli Knesset is also considering legislation that would permit Israel to retroactively expropriate land sold by the Greek Orthodox and Roman Catholic churches since 2010.

The Times of Israel recently reported that the Episcopal Diocese of Jerusalem has been hit with a bill of the equivalent of nearly $2 million. Curry learned during his Holy Week trip to the Holy Land that Muslim religious groups would owe $120 million. Even though the controversial plan was put on hold early in March, the diocese’s accounts are still frozen.