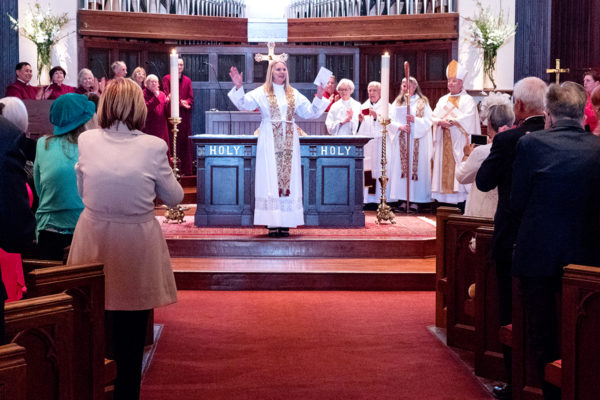 [Episcopal News Service] An Episcopal congregation in Southern California that had been barred from its church for three years amid a property dispute with the diocese has returned to the church with a spirit of reconciliation and hope.

Families are inundating the church with requests for baptisms and weddings, the congregation is ramping up its outreach ministries, and on April 8 worship services resumed at the Newport Beach church for the first time since 2015. What was St. James the Great is now known simply as St. James Episcopal Church.

“It’s like a second startup, so we’re scrambling. But it’s a joyful scramble,” the Rev. Cindy Voorhees, who leads the congregation at St. James, told Episcopal News Service. “We feel like we’re back home. It’s just time to thrive again, and we’re really just focusing on our mission and ministry of outreach.”

She got the keys to the church a couple weeks ago to inspect the structure for any maintenance requirements. Then last week, in preparation for the Eucharist on April 8, 25 to 40 volunteers showed up for five straight days to help clean the church, washing windows, vacuuming floors, scrubbing bathrooms. Voorhees and her staff are still working to get phone, internet and other services fully restored.

Many have described being back in the church as “surreal,” Voorhees said, and the mood among the 300 or so at the Eucharist was “extremely joyful.” 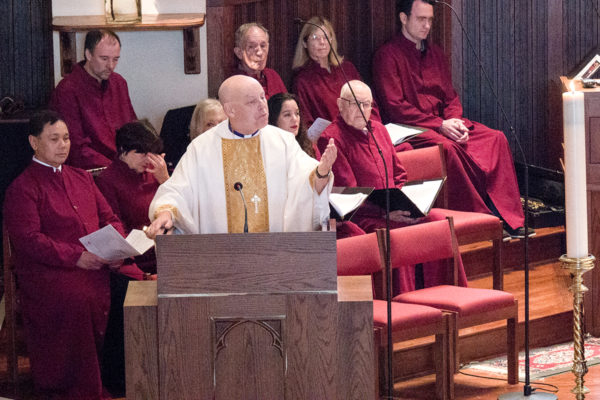 Diocese of Los Angeles Bishop John Taylor preached the sermon. His episcopacy paved the way for the congregation to return to the church. He addressed the property dispute in the sermon, saying negotiations made it hard for him and other church leaders to fulfill their roles as pastors.

“We are reclaiming our pastorship this morning,” Taylor said, drawing a parallel between Jesus’ resurrection and the congregation. He repeatedly invoked a theme of reconciliation.

“We are inviting everyone in our diocese to come home to a new sense of belonging, of being at home with one another in the diocesan family,” he said. “Reconciliation, my friends, is for any herder who has squabbled with another one.”

The property had been at the heart of disciplinary proceedings last year against Taylor’s predecessor, Bishop J. Jon Bruno, for his attempts to sell the church building. Members of St. James the Great had been forced to worship in a Newport Beach Civic Center community room while the property remained in dispute.

The disciplinary hearing panel found Bruno guilty of the St. James complainants’ allegations and said he should be suspended from ordained ministry for three years because of misconduct. Bruno retired at the end of November, and Taylor took over as diocesan bishop on Dec. 1.

In November, the Diocese of Los Angeles released a statement outlining a plan for future use of the church property, including the eventual resumption of worship services there by the congregation. The diocese plans to use part of the facility for its Redeemer Center for Diocesan Ministries.

The diocese also committed to helping St. James regain mission status. For now, it is a mission station with Voorhees as bishop’s chaplain. She hopes the diocesan convention in December will consider granting mission status.

Until then, St. James has plenty to do. Although it had continued to pursue outreach ministries while worshipping at the Civic Center, it now will be able to resume after-school programs and step up other initiatives serving children in the area. 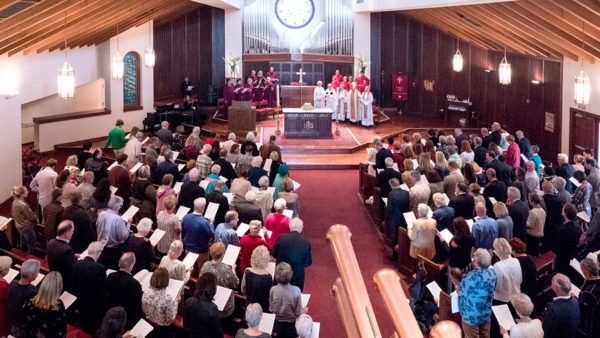 About 300 people attended Eucharist on April 8 at St. James Episcopal Church in Newport Beach, California. The congregation had previously been barred from the church due to a property dispute with the diocese. Photo: Lissa Schairer

And Voorhees said the church has a backlog of baptisms to schedule – her own 2-year-old granddaughter among them. Not many families wanted to hold baptisms in the Civic Center, so they waited and hoped.

St. James also is fielding a sudden barrage of calls about weddings. It is located next to a boutique hotel, which makes it something of a destination for engaged couples planning their ceremonies and receptions, Voorhees said.

This is a big change from just a couple weeks ago, when the congregation was forced to find a temporary place of worship for Good Friday and chose to join with a local Baptist church, and it celebrated Easter with a Eucharist at the Civic Center. Things are starting to return to normal, though Voorhees said her congregation remains committed to reconciliation work with the diocese.

“There’s rebuilding that has to go on, and I think that everyone is willing and wanting to do that,” she said.