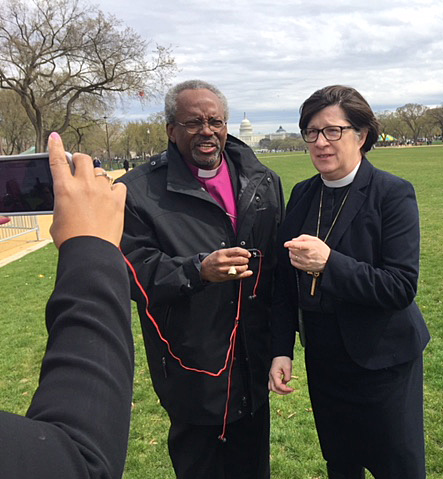 Presiding Bishop Michael Curry and Evangelical Lutheran Church in America Presiding Bishop Elizabeth Eaton, both of whom were bumped from the A.C.T. to End Racism Rally lineup due to weather delays, prepare to record a video message from the National Mall in Washington, D.C. Photo: Neva Rae Fox

[Episcopal News Service] Looking back on the horrific assassination 50 years ago of the Rev. Dr. Martin Luther King Jr. and looking forward to the end of racism, Episcopalians came with thousands of others to the National Mall in Washington, D.C., April 4 for the A.C.T. to End Racism Rally.

The day began cold and windy, and just before noon organizers delayed the rally for nearly 45 minutes out of concern for what one unidentified woman at the microphone called “a rapidly moving weather front” approaching the capital. She asked rally marshals to help attendees find cover in nearby museums, including the Smithsonian Institute.

That weather delay caused the organizers to reshuffle the lineup of more than 60 speakers. Both Presiding Bishop Michael Curry and Evangelical Lutheran Church in America Presiding Bishop Elizabeth Eaton were bumped from the list. Curry was scheduled to lead off the rally’s last section, which formed a call to action and next steps.

Instead, as the rally went on, he recorded a video message for the National Council of Churches, organizer of the event, to use.

“We will act now, and we will act for our future, joining our brothers and sisters so that the future for our children will be a future worthy of them,” Curry said as he stood on the mall with the U.S. Capitol in the background.

Curry said people gathered for the rally to “act now to engage in the work of seeking to eradicate racism and its vestiges in our country, and in our world.

“We do so not simply to remember the past, but we do so to learn from the past in order that we might live and enter a transformed future.”

Pointing over his shoulder to the Capitol, the presiding bishop said the building symbolizes “hope for our children – for generations of children yet to be born.” It is a hope, he said, “that there is equal opportunity for education no matter who they are, that there are voting rights for all citizens of this great country because all of us have been created in the image and likeness of God, as it says in the first chapter of Genesis, so that America will truly be America: a land of liberty, a land of justice, a land of equality.”

Curry pledged the Episcopal Church’s commitment to making that hope a reality. “On this day and the days going forward, we as Episcopalians join with our fellow Christians and other people of goodwill and of all faiths and types who seek to make this world something that more closely resembles God’s dream and not a human nightmare,” he said.

The rally’s speakers, each of whom were given a short amount of time at the microphone and many of whom ran over their time, included Christian, Hindu, Jewish, Islamic and Zoroastrian leaders. Secular activists spoke as well, including actors, singers, doctors and Ben Cohen and Jerry Greenfield, the founders of Ben & Jerry’s.

Cohen told the crowd that if he and Greenfield had been black, the ice cream company would not exist. “The deck would’ve been just too stacked against us,” he said.

We’re proud to have our cofounders Ben and Jerry speaking about systemic racism in America at #Act2EndRacism in DC. https://t.co/WNjrBZnv3Y

The NCC said earlier that the rally “is part of a movement to change the horror of the assassination into a strong witness for ending racism.”

The NCC, to which the Episcopal Church and nearly 40 other Christian traditions belong, vowed to “pick up the torch and carrying on with a multiyear effort to finish the work Dr. King began.” The effort is also endorsed by an ecumenical group of religious organizations.

A.C.T. stands for awaken, confront and transform, and the NCC says its goal is to remove racism from the nation’s social fabric and bring the country together. The night before the rally, many participants met at Saint Sophia Greek Orthodox Cathedral in Washington, D.C., to pray for an end to racism. The service took place on the Greek Orthodox Church’s Holy Tuesday, a day with a liturgy that is noted for its theme of repentance, according to the cathedral’s website.

The rally and surrounding events will be followed April 5 by a National Day of Advocacy & Action. The day will include training in how to organize effective legislative visits and other aspects of such advocacy work, as well as actual visits to congressional offices.

Curry’s planned participation in the rally was part of the Episcopal Church’s larger pledge “to act faithfully on its long history of honorable General Convention and Executive Council intentions but imperfect and fragmentary practical actions in matters of poverty, racism, sexism, and economic justice,” as the church’s Executive Council said in a resolution it passed at its January meeting. That resolution called for the church to develop an official relationship with the 2018 Poor People’s Campaign: A National Call for Moral Revival. 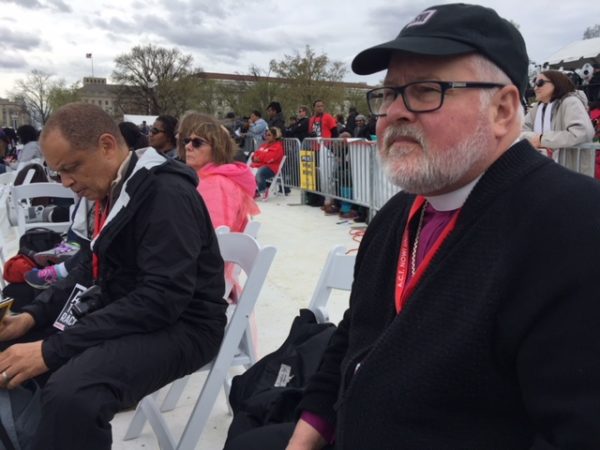 The Episcopal Church is in the midst of a season of justice engagement, the Rev. Chuck Wynder, the church’s officer for social justice and advocacy engagement, told Episcopal News Service. That season has already included Episcopalians’ participation in the March 24 March for Our Lives.

“One of our goals is to be in the public square on this 50th anniversary of the assassination of Dr. King,” Wynder said. “And, as a member church of the NCC, to participate actively in this long-term initiative to end racism by engaging in work and ministries of racial justice, racial equity and racial reconciliation both inside the church and in our communities.”

He said that, by being involved in the A.C.T. rally, the Episcopal Church can “be in the public square and to state publicly on this very important day where we’re going and where we hope to go.”

Wynder said the church’s involvement is also a way for Episcopalians to live into the Becoming Beloved Community effort that offers the Episcopal Church ways to organize its many efforts to respond to racial injustice and grow a community of reconcilers, justice-makers and healers. Getting involved in the 2018 Poor People’s Campaign is a significant step in that direction, he said.

The 2018 campaign echoes King’s plan in 1968 for a Poor People’s Campaign, a plan he announced in a sermon on March 31, 1968, from the pulpit of Washington National Cathedral. 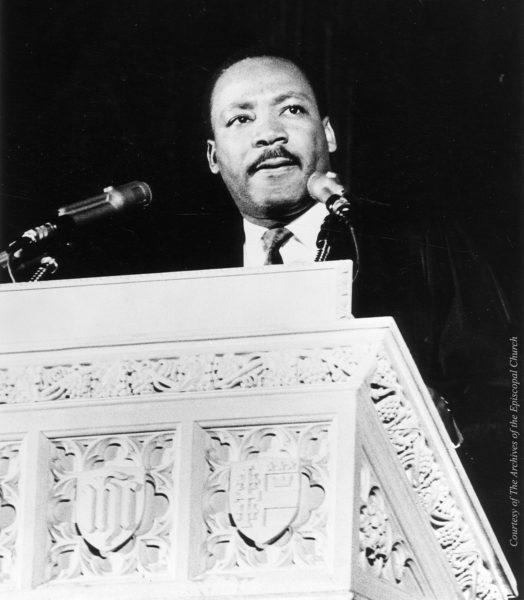 Four days before he was assassinated in Memphis, Tennessee, the Rev. Dr. Martin Luther King Jr. preached his last Sunday sermon at Washington National Cathedral. “There comes a time when one must take the position that is neither safe nor politic nor popular, but he must do it because conscience tells him it is right,” King said. Photo: The Archives of the Episcopal Church

“There is nothing new about poverty. What is new is that we now have the techniques and the resources to get rid of poverty. The real question is whether we have the will,” King said in what would be his last Sunday sermon before his death.

King assured the congregation that this would not be a “histrionic gesture” or one meant to cause violence. “We are coming to demand that the government address itself to the problem of poverty. We read one day, ‘We hold these truths to be self-evident, that all men are created equal, that they are endowed by their Creator with certain inalienable Rights, that among these are Life, Liberty, and the pursuit of Happiness.’ But if a man doesn’t have a job or an income, he has neither life nor liberty nor the possibility for the pursuit of happiness. He merely exists,” he said.

“We are coming to ask America to be true to the huge promissory note that it signed years ago. And we are coming to engage in dramatic nonviolent action, to call attention to the gulf between promise and fulfillment; to make the invisible visible.”

Those demonstrations had been tentatively set for June 15, 1968. King was gunned down on April 4 by an assassin in Memphis, Tennessee, four days after his sermon at Washington National Cathedral. Thousands of people spilled out of the cathedral on April 5 to mourn his assassination.

The cathedral will commemorate King’s sermon on April 4 with a choral evensong that will include scripture and music associated with the recognition of King. Following the service, the cathedral will play the sermon, titled “Remaining Awake Through a Great Revolution.” A non-downloadable audio recording is here.

Washington National Cathedral also will participate in a worldwide tolling of church bells the evening of April 4. The toll will begin with the bells at the National Civil Rights Museum in Memphis at 6:01 p.m. CDT, followed by bells throughout that city, and then across the country and the world. The cathedral’s bells will sound at 7:05 p.m. EDT. Many Episcopal churches plan to join the tolling.

The Very Rev. Randolph Marshall Hollerith, dean of the cathedral, recently noted that King was invited to preach in the cathedral to “explain ‘to the white clergy and the people of Greater Washington’ that his planned Poor People’s Campaign was intended to be ‘non-violent’ and not ‘disruptive of life in Washington.’” However, some Episcopalians protested the invitation. “It appears obvious that King’s purposes are definitely racist (one group only) and whose goal is to stir up more racial tension and anxiety, which can only lead to disaster,” one woman wrote.

The cathedral will also commemorate King’s last sermon during its 11:15 a.m. Eucharist on April 8. The service will include recorded excerpts of King’s sermon along with music and prayers from the March 31, 1968 service. 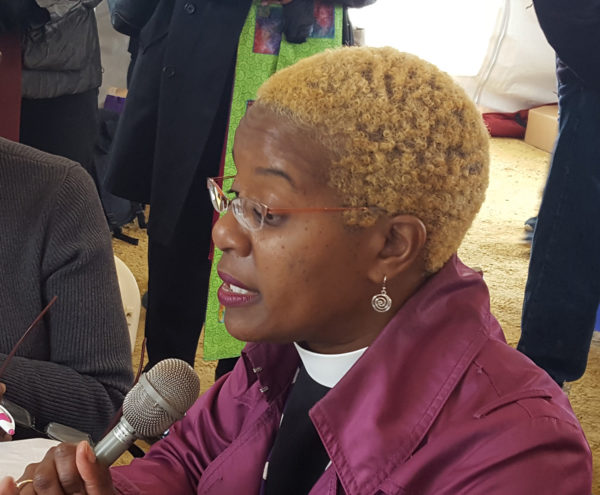 The Rev. Canon Stephanie Spellers, the presiding bishop’s canon for evangelism, reconciliation and creation care, is interviewed in the media tent April 4 during the A.C.T. to End Racism Rally. Photo: Neva Rae Fox

And, in Memphis on April 7, St. Mary’s Cathedral in the Diocese of West Tennessee will host a commemoration of the April 5, 1968 Ministers March, during which about 300 clergy gathered at the cathedral the day after King was killed about two miles away.

The Very Rev. Andy Andrews, St. Mary’s dean, said in a recent letter that those clergy members, “after prayer and soul-searching discussion,” adopted a statement favoring the striking city sanitation workers whom King had come to the city to support. Approximately 150 ministers then marched from St. Mary’s to the mayor’s office to present their demands. Then-Dean Bill Dimmick led the march with the cathedral cross.

“The cathedral congregation has never been the same,” Andrews said in his letter.

St. Mary’s is hosting an all-day interfaith event April 7 that will include a block party and a worship service featuring some of the clergy who were at the original march. The march will also be re-enacted, and marchers are scheduled to meet with current Mayor Jim Strickland, whom Andrews said will “welcome us in a different fashion than Mayor [Henry] Loeb 50 years ago.”