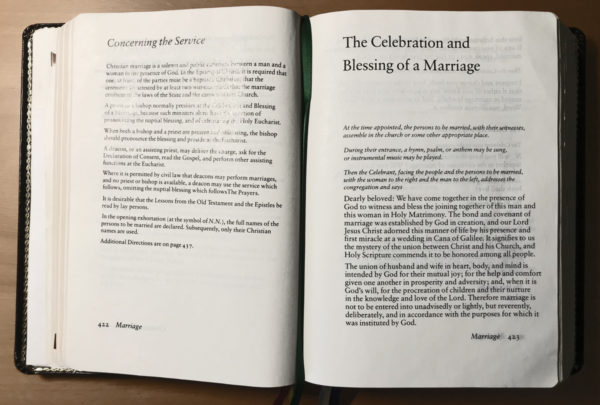 General Convention’s Task Force on the Study of Marriage is proposing a number of changes and additions to the Book of Common Prayer’s marriage rites and definitions, as well as finding ways to minister to those who live in monogamous relationships outside of marriage. Photo: Mary Frances Schjonberg/Episcopal News Service

[Episcopal News Service] General Convention’s Task Force on the Study of Marriage has made significant recommendations that would expand the Episcopal Church’s decision to allow same-sex couples access to sacramental marriage, and it is also asking convention to look beyond marriage.

In its Blue Book Report, released April 3, the task force proposes to add to the “Enriching Our Worship” series two rites for blessing relationships. They are intended for couples that want to formalize their monogamous, unconditional and lifelong relationships but not get married.

“The Witnessing and Blessing of a Lifelong Covenant” would be for use in jurisdictions of the Episcopal Church in which the couple desiring marriage is of the same sex and when the civil jurisdiction in which the marriage would occur does not allow marriage of same-sex people, the task force said.

A second new rite, “The Blessing of a Lifelong Relationship,” is intended for couples who desire to formalize their monogamous, unconditional and lifelong relationships that are “something different than a marriage in that [they do] not include the merging of property, finances or other legal encumbrances.” It could also be used by couples for whom the requirement to furnish identification to obtain a marriage license could result in legal penalties, including deportation because of immigration status, the task force said.

The rite “shall not be used for mere convenience,” according to the proposed resolution.

Diocesan bishops would have to approve use of the rites, and no member of the clergy would be required to officiate at such blessings.

A couple’s desire to use the second rite might be prompted, the task force said, by the needs and rights of children of a former marriage; a need to maintain individuals’ ability to uphold the financial obligations and commitments of their household; and a desire to maintain their ability to support themselves with shelter, food and health care, recognizing that a new marriage would cut off the benefits they receive from their former spouse, and if their subsequent marriage should end in death or divorce, they would be left without any pension or health care.

Younger members of the task force asked the group to consider how the church could develop pastoral resources that recognize the rising rate of U.S. adults who live in sexually intimate relationships other than marriage. The resources could include “spiritual practices, to aid individuals and couples in discerning their vocation to relationship, be it to singleness, celibacy, marriage and/or parenting,” according to the resolution.

The resolution’s explanation says that, in 2016, approximately 18 million U.S. adults were in cohabiting relationships, a 29 percent increase over a nine-year period. About 4.1 million of those people were age 50 and older.

When it comes to nuanced and sensitive guidance and teaching regarding sexual intimacy, many people feel largely alone, the task force said in its report, “having found the church’s counsel to remain sexually abstinent outside of marriage insufficient and unreflective of their experience of the holy in relationship.”

The resolution says that development of the resources would be guided by this statement: “Qualities of relationship that ground in faithfulness the expression of sexual intimacy include fidelity, monogamy, commitment, mutual affection, mutual respect, careful and honest communication, physical maturity, emotional maturity, mutual consent, and the holy love which enables those in intimate relationships to see in each other the image of God.”

The Rev. Susan Russell, a task force member, told Episcopal News Service that passage of the resolution would be “a pretty radical step forward” but one that would acknowledge the couples who are involved in these sorts of relationships. “If the church has nothing to say to them, we’re increasingly irrelevant,” she added.

The presiding bishop and the president of the House of Deputies would appoint a new task force to develop the resources.

Task Force Chair Joan Geiszler-Ludlum said both the new rites and this latter proposal would be the church’s way to help couples “elevate” their relationships “from just being casual or temporary.”

“It’s not marriage and it’s not going to be marriage, but we want to recognize it for what it is, and then say that the couples need to be discerning about what they’re doing with their relationship. We want to help them do that discernment.”