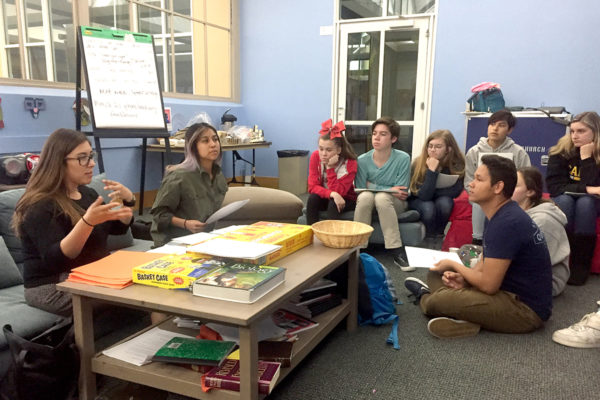 Representatives from Day One, a nonprofit youth empowerment group, meet with youth group members at All Saints Episcopal Church in Pasadena, California, for a training in political advocacy and lobbying. The youth group members will travel to Washington, D.C., this week for the March for Our Lives on March 24. Photo: Juliana Serrano/All Saints, Pasadena

[Episcopal News Service] Episcopalians and Episcopal leaders from across the U.S. are traveling to Washington, D.C., this week for the March for Our Lives on March 24, while others plan to attend corresponding local rallies centered on a shared message: Something must be done to stop gun violence, especially against young people.

Episcopalians attending the Washington march or marches in other cities are encouraged to use the hashtags #MarchEpiscopal and #episcopal when posting to social media from the events, and follow the updates here on Episcopal News Service.

Preparations are well underway. In Chicago, a group of young Episcopalians spent their evening March 20 creating the signs they will take with them to the march in Washington. Members of All Saints Episcopal Church in Pasadena, California, will rise early March 22 to send off a youth group flying to Washington. And in Upper Montclair, New Jersey, church leaders are putting the final touches on a temporary memorial to the victims of two deadly school shootings.

“This is not politics. This is gospel,” the Rev. Melissa Hall, rector at Montclair’s Church of St. James, said. “We just love our children and want to keep them safe.”

St. James’ memorial features T-shirts draped over poles in front of the church. On one side of the churchyard are 17 shirts, one for each of the students and adults killed Feb. 14 in the high school shooting in Parkland, Florida, that sparked the youth-driven movement behind March for Our Lives. On the other side of the churchyard, 26 more shirts memorialize the young children and educators shot and killed at Sandy Hook Elementary School in Newtown, Connecticut, in 2012.

Hall and the Rev. Audrey Hasselbrook, assistant rector at St. James, came up with the idea for the memorial in the days after the Parkland massacre as they were asking themselves what they could do about gun violence. “We kind of put our heads in our hands and said, how many more times can we preach about this?” Hall said.

In addition to the memorial, St. James will host an evening service and candlelight vigil at 5 p.m. March 24. Although it is separate from the marches planned around the country, the church will show solidarity with the cause by singing hymns, joining in prayer and tolling its bell for the victims of gun violence.

Episcopalians in numerous dioceses have organized bus trips to Washington, D.C., to attend the main March for Our Lives. Diocese of Newark Bishop Mark Beckwith, who will join a six-bus convoy organized by the Lutheran Episcopal Advocacy Ministry of New Jersey, lamented “the scourge of gun violence” in a blog post March 21.

“I am going to Washington this Saturday in part to follow the passion of young people, but more than that, and deeper than that, I am going to follow Jesus – who, with his unwavering commitment to nonviolence, regularly stepped into the crucibles of power that condoned, if not fostered, violence,” Beckwith said.

Beckwith, one of the convening Episcopal bishops in the group Bishops United Against Gun Violence, noted “a groundswell of support” for gun reforms, such as raising the legal age to buy guns, expanding background checks for gun purchases and banning certain assault-style weapons. He also heralded the “eloquence and outrage” of students from Parkland’s Marjory Stoneman Douglas High School in the wake of the deadly attack at their school.

He invoked the Palm Sunday story of Jesus’ entry into Jerusalem as a model for challenging the power structures that perpetuate injustice.

“His witness endures, and I believe we are meant to draw on his example and follow him, nonviolently, into this evolving cultural chasm,” Beckwith said. “And not give up, and not be stopped.”

Beckwith and many other Episcopalians making the journey to Washington plan to attend an interfaith vigil March 23 at Washington National Cathedral. The Diocese of Washington is helping to arrange accommodations for some of those coming from out of town, and the diocese also is coordinating its members to march as a group down Pennsylvania Avenue toward the Capitol during the March for Our Lives.

“We are not alone in this work,” Washington Bishop Mariann Budde said in a February blog post about the march. “The country’s conscience has been awakened and people from all sectors, many faiths, and every point on the political spectrum are responding.”

Episcopal teenagers are among the wave of young people who have spoken out against gun violence and helped organized demonstrations in response to the Parkland shooting, and they will be at the forefront of the upcoming marches.

The Episcopal formation group Forma has assembled a guide for bringing young people to protests or marches like the ones scheduled for March 24. The Episcopal Church also provides general guidelines for traveling with youth.

All Saints in Pasadena is sending 10 youth group members along with its youth director, Jeremy Langill, and its rector, the Rev. Mike Kinman, to Washington for the march. The trip was made possible by donations from members and friends of the congregation, said the Rev. Susan Russell, senior associate rector for communication at All Saints.

They also will meet March 23 on Capitol Hill with staff members of Rep. Judy Chu, a California Democrat that represents Pasadena. Other youth group members who will remain in California plan to meet with Chu herself at her district office on the same day.

Day One, a nonprofit youth empowerment group, met with the youth group this month to train them on lobbying lawmakers while explaining what to expect during the meetings, Russell said.

“We are working with our youth to equip them to amplify their voices as part of the March for Our Lives,” Russell said.

At All Saints’ Episcopal Church in Chicago, some of the young people who will travel to Washington, D.C., gathered March 20 to make anti-violence signs. All Saints’ is partnering with four other Episcopal congregations in the diocese to rent two buses for the trip. About 110 people will leave Friday evening, march on Saturday and be back home in time for Palm Sunday worship, said the Rev. Bonnie Perry, rector at All Saints’.

“This is like Jesus going to the capital. That’s why I really wanted us to go to D.C.,” Perry said, echoing Beckwith’s biblical Palm Sunday reference. “This is a pilgrimage. It’s a spiritual pilgrimage, it’s a Lenten discipline. This is what we’re called to do.”

Traveling to the nation’s capital isn’t the only way to participate. Chicago Bishop Jeffrey Lee issued a call to his diocese to get involved, if not by joining the march in Washington then by marching with him in Chicago or being with marchers in spirit.

“Wherever you are, please pray that God will console, sustain and heal all whose lives are touched by gun violence, and that God will make evident the work that we are being called to do to end this scourge,” Lee said.

That and other Episcopal-led efforts on March 24 are included in a list compiled by Bishops United Against Gun Violence. Here are some other highlights:

Bishop Daniel Gutierrez of the Diocese of Pennsylvania invites those who are marching to come for a blessing March 23 at a service at St. Stephen’s Episcopal Church in Philadelphia in honor of Oscar Romero, a Salvadoran archbishop of the Roman Catholic Church who fought social and economic injustice until he was assassinated while saying Mass on March 24, 1980. Episcopalians from the diocese are planning to attend marches in Philadelphia and Washington.

The bishops of the Diocese of Virginia said in a March 21 statement that they “choose to spend Saturday with young people and others from our congregations and communities to say no to gun violence. We join with responsible gun owners and with others who have a wide variety of views toward guns. We speak not against responsible gun ownership, but against an idolatry of guns that has caused devastating ruin and destruction within our borders. We invite the people of this diocese to join in saying no to violence and yes to life.” Diocesan Bishop Shannon Johnston will march in Richmond, Bishop Suffragan Susan Goff will be in the march in Charlottesville and assisting Bishops Bob Ihloff and Ted Gulick will take part in the Washington, D.C. events.

The Episcopal cathedral in Boston is being converted into a sort of hospitality and training center for marchers in that city. The Cathedral Church of St. Paul in Boston plans to serve as a gathering place for participants in the city’s March for Our Lives beginning at 10 a.m. The gathering will offer youth-led trainings and other organizing activities before the group leaves for the march at the end of the morning.

The Diocese of Connecticut is holding a morning event, Equipping and Empowering God’s Women: A Way Forward, in recognition of International Women’s Day. When the event at the cathedral in Hartford concludes at 12:30 p.m., participants are invited to join a procession to the state capitol for Hartford’s March for Our Lives event.

Diocese of Central New York Bishop DeDe Duncan-Probe plans to attend a March for Our Lives rally in Syracuse. She discussed Christian responses to gun violence in a Facebook Live video on March 20.