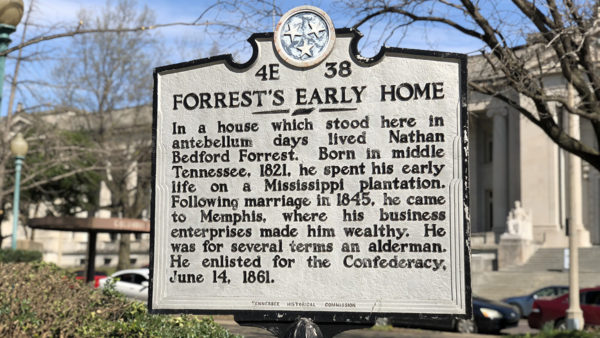 [Episcopal News Service] A previously little-known piece of history just outside the doors of Calvary Episcopal Church in Memphis, Tennessee, is being brought to light as the church prepares to dedicate a historical marker at the pre-Civil War site of the Forrest Slave Mart. 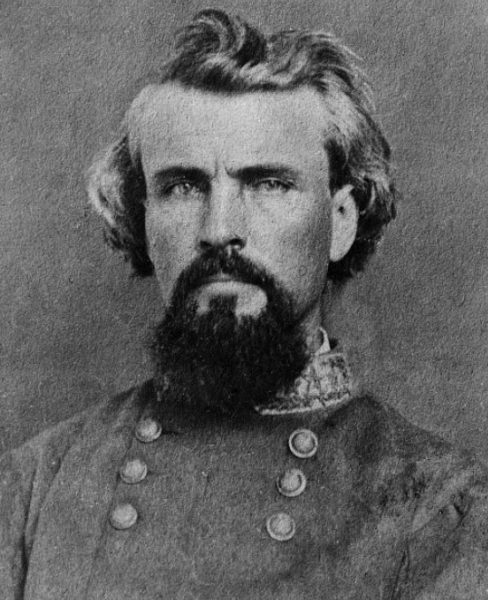 Nathan Bedford Forrest was a slave trader who served as a Confederate lieutenant general during the Civil War and later was an early member of the Ku Klux Klan. Photo: Library of Congress, via Wikipedia

An existing historical marker on Calvary’s block notes that it once was the home of Nathan Bedford Forrest, a 19th-century businessman and Confederate general, but the marker fails to convey the more disturbing context: Forrest was a slave trader, and from 1854 to 1860 he operated a slave mart on property that the church now owns and uses as a parking lot.

The Rev. Scott Walters, rector at Calvary, called it “chilling” to think of the inhumanity that once occurred every day on land located just beyond the church wall behind him when he stands at the pulpit every Sunday. But the effort to research the full history of that block has been infused with a spirit of reconciliation as much as an interest in revealing ugly truths.

“We don’t want it to be a divisive thing but a truth that can be told that can lead to some healing,” Walters said in an interview with Episcopal News Service.

The new historical marker, to be dedicated April 4 as Memphis marks 50 years since the assassination of Martin Luther King Jr. in the city, is the product of a research project led by history professor Timothy Huebner, who is a member of Calvary Episcopal Church.

“It’s not that the existing marker isn’t factually accurate. … It just leaves out a lot,” Huebner told ENS. “And so that’s what we’re trying to do. We are trying to tell some of what has been left out that has to do with the history of that site.”

An organization called Lynching Sites Project Memphis, whose mission is to accurately tell the history of racial violence in and around the city, first drew attention to the existing historical marker in 2015. Organizers held a prayer service calling for the sign to be changed to make clear that Forrest’s “business enterprises” were the selling of humans.

At the same time, the Episcopal Church has made racial reconciliation one of its three priorities during the current triennium. Some dioceses already had taken up their own efforts to confront hard truths about their complicity with slavery, segregation and lynchings. Notable examples include the Diocese of Atlanta and the Diocese of Tennessee, which encompasses the central third of the state but not Memphis.

In 2016, Huebner and others at Calvary Episcopal Church formed a group to learn more about the church’s block and surrounding properties. Their inquiries initially focused on blighted buildings and ways the congregation could help improve the neighborhood, but Huebner’s preliminary research soon gravitated toward Forrest’s historical activities on the block. 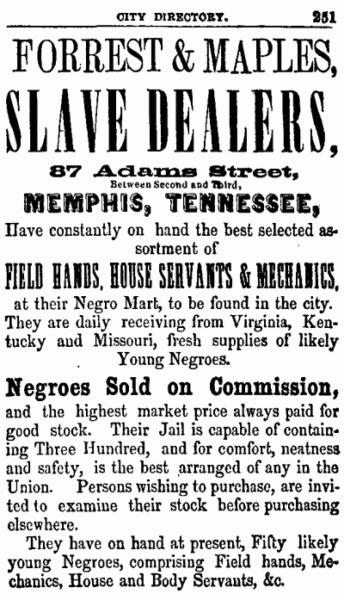 A Memphis city directory from the 1850s shows an ad for the slave mart run by Forrest and a business partner.

“We did not know at that point that he operated the slave mart at that actual site,” Huebner said. “We didn’t learn that until later.”

He uncovered those surprising details in newspaper advertisements and city directories from the 1850s. It also became obvious that the Tennessee Historical Commission would have looked through the same records and, therefore, been well aware of the Forrest slave mart when it drafted the text for its historical marker on the block, dedicated in 1955.

Huebner, who teaches at Rhodes College, chose to make Forrest the subject of his historical methods course in fall 2017. His 15 students researched Forrest’s life, as well as the history of that city block, and they determined that thousands of enslaved men, women and children were sold at the slave mart Forrest operated there.

The students also found that Forrest, one of at least eight slave traders in Memphis during the 1850s, was engaged in importing slaves from Africa, which had been outlawed by the U.S. in 1808. 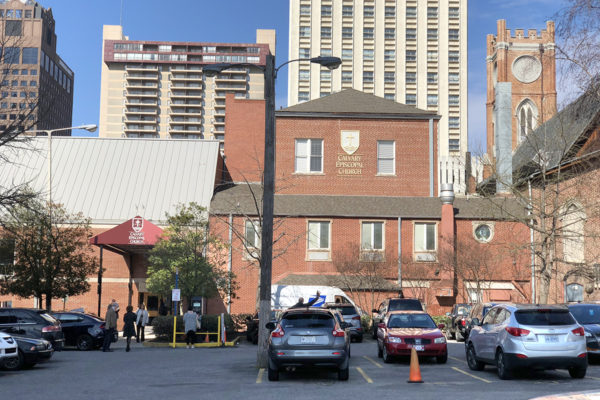 The church was built in 1843, meaning the slave trading and Christian ministry were conducted nearly side by side for several years. No evidence has been found, however, that Forrest was a member or benefactor of the church.

His legacy in Memphis generated additional debate last year when a City Council vote led to the removal of a statue of Forrest from a city park in December. State legislators now are considering legislation that would punish local officials for such actions. Scrutiny of Confederate monuments intensified nationwide in August after a white supremacist rally in support of a Confederate statue in Charlottesville, Virginia, ended in deadly violence there.

In Memphis, Huebner’s students drafted the text on the new historical marker about Forrest. A group of local scholars vetted their research. The marker itself was paid for by the National Park Service. The students also have identified dozens of the slaves who were sold at the slave mart, and some of those names will be read during the dedication ceremony.

“That’s been poignant to me, realizing the names of real people and real lives and families are behind these statistics,” Walters said.

The dedication is part of a full slate of events on April 4 in Memphis, where the National Civil Rights Museum is leading commemorations marking 50 years since Martin Luther King Jr. was shot and killed at the Lorraine Motel, about a mile from Calvary Episcopal Church.

Calvary’s ceremony is described as a “Service of Remembrance and Reconciliation,” and it will be led by Walters and the Rev. Dorothy Wells, the rector at St. George’s Episcopal Church in nearby Germantown, Tennessee, and a 1982 graduate of Rhodes College who worshiped at Calvary when she was a student.

Wells, in an email to ENS while she finishes up a pilgrimage in Israel, said she was as surprised as anyone that a slave mart once operated nearby “as well-heeled worshippers came and went past it, week after week, apparently never questioning the trading of human lives for the proverbial few pieces of silver.”

Wells, who is black, also wonders if some of her own ancestors might have among those sold by Forrest.

“While it has been hard to process, I cannot dwell on that past – but only on the hope that the future holds,” she said. “I still believe that reconciliation is possible – but only if we as a nation are committed to truth-telling.”