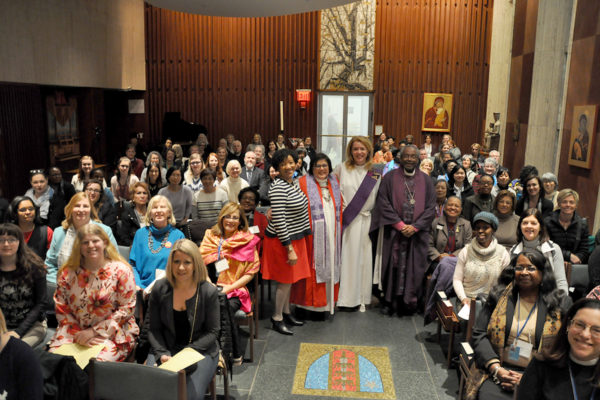 Presiding Bishop Michael Curry stands with, from left, Lay Assistant Nadyne Duverseau, Montana Bishop for Native American Ministries Carol Gallagher and the Rev. Carey Connors of Fredericksburg, Virginia, amidst the congregation that celebrated the opening Eucharist on March 12 for the UNCSW gathering. The youth are participating in the session, and they wrote the prayers for the service. Photo: Mary Frances Schjonberg/Episcopal News Service

[Episcopal News Service] The Episcopal and Anglican women attending the 62nd session of the United Nations Commission on the Status of Women have some gospel work to do.

That was Presiding Bishop Michael Curry’s message to a packed Eucharist on March 12 in the Chapel of Christ the Lord at the Episcopal Church Center in New York, a few blocks from the UN. The service, held on the opening day of the session that lasts until March 23, was celebrated in thanksgiving for the gathering of women who have come from all over the world.

The 17 Episcopal delegates, who represent Curry at the gathering, are from places such as Venezuela and Puerto Rico, and from Tennessee to Washington state. They are diverse in age, culture, geography, race and experience. They are gathering with 20 women from 16 Anglican Communion provinces; the Mothers’ Union sent seven women from five provinces. 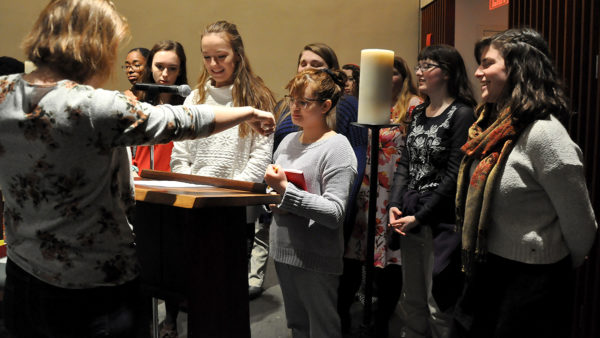 The Rev. Carey Connors does a quick rehearsal of the Prayers of the People with members of the Episcopal Youth in Global Community group of St. George’s Episcopal Church, Fredericksburg, Virginia, before opening Eucharist on March 12 for the 62nd session of the United Nations Commission on the Status of Women. The youth are participating in the session, and they wrote the prayers for the service. Photo: Mary Frances Schjonberg/Episcopal News Service

“You have come here this week in the midst of what is the nightmare of our world,” Curry said during his sermon. “You have come to the seat of the nations of the earth to encourage our leaders and to show them how to end the nightmare and realize the dream for all of us.”

It is “Gospel work” to help reconfigure the nightmare of the world into the dream that God intends for us, he said. It is work that began with Mary, “Jesus’ mama,” the presiding bishop said, “so, follow her footsteps.”

The theme of this meeting centers on the challenges and opportunities in achieving gender equality and the empowerment of rural women and girls. 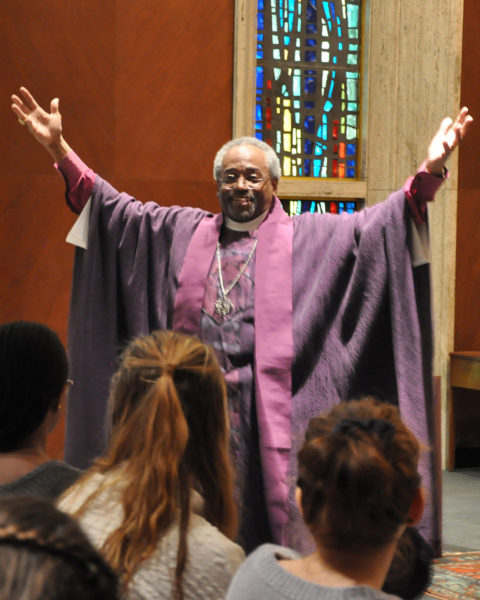 “Go, go do your work, don’t get weary,” Presiding Bishop Michael Curry tells the people gathered March 12 in the Chapel of Christ the Lord at the Episcopal Church Center in New York, a few blocks from the United Nations building, for the opening UNCSW Eucharist. Photo: Mary Frances Schjonberg/Episcopal News Service

Representatives of member states, UN entities, and ECOSOC-accredited nongovernmental organizations from all regions of the world, including the Anglican Communion and the Episcopal Church, are attending. ECOSOC stands for the UN’s Economic and Social Council. Curry submitted a statement to the UNCSW, based on General Convention. Episcopal delegates look to that statement and its priorities in shaping their advocacy as they share their own stories, reflections and concerns that further the cause.

In his statement, the presiding bishop said many rural women and girls are leaders in their communities and that “evolving social norms, expanding human rights and increasing numbers of women working outside the home have enhanced their opportunities.” Their leadership is based on “their knowledge of their land, environment, community and culture,” he wrote. However, they still face “challenges, inequalities and beliefs that impede them from further empowering themselves.”

Curry’s statement called on the UN community and civil society to remedy this situation by doing the following: 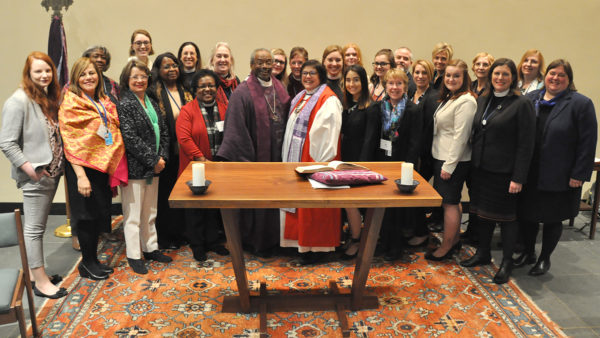 Many other submissions from around the world are here. Many, but not all, of the faith-based organizations’ statements, including Curry’s and that of the Anglican Consultative Council, can be directly accessed here.

All delegates will settle on a final version of “agreed conclusions” (now in draft form here) by the end of the session or soon thereafter. If approved, the UN General Assembly expects member states to bring those priorities home to implement them in the following years. 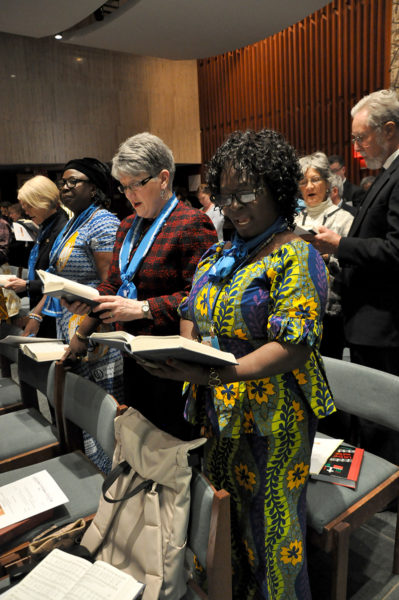 Mothers’ Union member Ekua Swanzy of Ghana, right, Shelia Golden of Canada, Felicia Yeboah Asuamah of Ghana and Mothers’ Union Chief Executive Bev Julien sing “In Christ There Is No East or West” at the opening UNCSW Eucharist on March 12 at the Episcopal Church Center in New York, a few blocks from the UN. Photo: Mary Frances Schjonberg/Episcopal News Service

Bev Julien, chief executive of the Mothers’ Union, said recently that that organization’s attendance at the meeting “is important as we represent the voices of more than 4 million globally.”

“Isolation and loneliness are challenges in both the global north and south, and the issues of women’s economic empowerment are even more acute in rural than urban communities.” The Mothers’ Union delegates “have direct experience of the issues and will be advocating nationally to urge these to be addressed.”

At the end of his rousing sermon, Curry called on the delegations to advocate for God’s dream. “My dear sisters, we believe that God has something better in store for this world,” he said. “It is your job this week to help the leaders of the nations find out what it is and make this world better. So, go, go do your work, don’t get weary.”