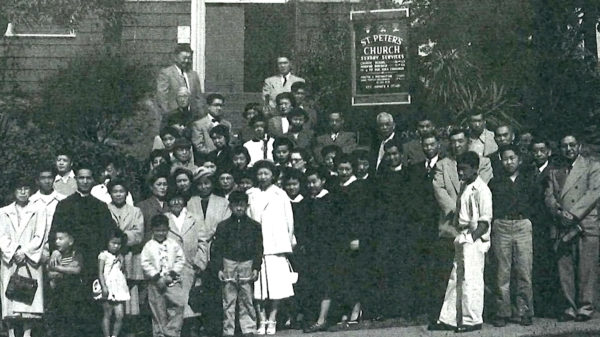 St. Peter’s Episcopal Church in Seattle, founded in 1908 by a group of Japanese Anglicans, was forced to close in 1942 because of the Japanese internment during World War II. Photo: Diocese of Olympia

[Episcopal News Service] The Diocese of Olympia has launched a video series that collects the first-person stories of Episcopalians who were among the Japanese-Americans sent to internment camps during a period of heightened xenophobia and racism at the start of World War II.

The federal policy was enacted by President Franklin Roosevelt by executive order on Feb. 19, 1942, and it uprooted 117,000 people of Japanese descent, about two-thirds of them U.S. citizens. Men, women and children were relocated out of what the government defined as the Pacific military zone along the West Coast to inland “assembly centers” and eventually relocation camps.

The forced exodus from Seattle prompted the temporary closure of St. Peter’s Episcopal Church, a historically Japanese-American congregation that 75 years later helped spearhead the Diocese of Olympia’s video series. The diocese’s videographers recorded hours of footage, interviewing 17 people for the series, “Justice Interrupted.” The result is five 10- to 15-minute videos, the first of which was released Feb. 22. 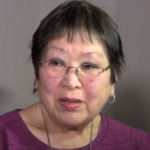 Jan Kumasaka is interviewed in the first video of the “Justice Interrupted” series.

“I was actually 4 years old, riding on the trains, which were dirty,” Jan Kumasaka says, describing in the first video how her family was taken with other Japanese families to one of the camps by railroad. “There was really no water, windows were closed. They were blacked out as we’re traveling to the first camp.”

Her family spent four months in a camp before taking advantage of an opportunity to resettle in Montana. The government would allow release from the internment camps if families were willing to resettle further inland and could find jobs, but the other families spent most of the war at camps scattered around the country, from Idaho to Arkansas.

The Japanese internment camps are a significant part of the history of the Pacific Northwest because of its large Asian-American population, Olympia Bishop Greg Rickel told Episcopal News Service, and the passage of time has not minimized the injustice.

“It’s easy to sweep it under the rug and think that we’ve moved on,” Rickel said, but “we’re living through a time where we’re, I believe, making some of the same errors in judgment of people based on some of our fears.”

He pointed to the Trump administration policies seeking to curtail immigration and refugee resettlement. The Diocese of Olympia joined the American Civil Liberties Union in filing a lawsuit in February 2017 opposing President Donald Trump’s ban on refugees from seven majority Muslim nations.

Such federal policies may not rise to the level of the Japanese internment, Rickel said, “but we’re certainly headed down some of the same roads we went down.” Some of the internment camp survivors expressed such fears in their interviews for “Justice Interrupted.”

During World War II, proponents of internment justified it as a military precaution, guarding against Japanese immigrants and Americans of Japanese descent who might secretly work to support Japan in the Pacific theater of the war. Defenders of internment also argued that it also would protect those detained from racial attacks, though such arguments were undercut by conditions at the internment camps, which resembled prisons more than safe havens.

“As four or five families with their sparse collections of clothing and possessions squeezed into and shared tar-papered barracks, life took on some familiar routines of socializing and school,” the National Archives says in an online article summarizing the Japanese relocation. “However, eating in common facilities and having limited opportunities for work interrupted other social and cultural patterns.”

St. Peter’s Episcopal Church has been highlighting some of that history since last year to mark 75 years since Roosevelt’s executive order.

The congregation was formed in 1908 by a group of Japanese Anglicans, who met in houses until raising enough money to buy property in Seattle in 1932 to build a church. When the congregation’s families were forced to relocate to internment camps, the church closed on April 26, 1942, and didn’t reopen for more than three years.

“St. Peter’s people found their faith in God and their country tested,” the congregation says in an online history. “Nevertheless, along with other Episcopalians in camp, they continued to be the church, worshiping together and persevering until the day when they could return home.”

Other historically Japanese-American congregations have similar stories of upheaval during the war, such as Christ Church Sei Ko Kai in San Francisco and St. Mary’s Episcopal Church in Los Angeles. Two priests from St. Mary’s, the Rev. John Misao Yamazaki and his son, the Rev. John H. M. Yamazaki, followed the majority of their congregation to the camps and continued to lead worship services there.

The Episcopal Church also celebrates the work of the Rev. Hiram Hisanori Kano, who ministered to fellow internees and the guards at four internment camps during the war. He is included in the calendar of commemorations known as “Holy Women, Holy Men” on Oct. 24.

Rickel noted how the Japanese internment’s impact on such congregations also highlights how Episcopalians have been divided too often along ethnic lines.

“We as the church, too, segregated people and still do,” he said. “We don’t come off totally innocent in this.”

The video series, then, is an opportunity to expand the Episcopal Church’s work toward racial reconciliation, Rickel said. St. Peter’s Episcopal Church, a more diverse parish today, is proud of its Japanese-American roots, and Rickel hopes Episcopalians of all backgrounds will learn more about the history of that era through “Justice Interrupted.”

“We regret the actions of our country then and pray regarding similar actions being taken today, praying that we as a people do not make a similar mistake in this generation,” he said in an introductory video for the series.

Future installments are expected to be released throughout the year, about every two months.