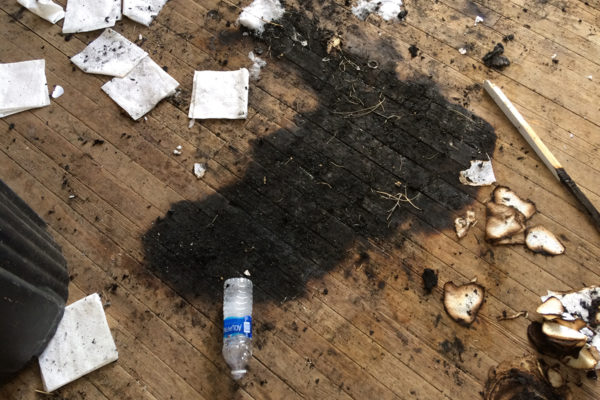 The floor will need to be repaired and reinforced where a fire was set in St. Thomas’ guild hall on the Cheyenne River Reservation in South Dakota. Photo: Margaret Watson

[Episcopal News Service] An Episcopal mission church building in South Dakota was damaged recently by a fire set by stranded youths seeking warmth and shelter from the cold. The congregation, while lamenting the damage to its guild hall, has responded with compassion and forgiveness for those who caused the damage.

“Fortunately, it seems the stranded young folk survived, and so did the church hall,” the Rev. Margaret Watson said in a Facebook post after learning Feb. 9 about the damage to St. Thomas’ Episcopal Church in On the Tree. “We will need a new floor and paint job on the inside – but, considering the other alternatives, this is good news.”

Watson, a priest who serves 11 congregations on and near the Cheyenne River Reservation, told Episcopal News Service the intruders broke into the guild hall and started a fire in the middle of the floor, using hymnals as kindling and burning chairs and a table that had been used as a backup altar. The temperature outside at the time of the break-in was below zero, Watson said.

One of the church members, Ina Blue Coat, was among the first to survey the damage and was quoted by Watson as offering this response: “I pray who did this did find refuge in the building, and found their way to safety. I know that with this cold weather and someone is stranded in the rural areas, survival is crucial.”

Many years ago, the church was usually left unlocked, Blue Coat said, but the congregation began locking the doors to stop thefts from the church.

On the Tree is a sparsely populated area of South Dakota north of Eagle Butte in the north-central part of the state. The church is down a dirt and gravel road, and it sits opposite the meandering Moreau River.

A year ago, the church was used as a staging ground for search parties looking for two young people who were missing and later found dead from the cold, Watson said.

That tragedy might have been repeated this month if the three young people stranded outside hadn’t found the guild hall at St. Thomas’. Watson said she has not learned the identities or ages of those three but heard that they were discovered by a rancher who was driving by the church and stopped at the sight of the fire.

The youths ran out of the guild hall to ask the rancher for help, saying they had been abandoned at the side of the road by a friend, Watson said.

“The road is quite remote,” she said, adding that it “goes from nowhere to nowhere.” 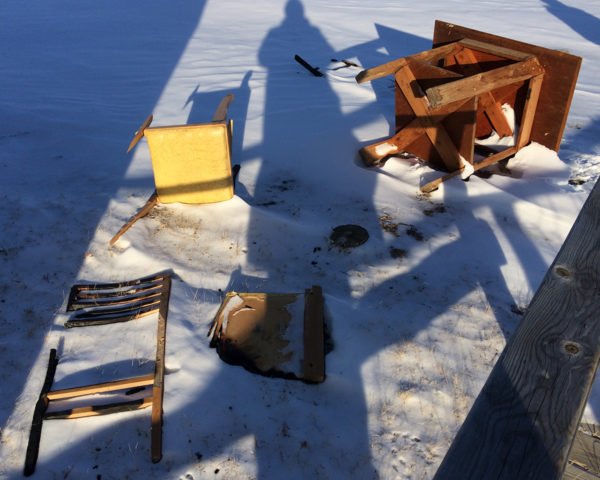 Damaged furniture is seen outside St. Thomas’ Episcopal Church in South Dakota. It was removed from the guild hall after a rancher found three youths burning the furniture for warmth inside the hall. Photo: Margaret Watson

The rancher drove them into town after putting out what remained of the fire. He notified Watson, who emphasized the sense of relief she and the congregation feel.

“We sincerely thank God that they are alive and that they made it out,” she said.

The last service held at St. Thomas’ was on Christmas Eve. Watson and a curate try to offer Eucharist at each mission church at least once a month, though in the winter months, the St. Thomas’ congregation sometimes gathers instead in Eagle Butte at St. John’s Episcopal Church, which has central heat. When services are held at St. Thomas’ in the winter, the congregation of a few dozen typically gathers in the smaller, better-insulated guild hall, warmed by a kerosene heater.

The damage to the guild hall from the fire was “nothing that cannot be repaired,” though Watson doesn’t expect to be able to worship there again until Easter at the earliest.

The congregation also will need to raise money for the repairs, and to buy new hymnals.

“This is a congregation that loves to sing, and all of our hymnals, which are in Lakota, were burned,” Watson said. “That one hits close to the heart.”

The arson comes about a month after a historic bell was discovered stolen from another mission church in South Dakota. That church, St. Paul’s Episcopal Church, is just north of Norris and part of the Rosebud Episcopal Mission.

The Rev. Lauren Stanley, the mission priest serving the congregations on and around the Rosebud Indian Reservation told Episcopal News Service last month that if the thieves bring the bell back, she’ll offer them forgiveness in return – and maybe even take them out for a meal.

Stanley had contacted scrap metal dealers from Rosebud to Rapid City asking them to let her know if someone tries selling the bell, though she doesn’t think it’s worth more than $10 melted down. A promising tip, alerting her to a bell that had turned up 25 miles away, was investigated and revealed not to be the church’s bell but rather one that had been used by a ranch to summon ranch hands.

As of last week, there still was no break in the case.

“I wish I had any news, but nothing yet,” Stanley said.