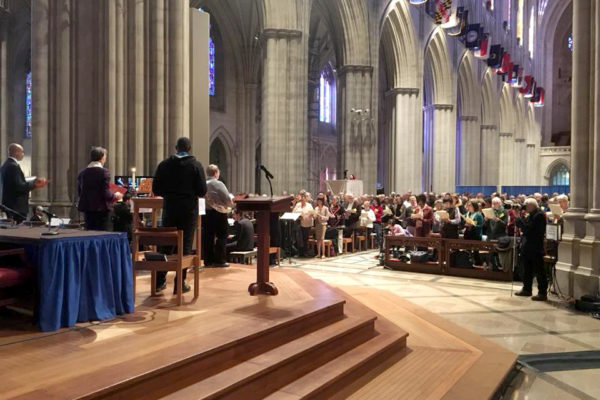 [Episcopal News Service] The Diocese of Washington is calling on the Episcopal Church’s General Convention to consider expanding the use of gender-neutral language for God in the Book of Common Prayer, if and when the prayer book is slated for a revision.

He? She? Those pronouns aren’t preferred, the diocese says in a resolution it passed Jan. 27 at its convention, held at Washington National Cathedral in the nation’s capital city. Instead, the resolution recommends using “expansive language for God from the rich sources of feminine, masculine, and non-binary imagery for God found in Scripture and tradition.”

The diocese’s convention passed two other resolutions, voicing support for immigrants and the transgender community. But it was the call for more inclusive language in the prayer book that drew national attention, especially from conservative-leaning critics.

“What I see is a church that embraces literally any fashionable left-wing cause,” Tucker Carlson, host of “Tucker Carlson Tonight” on Fox News, said in a segment Feb. 5 in which he interviewed the Rev. Alex Dyer, one of the resolution’s sponsors.

The Daily Caller, a news website founded by Carlson, reported on the resolution last week, as did Breitbart and The Blaze. Some of the reaction has been “vitriolic,” Washington Bishop Mariann Budde told Episcopal News Service in describing three negative emails she has received. All three emails were written in a similar tone, she said, describing her diocese alternately as aligned with Satan and at war with God.

The resolution’s push for more gender-inclusive language grew out of conversations in congregations around the diocese where topics of gender and transgender equality have resonated among the parishioners, Budde said. She sees it as a spiritual matter, not a cultural or political issue.

That view was shared by Dyer, priest-in-charge at St. Thomas’ Parish in Washington, D.C. He responded in the TV interview that the diocese had based its decision on prayer and discernment, not politics – and a belief in “a Jesus who calls us to reach out to people on the margins and to reach out to everyone.”

The resolution is worded to influence future revisions of the prayer book, understanding God as a higher being who transcends gender. It doesn’t mandate the elimination of gender-specific references to God, Budde said, despite what some reports suggest.

“I don’t believe that the way we understand gender is applicable when we imagine who created Heaven and Earth,” Budde said. At the same time, the diocese’s emphasis is on expanding the church’s liturgies rather than eliminating masculine descriptions of God, such as God the father.

“I’m all for expanding our understanding of God and how we pray to God, but I feel no need to take anything away,” she said.

The difficulty in describing God may reside in language itself.

“No language can adequately contain the complexity of the divine, and yet it is all we have to try to explain God,” the diocese said in an explanation of the resolution contained in the convention materials. “By expanding our language for God, we will expand our image of God and the nature of God.”

The Episcopal Church is not the only Christian denomination grappling with the inadequacy of language to explain God. The Roman Catholic Church’s Catechism, for example, discusses references to God as “Father” while also noting that the image of motherhood is also appropriate.

“We ought therefore to recall that God transcends the human distinction between the sexes. He is neither man nor woman: he is God,” the Catechism says.

The Evangelical Lutheran Church in America addresses the question of gendered language in a 2013 liturgical resource: “Because language is created and used by humans, it reflects the imperfections and limitations of humanness. Therefore, no use of language can ever totally describe or represent God.”

Under “Language Describing God,” the document cites some examples – “eagle,” “rock,” “light,” among others – before offering a caution about pronoun use: “Assigning male pronouns to human occupations (such as judge, teacher, potter, guard) or to objects (fortress, rock, shield) should be avoided when they are used as metaphors for God.”

More recently, the (Lutheran) Church of Sweden announced last year that it would update its liturgical handbook with “more inclusive” gender language. That move sparked some complaints that the church was eliminating masculine references to God, a reaction similar to what the Diocese of Washington now faces.

“We are not going to give up our tradition,” Church of Sweden Archbishop Antje Jackelén told “PBS NewsHour.” “God is beyond our human categories of gender. … We need help to remind us of that, because due to the restrictions of our brains, we tend to think of God in very human categories. We are not worshiping political correctness. We are worshiping God, the creator of the universe.”

The Episcopal Church, too, has a history of emphasizing inclusiveness.

“This is a conversation that we have been having internally in the Episcopal Church for decades,” the Rev. Emily Wachner, a lecturer in practical theology at General Theological Seminary in New York, told ENS.

Examples of the church’s evolution on gender and power dynamics include the approval of ordination of women in 1976, but it didn’t start or end there, Wachner said. She noted the creation of “Voices Found,” a 2003 supplement to the Hymnal 1982 that featured all women composers.

The Diocese of Washington is following directly in the footsteps of the Diocese of Connecticut, which approved its own resolution on gendered language last year. That resolution called on the General Convention’s Standing Commission on Liturgy and Music “to amend, as far as is practicable, all gendered references to God” in the Book of Common Prayer, “replacing them with gender expansive language.”

“I’ve never had a parishioner leave or join the church for concern about gendered language for God,” Wachner said. “At the same time, this entire conversion around God and gender is so important.” In some ways it parallels the secular conversations now underway on gender issues in society, such as sexual harassment and the #MeToo movement, she said.

Of all the work the church could be doing for gender equity – Wachner mentioned disparity in clergy pay as one example – re-examining descriptions of God in Episcopal liturgies may be just one small step. Wachner is particularly supportive of the first half of the Diocese of Washington resolution, calling for “expansive language.”

She was less impressed by the second half of the resolution, which called on prayer book revisions that, “when possible,” would “avoid the use of gendered pronouns for God.” Limiting language seems counter to the intent of the resolution, she said.

“I believe the real conversation we should be having is around the vitality of the church itself,” Wachner said. “I’m not sure God’s pronouns are a vital part of that conversation.”

The Diocese of Washington also has received attention for its resolution on immigration, which committed it to “becoming a sanctuary diocese” and “offering sacred welcome to immigrants.” Certain congregations in the diocese already have offered sanctuary to immigrants facing deportation, Budde said, and this was a chance for the diocese to show its support for those efforts.

The same was true of the third resolution, “on inclusion of transgendered people.” Budde said the diocese wanted to stand with congregations that have been at the forefront of welcoming transgender people and fighting violence and hatred against them.

The resolution regarding gendered language for God was approved by a hand vote, with a solid majority in favor, though it was not unanimous, Budde said.

“There was very little debate in the convention itself, and I don’t think it’s because they didn’t want to have the conversation,” she said. If Episcopalians didn’t feel comfortable debating the question on the convention floor, she would welcome such conversations in other settings.

She also underscored the imperfection of language and the ways that our understanding of language can change over time. “Mankind” once was an accepted catchall term for men and women. “There wasn’t really much debate about that, until there was a lot of debate about that,” she said, and now it is more common to hear inclusive terms like “humankind.”

Her hope is that someday the church will be so confident in welcoming all people that such debates will no longer be necessary. Episcopalians may each see the world differently, she said, but they share a spiritual common ground, “that we’re part of a family trying to be true to the Gospel imperative to love your neighbor.”