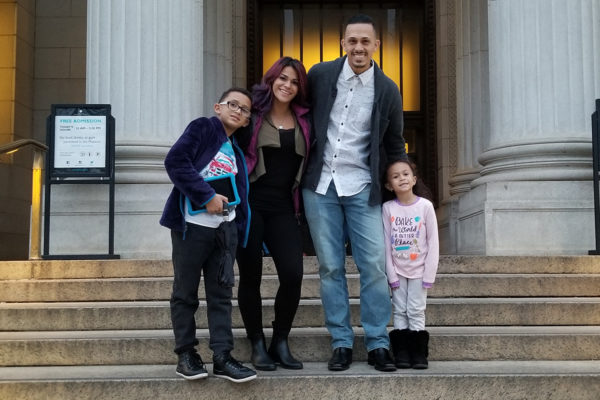 Emmanuel Ortiz-Nazario and Cristalimar Torres-Rodríguez pose with their son and daughter in front of the National Museum of Natural History during their visit to Washington, D.C., so Ortiz-Nazario can attend President Donald Trump’s State of the Union speech. Photo: Jose Rodríguez

[Episcopal News Service] When President Donald Trump addresses Congress at 9 p.m. ET Jan. 30 in the U.S. Capitol, Emmanuel Ortiz-Nazario will be in the chamber listening.

The State of the Union is a president’s chance to frame the political narrative for the coming year, but if the president were to pause and listen to Ortiz-Nazario, he would find that this 30-year-old from Puerto Rico has a compelling story to share.

It began Sept. 20, when Hurricane Maria made landfall in Puerto Rico, laying waste to the island and upending life for the U.S. territory’s 3.4 million residents. Ortiz-Nazario’s story continues in Florida, where he and his family relocated in November, joining the many Puerto Ricans who have fled the devastation at home to seek new opportunities on the mainland.

In Orlando, Ortiz-Nazario’s story intersects with the work of the Episcopal Diocese of Central Florida, which has helped welcome him and other Puerto Ricans by providing them with food, clothes, housing assistance and the spiritual support of an active faith community. It was through the diocese that Ortiz-Nazario was offered this opportunity to visit the nation’s capital and represent fellow Puerto Ricans at the president’s speech.

“It’s a once-in-a-lifetime experience,” Ortiz-Nazario told Episcopal News Service by cellphone from a car. He and his family were on their way to the Capitol to meet Rep. Stephanie Murphy, the Florida Democrat who invited Ortiz-Nazario to be her guest at the State of the Union speech.

His wife, Cristalimar Torres-Rodríguez, 29, and their 10-year-old son and 4-year-old daughter will watch the speech on a TV in Murphy’s office. The family arrived Jan. 27 in Washington, D.C., accompanied by the Rev. José Rodríguez of Jesus of Nazareth Episcopal Church in Orlando, and they have spent the past few days sightseeing, including stops at the National Air and Space Museum and outside the White House.

“It’s been amazing being here with my family,” Ortiz-Nazario said. 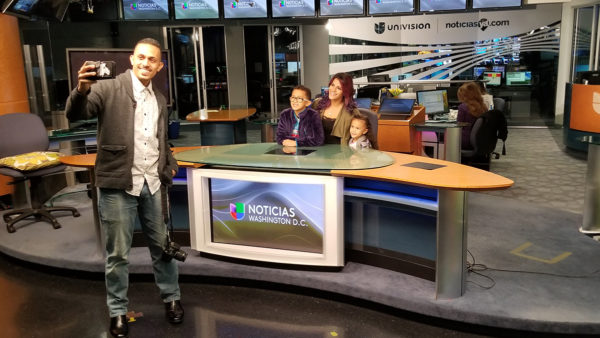 Emmanuel Ortiz-Nazario takes a selfie with his family during a visit to Univision studios in Washington, D.C. Photo: Jose Rodríguez

Murphy reached out to the Diocese of Central Florida earlier this month seeking help in selecting as her guest one of the Puerto Ricans who have migrated to the Orlando area. Rodríguez suggested Ortiz-Nazario.

“They’ve become part of the community,” Rodríguez said. Ortiz-Nazario and Torres-Rodríguez not only benefited from the diocese’s ministry to relocated Puerto Ricans, he said. They have become active volunteers in that effort. “They came to the church for assistance, and then became part of our offering assistance.”

Their story isn’t the only example from Hurricane Maria’s aftermath to be showcased in the lineup of congressional guests for Trump’s speech. San Juan Mayor Carmen Yulín Cruz was invited by Sen. Kirsten Gillibrand, D-New York. Rep. Darren Soto, a Florida Democrat, will bring a Puerto Rican college student who is now studying in Orlando. And Florida Rep. Kathy Castor, also a Democrat, chose a woman who has helped lead a task force providing relief supplies to Puerto Rico. 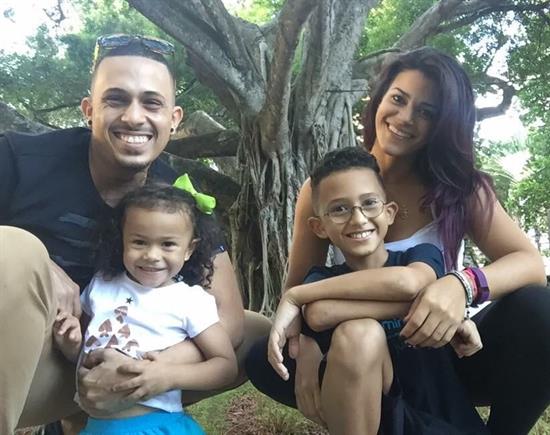 Murphy, in announcing Ortiz-Nazario would be her guest, said she wanted to bring attention to the challenges facing citizens in hurricane-ravaged Puerto Rico and the U.S. Virgin Islands, as well as those who left the islands for central Florida.

“Displaced Americans like Emmanuel and his family have confronted adversity with tremendous courage, and it’s important to listen to their stories and understand their struggles,” Murphy said in a written statement. “In tough times, Americans are there for each other, which is why Congress and the president must act with the urgency this situation demands.”

Hurricane Maria’s profound impact on Puerto Rico is still being felt long after the storm. It initially knocked out power and telephone service across the island, caused mudslides, destroyed homes and businesses, downed trees and was responsible for the death of dozens of people, possibly hundreds. But by the time Episcopal Church Presiding Bishop Michael Curry made a pastoral visit to Puerto Rico on Jan. 2, power had been restored for barely half of the residents, and shortages of food and drinking water persisted.

The Episcopal Diocese of Puerto Rico has been active in relief efforts, partnering with other denominations and with local organizations to address needs not being met by the federal or territorial government. Episcopal Relief & Development has provided logistical support for those efforts, as well as money for supplies there.

The Episcopal Church’s Office of Government Relations, based in Washington, D.C., also has been engaged on the issues of disaster relief and serving populations displaced by disasters.

“The scale of need is simply far too large for churches and nonprofits to address alone,” according to an Office of Government Relations statement released in advance of the State of the Union address.

The statement noted that a bill awaiting Senate approval would provide $81 billion for areas affected by the several 2017 hurricanes to strike the United States, including almost $3 billion aimed at providing education for children of the displaced. The office also issued a policy alert on the issue hours before Trump was scheduled to speak.

“Federal grants, state budgets, and school districts did not plan for hundreds of thousands of Puerto Ricans, including an estimated 10,000 children, to be displaced into Florida schools,” the Office of Government Relations statement said. “The Episcopal Church has a strong commitment to equity in education opportunity and the Office of Government Relations is privileged to evangelize and advocate for our Church’s values to be represented in federal policy.”

Concern for their children was a driving factor in the decision by Ortiz-Nazario and Torres-Rodríguez to leave Bayamon, Puerto Rico, and move to Florida. Schools in Puerto Rico were closed after Hurricane Maria, and crime was on the rise, Ortiz-Nazario said. Their home wasn’t badly damaged, he said, but there was no longer any demand for his airbrush painting services, forcing him to close the business.

“We need to have a better place for my kids,” he said. “Things are going bad back there.”

Estimates vary when tallying how many Puerto Ricans have relocated to the mainland. Florida Gov. Rick Scott’s office has released a series of updates on relief efforts that cite a figure based on the number of people traveling from Puerto Rico to Miami, Orlando and Fort Lauderdale since the hurricane. On Jan. 25, that count stood at 344,000, which would represent 10 percent of Puerto Rico’s pre-hurricane population.

The state’s calculations, however, have been criticized for including all categories of travelers, not just Puerto Ricans displaced by disaster.

University of Florida economists estimate about 50,000 people have moved to Florida from Puerto Rico and, to a lesser extent, from the U.S. Virgin Islands, which also was hit hard by the hurricane. Those numbers are based on requests for state aid and the more than 11,000 school enrollments for displaced children.

Puerto Ricans have been moving to the mainland U.S. in waves for generations, a diaspora that often coincides with the territory’s economic struggles. Census figures show that the largest concentration of Puerto Ricans is found in New York, followed by Florida. Significant but smaller numbers of Puerto Ricans live in New Jersey and Pennsylvania.

Rodríguez, the Orlando priest, was part of an earlier wave of Puerto Rican migration. His family moved to Connecticut in the 1980s when he was 2 years old. He still remembers the red doors of the Episcopal Church in Hartford that helped his family adjust to their new community, and he and his family brought their newfound faith with them when they later moved to Orlando.

“I lived this experience,” he said, and his experiences are informing his work in launching the diocese’s Episcopal Office of Latino Assistance to coordinate assistance to Puerto Ricans who have moved to central Florida.

A primary focus of the ministry at Rodríguez’s church is its food pantry, which has served dozens of new Orlando residents from Puerto Rico. The diocese also has received crisis grants and donations to provide these families with new clothes and shoes and to cover application fees for apartments.

“As soon as the money comes in, it’s effectively spent. The need is so great,” Rodríguez said.

Central Florida Bishop Gregory Brewer has been a prominent supporter of these efforts, even helping to unload a truck filled with relief supplies just after Christmas.

Brewer also met with and blessed Ortiz-Nazario and his family before they left on their trip to Washington, D.C.

“They haven’t called this attention on themselves,” Rodríguez said. “They’ve come here trying to do what’s best for their family.” In the process, they have been welcomed into the family of Episcopalians in Orlando.

Ortiz-Nazario called it an honor to be able to attend the president’s speech. He knows it’s unlikely he will get to tell his story directly to Trump, but if he could, he would emphasize the need for unity over partisanship when addressing the needs of Americans affected by disasters like the one his family lived through.

“When people work together, people do better,” he said.