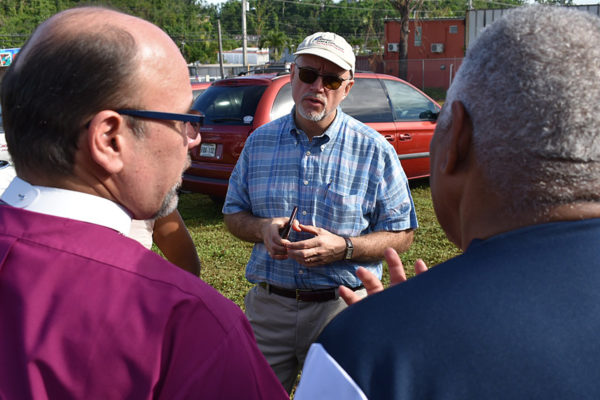 [Episcopal News Service] How can Episcopalians help their communities respond to natural and even human-caused disasters?

What counts as preparedness can take many forms, but it begins in discernment.

Radtke, in an interview with Episcopal News Service about what his organization has learned over the years, pointed out that the Episcopal Church is not the Red Cross; it has a different mission. The specifics of the mission need to be locally discerned long before a disaster makes headlines. “What is our ministry going to be when the tornado strikes, when the earthquake comes, when the fires come?” he asked. “What are our assets? That’s a very local question.”

Those questions might include the following: Does your church have a kitchen? Does it have experience feeding people? Can people shelter in the building? Are you known for your parish nursing program? Does your church have a relationship with vulnerable members of the community such as immigrant populations, homebound elderly or people in recovery?

“I used to think that what is traditionally thought of as ‘disaster preparedness’ was most important – things like formal written plans – and now I realize that the focus should be on building resilient systems, which includes some of those preparedness activities and so much more,” Katie Mears, senior director of Episcopal Relief & Development’s U.S. Disaster Program, told ENS.

Some traditional disaster planning needs to happen but, Mears said, Episcopal Relief & Development is also encouraging dioceses and congregations to think more broadly before disaster strikes, for instance: What is their posture in their communities? How well connected are they to the vulnerable – and to each other? 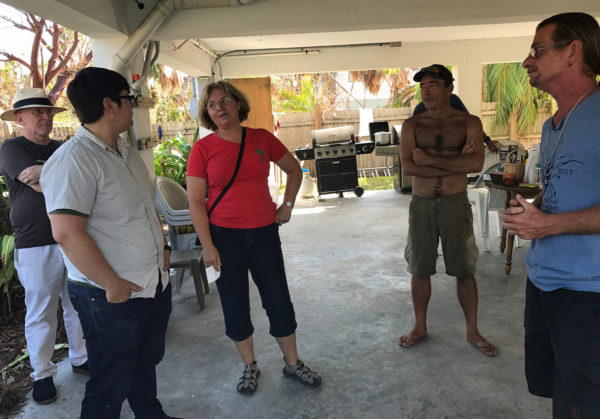 It involves clergy and lay leaders having “what-if” conversations on a regular basis to start thinking about how they would respond. Often during those conversations, obvious gaps pop up, such the need to set up a text thread that includes all the vestry members, rather than having to do it in a midst of a crisis.

The other lesson, Radtke said, that Episcopal Relief & Development has learned over the years is “communicate, communicate, communicate,” especially with church leaders. When disasters cause power outages and disrupt telecommunications, often the ability to text returns before more widespread communications does, he said. The organization offers AlertMedia, a cloud-based disaster communications tool that sends and receives messages to large groups of people via SMS, email and voice calls, to dioceses in 2016 as a pilot project. The roots of Episcopal Relief & Development’s use of it date to conversations between the U.S. Disaster Program team members and diocesan disaster coordinators in California about post-disaster assessments when voice calls might not work. After these conversations, a disaster coordinator in the Diocese of El Camino Real found and tested the platform in his diocese in 2015.

In early 2016, Episcopal Relief & Development started a pilot project for its staff and diocesan partners in San Diego and Louisiana. The system was particularly effective after major flooding in Louisiana that year. As a result, others dioceses became interested, so the pilot has scaled up to nine dioceses.

One particularly important piece of information that AlertMedia has conveyed over and over is details about when diocesan clergy and lay leaders are having conference calls with their bishop to discuss disaster needs and responses. AlertMedia’s success has taught Mears a lesson about how a mix of high-tech and low-tech “is more realistic to our church culture.” The automated polling-type texts that AlertMedia sends are great, but it also “really matters to have that phone call with your bishop; it’s really great to know that at a particular time every day [after a disaster] you’ll be able to meet up with your clergy colleagues and your bishop,” she said.

Mears cautioned that not all dioceses need the bells and whistles of AlertMedia, but it can be helpful after large-scale or major events, or when emergencies impact a significant number of churches in a diocese. There are also other communication platforms to accomplish the main goals of checking in with leaders, having regular conversations pre- and post-disaster and making sure that updated information is shared with everyone. “Our team is eager to speak with diocesan leaders around the U.S. church about their emergency communications needs,” continued Mears.

Episcopal Relief & Development has done its part in sharing information. As Hurricane Harvey was barreling toward Texas last September, church leaders were sheltering in place, but most still had internet access. Mears said she and her colleagues realized that they could do some rapid web-based training.

More than 70 leaders from the dioceses of Texas and West Texas participated in the webinar sessions that Episcopal Relief & Development offered in the first few days of the storm. The sessions covered what she called “disaster basics,” such as things to do immediately. The webinars were also a source of connection among the clergy and between them and Episcopal Relief & Development.

In the past, the organization focused on equipping diocesan-appointed disaster leadership, but “the beauty of online platforms is it makes it easier to expand people’s ability to connect directly with some of those training opportunities,” Mears said.

A historic change in approach

The work that Episcopal Relief & Development staff members did before, during and after the multiple disasters of 2017 has its roots in a catastrophe more than a decade ago. Hurricane Katrina, which devastated New Orleans and a swath of the Gulf Coast in August 2005, was a high-water mark in the organization’s approach to disaster relief. Radtke, who began as the organization’s president just six weeks before Katrina struck, said the pre-Katrina response was to send grants to disaster-hit dioceses and other Episcopal institutions after the fact.

“It was well meant, but it was not strategic,” he said.

Radtke said that his experience of Katrina and its aftermath taught him that the Episcopal Church was not clear about how to respond to the storm. Baptists had mobile kitchens; the Mennonites are known for their willingness to rebuild homes. “We spent a lot of time trying to figure out what was the Episcopal Church’s response going to be,” he said, rather than doing that same sort of work before the storm hit.

Even being behind the eight ball in terms of ministry discernment and dealing with diocese that suffered big infrastructure losses, the church “did very well” serving its New Orleans and Gulf Coast neighbors, Radtke said.

“The lesson I learned after Katrina is that we had huge potential as a church in the lives of people,” he said. “And, we’re seeing that play out across all of the impacted regions.” For example, Episcopal Relief & Development helped the Diocese of Puerto Rico get organized after Hurricane Irma’s glancing blow for the predicted direct hit from Hurricane Maria.

The help that Puerto Rico needed was both typical and unique. Episcopal Relief & Development worked with the diocese, in what is now a typical discernment process, “to identify the key strengths and assets of the diocese, and we (tried) to leverage those to develop ministries that will support, in this instance, hurricane response,” Radtke said during a recent visit to the island. The Diocese of Puerto Rico has very strong health-care ministries, so he said it seemed natural that diocese would make that work a major part of its long-term recovery effort.

Disaster relief in Puerto Rico was different than for a mainland U.S. diocese, Radtke pointed out. As an island, it was logistically more complicated to get aid there. “The hurricane hits on mainland United States, you put things on trucks and you drive it. That obviously wasn’t going to be an option in this case,” he said. “So that created particular challenges at the front end.”

That was also true in the Virgin Islands. “The logistics here are a challenge because you’re dealing with five islands and two countries,” Radtke said during the presiding bishop’s pastoral visit to the islands. 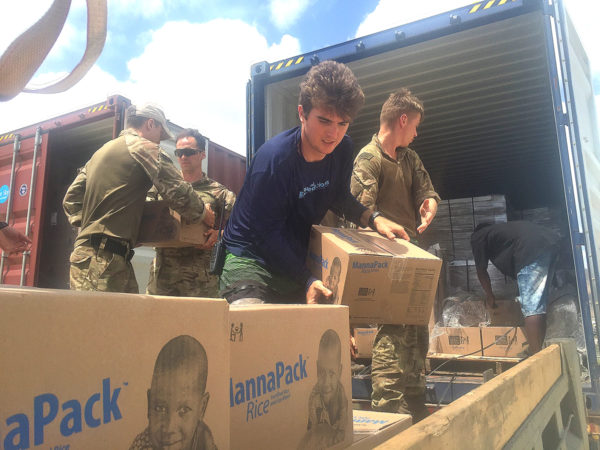 Episcopal Relief & Development partnered with the Episcopal Diocese of the Virgin Islands and Convoy of Hope, a faith-based humanitarian organization based in Missouri, to provide emergency supplies to the British Virgin Islands following the devastating impact of hurricanes Irma and Maria. The supplies included food, two portable kitchens, two refrigeration containers, 350,000 gallons of drinking water, 9,900 gallons of gasoline and diesel fuel, tarps, plywood and nails, as well as hygiene and infant care kits. Photo: Convoy of Hope

The status of Puerto Rico and the U.S. Virgin Islands as territories and not states “created bureaucratic complexity, particularly in terms of coordinating with federal agencies” that is rarely the case in U.S. states, he said.

Discernment of assets and gifts is ongoing

Radtke and Mears insist that each person or community can be a channel for God’s work in the world. How that work manifests itself will be different in different places and among different people. “Every congregation has different resources and assets, and disasters happen locally,” Radtke said.

Mears has visited Episcopalians in many of the impacted dioceses, and in many places she saw a change in approach to the church’s posture in their communities. “There is so much outreach and impressive ministry happening around the church, beyond the church’s usual suspects,” she said. “We’ve heard of really impressive disaster-related ministry from all these impacted dioceses. There are so much more amazing ministries with incredibly vulnerable communities than you would think.”

Congregations all over the church are “making an amazing amount of difference for a relatively small footprint,” she added.

“There are churches in all these places where these disasters have happened where the church very much understands it is not just an organ-playing club,” she said. “They understand that their ministry and role in the community does not only happen between 10 and noon on Sunday mornings.”

“In some places that is a very intentional, strategic objective of the diocese,” Mears said, and in other places “it’s just the way that the church is moving.”

And yet, if there is what Radtke would call a “unifying charism” across the church, it is Episcopalians’ desire to provide pastoral support for disaster survivors and care for the caregivers.

“I think the Episcopal Church cares deeply about people in all of their dimensions. We want to clothe them, we want to feed them, we want to take care of their immediate medical needs,” he said. “But, we’re also interested in their human spiritual life.”

That care happens regardless of religious affiliation, or lack thereof, and is “a huge need that isn’t being met that we have some unique capacities to meet,” he added.

For example, after Harvey, the Diocese of Texas was looking for more trained pastoral care volunteers. Leaders used Episcopal Relief & Development’s Asset Map to find congregations that listed pastoral care as one of their assets.

“If we’re able to have this living, grassroots-populated map with the information about the kinds of community ministries that all of our churches and other institutions are up to, that becomes enormously helpful in terms of both leveraging those gifts and telling the story of how those gifts are being leveraged.”