[Episcopal News Service] The bishops of the two Episcopal dioceses in South Carolina have joined four of their counterparts from other Christian churches in signing a letter to the state’s General Assembly urging lawmakers to join with the educators, advocates and the faith community in working to improve public education.

“Inequity in education delivery in our state cannot be remedied by the Legislature alone,” the bishops say in their letter, released this week. “The Courts cannot correct this injustice alone. Only together can we make a difference for the children of South Carolina.” 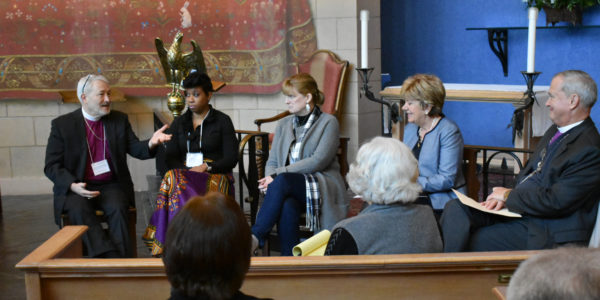 Bishop Andrew Waldo of the Diocese of Upper South Carolina and Bishop Skip Adams of the Episcopal Church in South Carolina have been working on the issue of education equity with other Christian churches in the state since 2014, when they formed the Bishops’ Public Education Initiative. The initiative aims to encourage church-school partnerships while providing a collective voice to speak out for public policy changes to benefit all children, regardless of race or economic status.

Waldo and Adams were joined in signing the recent letter to the General Assembly by bishops from the state’s Lutheran, Roman Catholic, United Methodist and Christian Methodist Episcopal churches.

The letter references the bishops’ initial 2014 “Statement on Public Education” and it comes two months after the South Carolina Supreme Court said it was up to lawmakers, not the courts, to set education funding levels, despite evidence that the state had failed to ensure students in 30 or more poor school districts were receiving “minimally adequate education.”

The court’s November ruling essentially reversed its own 2014 ruling that ordered the General Assembly to develop a plan for fulfilling the state’s obligation to all its students.

The bishops’ new statement on the issue comes a week after the Episcopal Church helped convene a conference in South Carolina on education equity through the All Our Children network. The conference, held Jan. 16-18 at Trinity Episcopal Cathedral in Columbia, drew more than 100 educators, advocates and church leaders from multiple denominations. Some of them cited the court decision as a call to action, as did the bishops in their letter this week.

“In light of the recent Supreme Court decision to end oversight of progress made, especially in rural schools, we renew our call to people of faith to join us in support of flourishing education for all children,” the bishops’ letter reads. “It is now time for us to act where progress is on hold or stalled.”

The bishops reaffirmed their commitment to South Carolina’s children, including through tutoring and mentoring programs, and they pledged to support efforts to bring more qualified teachers to the state’s classrooms, including through better pay. The letter also emphasizes the need to address the “uneven” availability of technology from district to district.

“We commend those who work across district lines to collaborate and consolidate resources,” the letter concludes. “We stand ready to encourage these efforts in any way possible. We know this work will require all of us. We are here to work with you. We are calling on you to give this issue your greatest attention. We invite you to call on us.”