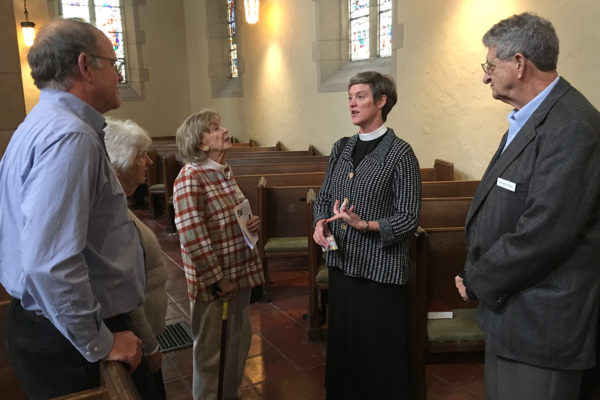 The Rev. Aimee Eyer-Delevett, second from right, rector of All Saints-by-the-Sea Episcopal Church in Montecito, California, chats with parishioners Jan. 14 at Trinity Episcopal Church in Santa Barbara, where members of both congregations worshiped while All Saints was under an evacuation order due to the recent mudslides. Photo: Sheri Benninghoven

[Episcopal News Service] The Rev. Aimee Eyer-Delevett and her congregation got the word Jan. 24 that they could return to their church for the first time in two weeks, but they have no expectations of an immediate return to normal life or business as usual at All Saints-by-the-Sea Episcopal Church in Montecito, California.

Fire and flood have changed everything for this community sandwiched between mountain and ocean on the east side of Santa Barbara.

All Saints and its neighbors have suffered weeks of disaster, from the massive wildfire that threatened in December to the Jan. 9 mudslides that have killed at least 21, with two people still missing. The church and its parish school have been closed since authorities ordered a mandatory evacuation from the neighborhoods in the path of the mudslides. The church wasn’t damaged, but the sprawling debris field left Highway 101 impassable and split the congregation in two, with parishioners on the Santa Barbara side isolated from those in the region to the east and south.

“It’s been a very difficult time,” Eyer-Delevett told Episcopal News Service by cellphone. “The community has suffered a collective trauma, the entire community of Montecito.”

Her uprooted congregation has found solace in faith and fellowship. Until they can worship in their own church again, All Saints parishioners are attending services at Episcopal churches in Santa Barbara and Ventura and at home churches outside the evacuation zone. After Highway 101 reopened Jan. 21, all are invited to a “Service of Healing and Hope” on Jan. 26 at Trinity Episcopal Church in Santa Barbara.

Great news: #Hwy101 is now OPEN thru #Montecito @SBCounty! Thanks to our crews & contractors who made it happen. Off-ramps in area remain closed so watch for truck traffic & use extra caution. Safe travels, everyone. pic.twitter.com/thC429v6kM

All Saints clergy and lay leaders, meanwhile, are focused on providing pastoral care to their now scattered members, including to the newest member – a baby boy, born last week to Montecito residents who have been staying with a fellow parishioner in Santa Barbara. Such generosity has been replicated in countless ways across the region since early December, when the Thomas Fire began threatening.

The wildfire grew to become the largest in California’s history, and though Montecito and the Santa Barbara area were largely spared by the fire, the smoke and ash still upended daily life for weeks.

It also forced All Saints to cancel Sunday services on Dec. 10 and 17. Trinity Episcopal Church in downtown Santa Barbara invited the All Saints congregation to join Trinity for worship on Dec. 17, but then Trinity had to cancel its service, too, when the downtown church became part of the evacuation zone.

All Saints leaders were able to return to their church Dec. 19, just in time to prepare a full complement of Christmas Eve and Christmas services. They turned their focus to clearing ash from church grounds, including facilities used by the Friendship Center, an elder-care day center that operates on All Saints grounds.

Then, heavy rain began to fall.

The wildfire had created conditions in the higher elevations that were ripe for disaster, and the deluge early Jan. 9 turned those fears into reality. The water cascaded down the hillside, picking up mud and debris and smashing through anything in its path. Homes were damaged or destroyed. Cars were washed away. Some residents were trapped until emergency crews reached them. Others failed to make it out alive.

Most of the damage was centered on Montecito, an unincorporated community of about 9,000 people. Power and phone service was lost. Water from taps was ruled unfit for drinking without boiling. All Saints closed its parish school but opened the church grounds for use as a medical triage site. The church also was used by the California National Guard as an evacuation gathering point. By the end of the day Jan. 11, the church grounds were mostly deserted.

A day later, on Jan. 12, the Thomas Fire finally was declared 100 percent contained.

Communicating with the congregation was difficult, but Kathleen Bright, the parish’s director of administration, worked with parishioner Sheri Benninghoven to begin compiling a list of parishioners who were confirmed safe. Benninghoven posted updates on social media and sent emails to the congregation asking people to add to the list of names. The emails also sought to identify families in need, as well as families able to provide help. Another parishioner checked parish and school directories against a website that showing damaged or destroyed homes.

From those information sources, All Saints produced an Excel spreadsheet that church leaders used to match needs with offers of help, such as temporary housing, meals and clothes.

Those in need included a couple from the parish who were days from the birth of their second child and suddenly homeless. Another parishioner in Santa Barbara had some extra space where the couple and their school-age daughter could stay. Friends from the parish and school community also provided a crib and other baby supplies, so when the boy was born Jan. 16 at the hospital in Santa Barbara, a comfortable home awaited him.

“It’s been astounding to see the way the community has come together around this,” Eyer-Delevett said. “They were able to benefit from the generosity and hospitality of the parish and the parish school. … It’s been humbling and encouraging to see the way that people who have not experienced this trauma directly, but indirectly, have been able to pour out such assistance.”

No one from All Saints, either parish members or school families, was killed in the mudslides, though many parishioners know people who died or who lost everything in the disaster. Some also have harrowing stories to tell about surviving the overnight floods.

“There won’t be ‘going back to normal’ after this,” said the Rev. Melissa McCarthy, the Diocese of Los Angeles canon to the ordinary. “The emotional trauma of being asleep in your bed and hearing a big bang and all of a sudden being swept away by mud pouring through your bedroom, that’s the stuff of nightmares.” 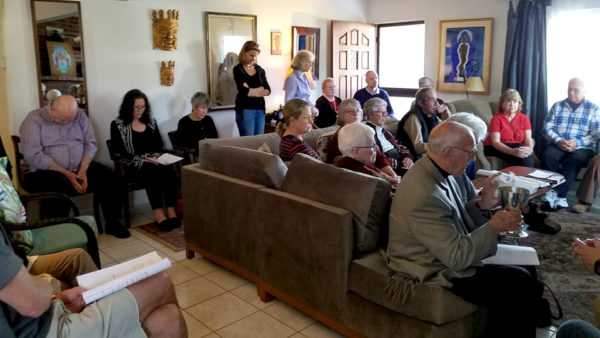 Members of All Saints gather to worship Jan. 14 in a house church in Carpinteria after their church was evacuated in the aftermath of mudslides in Montecito. Photo: Diana Andonian

Members of the congregation who live east and south of Montecito or fled south down Highway 101 have worshiped at St. Paul’s Episcopal Church in Ventura or at services held in a house in Carpinteria. The majority, though, either lives west and north of the mudslides or fled that direction when the evacuation was ordered. Those parishioners were invited to worship at Trinity in Santa Barbara.

“What we’ve done is basically welcome them into our services and let them use our building for any meetings and programs during the week,” Hall, the priest at Trinity, said. “They’ve got a lot of work do, and we want to support them any way we can.”

Days run together, Eyer-Delevett said, while she keeps most of her focus on providing pastoral care to those in need. She and her wife are staying in Santa Barbara, and when she attends worship at Trinity, she sits in the pews with the other parishioners, leaving it to the Trinity team to lead the service.

“It’s been wonderful to be welcomed with such gracious hospitality,” she said. 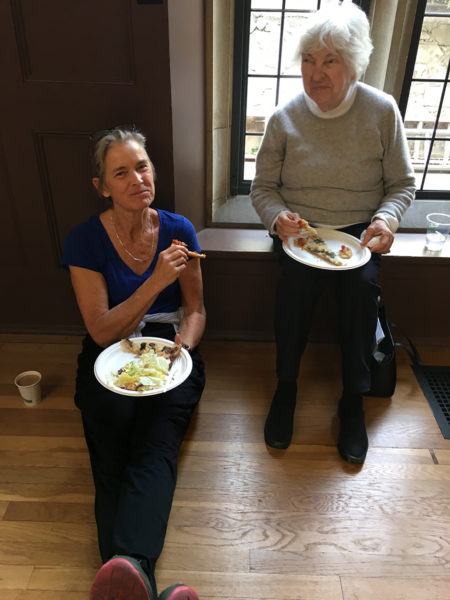 On Jan. 14, after the first joint worship service, the Trinity congregation ordered 46 pizzas – “pizza is the universal comfort food,” Hall explained – and served 300 people in the parish hall, a blending of All Saints parishioners and their host congregation. The conversation lasted hours as some people lingered there well into the afternoon.

“Every moment that we get to spend together is cherished,” Eyer-Delevett said.

As for the parish school, it was offered a temporary location by St. Mark United Methodist Church, which operates a preschool in Santa Barbara. All Saints’ classes resumed Jan. 22 in makeshift classrooms set up in St. Mark meeting rooms. School administrators were able to return to All Saints, escorted by emergency personnel, to retrieve items necessary to teach in the new location. Eyer-Delevett isn’t sure when the parish school will return to its permanent location because the water there still isn’t safe to drink.

The diocese, meanwhile, has helped raise $40,000 from parishioners’ donations and grants from Episcopal Relief & Development to support those across the region affected by the fires and mudslides, McCarthy said. Diocesan leaders also have checked in with Eyer-Delevett and other priests and deacons in the affected area to see if they need anything, and sometimes just to talk.

McCarthy will be joined by Los Angeles Bishops John Taylor and Diane Jardine Bruce, suffragan, and others from the diocese at the evening worship service Jan. 26 in Santa Barbara, “to be a witness to what they’ve experienced.” The diocese also has scheduled a gathering for clergy and lay leaders in late February, described as day of reflection and healing in the aftermath of the disasters.

With authorities beginning to allow repopulation of the neighborhood around All Saints this week, Eyer-Delevett hopes to be ready to resume Sunday services in the church on Feb. 4. The church is still decorated for Christmas, with poinsettia petals and Christmas tree needles “mingled with the mud on the rugs of the sanctuary floor.”

“Time has stood still in many ways, and yet life goes on around us,” she said.

Plenty of work remains, from cleaning up the facilities to catching up on business that has been delayed by disaster: vestry nominations, financial documentation, budget approvals, all in addition to serving a community still reeling from the events of the past several weeks.

“The landscape has been redrawn and we’re going to have to figure out how we recover as a community, not only as a community of faith, but the whole village of Montecito,” she said. “But this tragedy has already strengthened the bonds within our community, and we will find our way together, one step, one breath, one act of human kindness at a time.”