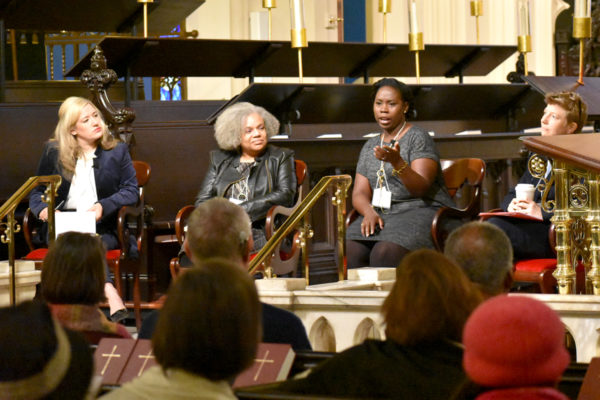 Kenita Williams, director of the Racial Equity Leadership Network at the Southern Education Foundation, speaks Jan. 17 at a panel discussion as part of the All Our Children conference held at Trinity Episcopal Cathedral in Columbia, South Carolina. Photo: David Paulsen/Episcopal News Service

[Episcopal News Service – Columbia, South Carolina] Bishops, priests, deacons and lay leaders at the forefront of the Episcopal Church’s advocacy for equity in education joined this week with educators and advocates from several other Christian denominations for a three-day conference in South Carolina’s capital.

The Jan. 16 to 18 gathering was hosted by All Our Children, an ecumenical network of church-school partnerships with roots in the Episcopal Church. More than 100 people attended the conference’s wide range of workshops and presentations at Trinity Episcopal Cathedral – across the street from the South Carolina statehouse grounds, where Confederate war generals and fallen Confederate soldiers are still honored prominently with stately monuments.

The Civil War’s legacy of segregation, discrimination and racial injustice was an underlying thread through much of the conference, as several speakers detailed how educational disparity is interwoven with economic and racial disparity – both across the United States and dramatically across South Carolina, from the rural communities along the Interstate 95 corridor to the poor neighborhoods of Columbia, the state’s second-largest city. 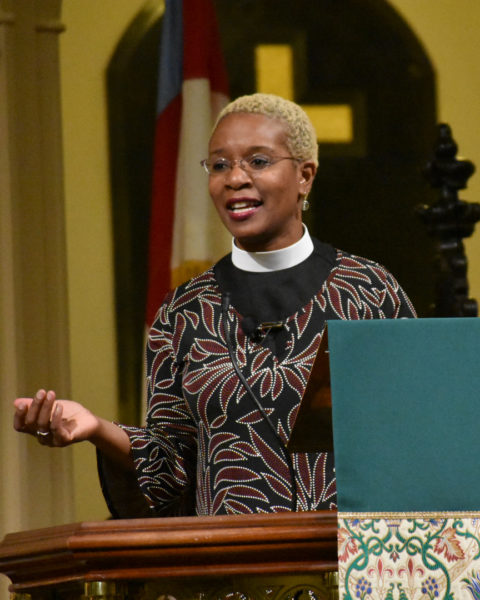 The Rev. Stephanie Spellers, canon to the presiding bishop for evangelism, reconciliation and stewardship of creation, delivers the keynote speech Jan. 17 at the All Our Children conference. Photo: David Paulsen/Episcopal News Service

And although conference attendees were disappointed to learn early on that Presiding Bishop Michael Curry had been forced to cancel his keynote address due to illness, the Rev. Stephanie Spellers, Curry’s canon for evangelism, reconciliation and stewardship of creation, delivered a rallying speech in his place.

“God is working out a new salvation story for this whole nation, and it starts with our children, all our children. It starts with you,” Spellers said Jan. 17 to the crowd gathered that evening in the cathedral.

All Our Children’s executive director is Lallie Lloyd, a lay leader in the Episcopal Church who founded the organization in 2012 to build bridges between churches and under-resourced schools. She and others at the conference emphasized how Christians can bring a moral and spiritual authority to the debate on education equity.

Lloyd, in her welcoming remarks Jan. 16, called education equity a “common good” – “that core American principle that we hold some things in common because we all benefit from them. And we all benefit when our neighbors’ children are well educated.”

South Carolina was chosen to host the conference, All Our Children’s first, partly because of the stark contrast in how “our neighbors’ children” are educated around the state. One of the five lawsuits that were combined into the desegregation case Brown v. Board of Education was filed in South Carolina, but many schools in South Carolina, as in other parts of the United States, are said to be just as segregated today as they were before the case’s landmark 1954 Supreme Court ruling.

Diocese of Upper South Carolina Bishop Andrew Waldo, in his welcoming remarks, cited the 2005 documentary “Corridor of Shame” for raising awareness of the alarming reality of education in the poor, majority-black school districts along the I-95 corridor of South Carolina. Thirty of those school districts were plaintiffs in a lawsuit filed in 1993 arguing that chronic underfunding by the state had left the schools, staff and students in conditions resembling third-world countries.

The state Supreme Court ruled in 2014 that students in those districts were not receiving even a minimally adequate education, and it ordered the South Carolina Legislature to develop an improvement plan. But after two new justices were elected to the five-member bench, the South Carolina Supreme Court reversed itself, saying in November 2017 that it was up to the Legislature, not the courts, how to set funding levels for education. 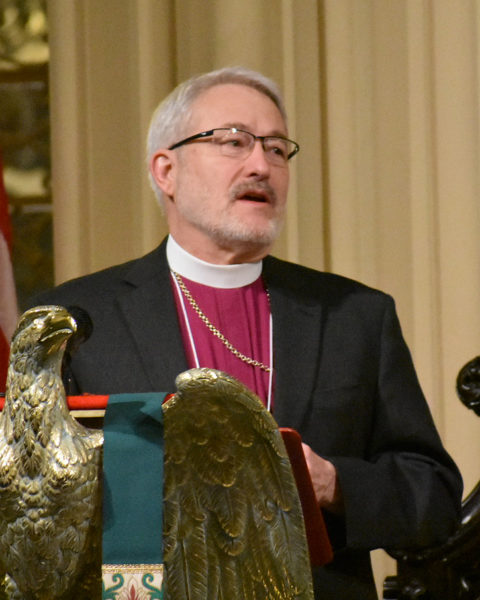 “Our work has been to engage our congregations and raising up ways of being connected with our local schools,” Waldo said.

Church-school partnerships, such as tutoring and mentoring programs, form the core of All Our Children’s efforts, through the work of volunteers like Betty Hudgens, a member of Trinity Episcopal Cathedral who has served as a tutor for four years through the initiative’s Reading Matters program for children through third grade.

“We commit to one hour a week, which isn’t whole lot,” Hudgens told Episcopal News Service, but sometimes just having a conversation with the children she tutors seems to make a difference. “I walk away from there humbled.”

Lloyd’s goals for the conference included building relationships between church leaders and educators, turning the spotlight on the issue of education equity, highlighting ways churches already are making a difference and providing resources for advocates and volunteers to help the movement grow.

Some of the workshops and presentations were intended to quantify the problem by mining data on educational disparities and surveying the latest research on the best teaching practices. The conference’s first keynote speaker, Jeff Duncan-Andrade, set the tone for much of what was to follow. 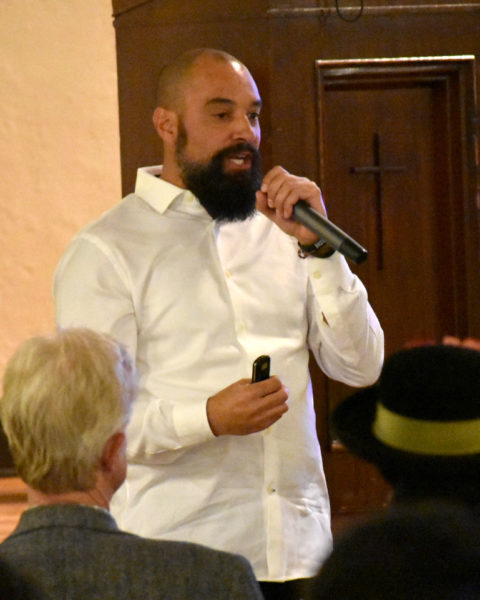 “The school is the single biggest influential factor in child development. It’s not the family. It’s not the media,” said Duncan-Andrade, an education professor at San Francisco State University. “They spend more time in school than anywhere else, between 5 and 18. If we get that right, in one generation we can transform communities.”

But many statistics show we are not getting it right. High school graduation rates remain low for low-income students, who struggle to learn while suffering from the stress and trauma of poverty, Duncan-Andrade said. At the same time, the gap between wealthy and poor Americans is growing. He also cited the United States’ high incarceration rate and its low ranking on the Global Peace Index, which compares countries based on an analysis of crime, wars, diplomatic relations and other factors.

Duncan-Andrade also underscored the difference between equality and equity. Spending equally on affluent and low-income school districts is not equitable if the needs are exponentially greater in those poor districts, he said.

The message that perhaps resonated most among those attending the conference was the importance of building positive relationships with students. All successful teachers are ethnographers, he said, meaning they get to know their students and develop trust before classroom learning can blossom.

Other events at the conference were intended to confront racial bias and systemic racism. And several presenters provided advice on how effectively to advocate for changes in government policy that will move society closer to education equity.

Much of the rest of the schedule was devoted to discussing examples of existing church-school partnerships and how congregations can learn from those examples and start their own partnerships. Such partnerships have been endorsed by the Episcopal Church’s General Convention as “a path for following Jesus into the neighborhood, addressing educational inequity, and rejuvenating congregations.” Its 2015 resolution on the topic also backed the All Our Children network.

A participant in one of the workshops Jan. 17 described how her church Greenville, South Carolina, reached out to a nonprofit called Greenville Literacy Association asking how church members could get involved. That led to volunteer opportunities teaching English as a second language classes.

Leave your preconceived notions of what’s needed at the door, said another workshop participant, a priest from North Carolina.

One of the churches she served reached out to the local school, thinking volunteers might be needed for tutoring. Instead, school officials said a teacher’s lounge hadn’t been painted in years. The church volunteers grabbed some paint brushes.

And while a majority of the conference attendees were white and described themselves in an early conference activity as being on the “have more than enough” end of the economic spectrum, the Episcopal Church’s emphasis on racial reconciliation was echoed in many of the discussions.

Racial justice needs to be part of the conversation because it is inseparable from the issue of education equity, said Kenita Williams, director of the Racial Equity Leadership Network at the Southern Education Foundation. She and other speakers noted that the victims of the broken education system are disproportionately children of color.

“We just have to have these tough conversations, and we are clear up front you might be uncomfortable,” Williams said during one of the Jan. 17 panel discussions. At the same time, the goal is not to assign blame or dwell on the negatives, but rather to serve the children. “Keep it asset-based rather than deficit-based.”

Hudgens, the Reading Matters tutor, does her part every Thursday morning at Columbia’s Hyatt Park Elementary School, where she reads with two third-grade girls, a half-hour each.

Her first job after graduating from college in 1962 was as a high school teacher in Columbia, where the schools were just starting to be integrated. She later worked in public relations and then as executive assistant to the dean of the cathedral. Now in retirement, Hudgens still feels passionate about public education as one of her “soapbox” issues.

So, when she was asked to be a reading tutor, “it was a chance to put my money where my mouth was.”

The reading sometimes takes a backseat to conversation, she said, as some of the students she tutors are eager to talk. Others are not so open.

One second-grade boy never seemed to enjoy the reading sessions, Hudgens said, and she could never figure out why. Late in the school year, she asked him what he liked, and he said basketball. She confided that she, too, was a basketball fan, and they began talking about the NBA star Stephen Curry.

“I said, how would you like to read something about basketball? He said, ‘Well, maybe.’”

The school library didn’t have any books about Curry, so Hudgens went out and bought one to take to her next session with the boy. They read it together.

The tutors are advised not to give any gifts to the students, so Hudgens instead donated the book to the school library. Now it is available to be checked out by the boy, or by any other student who might be interested in reading it.