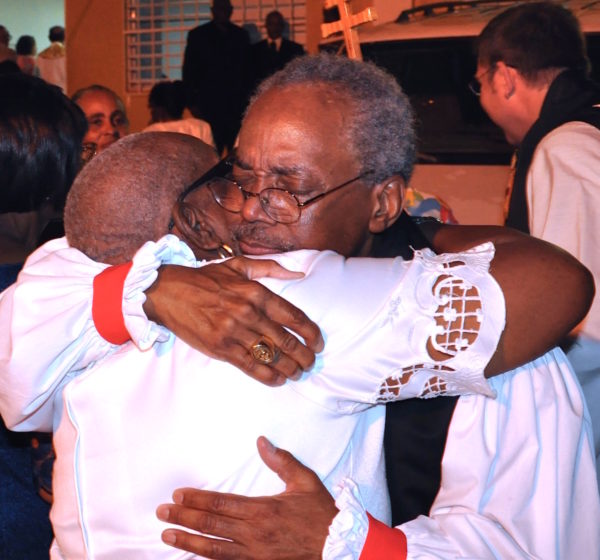 Presiding Bishop Michael Curry hugs and greets Episcopalians after leading a packed Eucharist service Jan. 11 at All Saints Cathedral on St. Thomas, U.S. Virgin Islands. The service and following reception were part of his pastoral visit to provide encouragement to those affected by hurricanes Irma and Maria in September. The church is committed to helping throughout the long-term recovery process, Curry said. Photo: Amy Sowder/Episcopal News Service

“I was watching. I was hoping. I was praying,” said Sebastian, a parishioner from All Saints Cathedral, as he pointed to his house on a distant hillside. “I was stressed. I lost everything in a few minutes.”

About four months later, Sebastian has a new roof, and he’s driving Presiding Bishop Michael Curry and his contingent around his island during a Jan. 10-12 pastoral visit to the Diocese of the Virgin Islands. Curry listened to Episcopalians share their post-hurricane struggles and stress. He discussed how the church can bolster spirits and communities.

Since the horrendous 2017 Atlantic hurricane season, stories like Sebastian’s are many among the Diocese of the Virgin Islands. Curry strove to encourage parishioners.

“If you follow Jesus, you are not alone,” Curry told a packed house at All Saints Cathedral. “The truth is, it’s easy to forget that because life has a way of overwhelming you.” 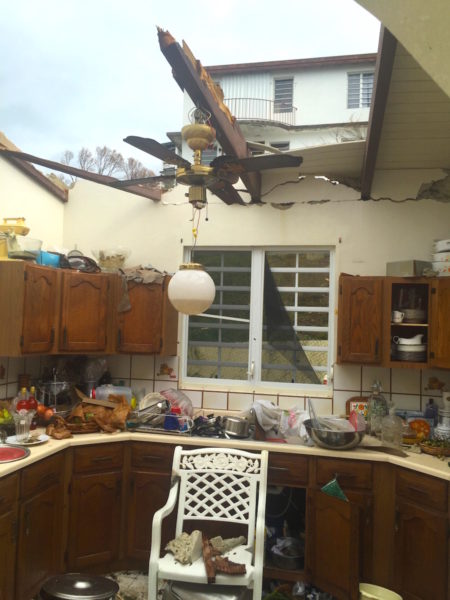 George Sebastian, member of All Saints Cathedral on St. Thomas of the U.S. Virgin Islands, lost the roof of his home and much of what was inside. Photo courtesy of George Sebastian

Besides the logistical problems caused by the physical distance between the islands and the U.S. mainland, there’s the stress of emotional disconnection. Many islanders say they feel far away from the thoughts of mainlanders and the benefits they enjoy. The seemingly endless onslaught of natural and human-made disasters can cause people to suffer from compassion fatigue too.

“When you leave, don’t forget us,” urged Derek Gabriel, an All Saints Cathedral parishioner.

The long-term effects on the Virgin Islands

On Sept. 6, Hurricane Irma hit the Virgin Islands, and on Sept. 20, Maria gave the islands a second beating, both as Category 5 tropical cyclones. Irma pummeled St. Thomas and St. John the most. Then Maria targeted St. Croix, the largest of all the Virgin Islands.

Four months later, cruise ships have returned, but some buildings still sit faceless with no walls and exposed beams, and corrugated metal roofs remain rolled up, evidence of the storms’ ferocious winds. Much of the Virgin Islands remains in disrepair with blue tarps coloring the landscape, although 90 percent of power has been restored.

All Saints Cathedral men’s club president George Sebastian’s house on St. Thomas is now repaired, and he and his wife are able to live there again. Photo courtesy of George Sebastian

The Episcopal Diocese of the Virgin Islands consists of 14 congregations across five islands, some governed by the United States, some by Great Britain. The U.S. islands with Episcopal churches include St. Croix, St. Thomas and St. John. The British islands have Anglican churches on Virgin Gorda and Tortola.

As the only full-time person on staff, diocesan Bishop Ambrose Gumbs leads four services in three locations every Sunday. When Curry asked how he was doing, Gumbs replied, “Surviving. Sometimes you wish you could go away and when you come back, it’s like it was before.”

Several older people have died since the hurricane, Gumbs said. “A lot of people are stressed. A lot of them don’t have insurance. There’s still chaos, and labor costs are through the roof.”

Curry and his contingent met with U.S. Virgin Islands Lt. Gov. Osbert Potter, who said it will take a long time to recover.

“Our next fight is to get power lines underground,” Potter said.

The exodus of more than 4,000 people has caused all sorts of problems. Police officers and teachers are gone. Hotel employees have also left or are unemployed, as many hotels might not reopen until summer, Potter said. The U.S. territories lost four schools, so families either have moved to the mainland or have sent their kids to live with mainland family members.

“If we did not know about Episcopal Relief & Development before, we certainly do now,” said Rosalie Simmonds Ballentine, diocesan chancellor and lay representative to the Anglican Consultative Council.

“They really stepped up to the plate and helped us,” said Simmonds Ballentine, who also serves on the organization’s board of directors.

Workers from Episcopal Relief & Development have inspected all the diocesan churches and other properties on all five islands, said Jay Rollins, the organization’s disaster relief consultant who lives in St. Croix.

The organization assessed what volunteer teams can do immediately, in the mid-term and then long-term, Rollins said. He helped create a diocesan disaster response committee that includes a representative from each island, plus a youth representative.

“We’re looking at not only recovery, but disaster preparedness. Not just for hurricanes,” Rollins said.

“I think in times of trouble, everyone comes together,” Radtke said.

Churches of the Virgin Islands

Donnalie Cabey bounced and squealed with delight as she stood at the back of the nave of St. Andrew’s Episcopal Church on St. Thomas. “We just got power this afternoon. The presiding bishop brought the power,” said Cabey, wife of the Rev. Lenroy K. Cabey, rector.

The water was about 2½ feet high inside the church, so the carpet had to be pulled out, and there was no electricity for four months. The first few weeks after Hurricane Irma, Episcopalians met in the dark in the parish hall, using flashlights. Then, a generator powered services.

On Jan. 10, representatives from the diocese’s three deaneries reported on the state of their buildings and membership.

Episcopalians described Tortola as a bomb site after Irma. At St. Mary’s in Virgin Gorda, besides the roof damage, pavilion destruction and rectory flooding, the bell tower fell directly onto graves, cracking headstones.

St. Croix residents cleared out stores to help St. Thomas after Hurricane Irma, but then Maria came and hit St. Croix barely two weeks later when its supplies were depleted.

At St. Andrew’s, membership dropped from more than 300 to about 50, said Hilarie Baker, senior warden. Twenty-five members had homes billed as total losses.

“Many relocated because of illness, job loss or their kids’ school closed. We’re hopeful many members will return,” Baker said. 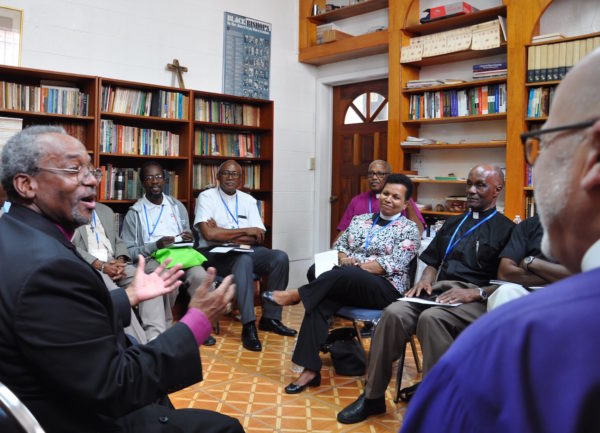 Presiding Bishop Michael Curry offers encouragement and spiritual direction while also listening to the grief, pain and hopes of clergy from across the Diocese of the Virgin Islands at a meeting Jan. 11 at the diocesan office on St. Thomas. Photo: Amy Sowder/Episcopal News Service

The next morning on Jan. 11, clergy from across the islands met at the diocesan office to share their pain, concerns and hopes with Curry.

“There may be no more difficult calling, in good times and in bad,” Curry told about 15 clergy members. “This is going to be long-term work, not quick fixes, and we’re committed to doing that.”

School enrollment is down all over the islands. Public school children are doubled up at the school buildings not destroyed, some attending morning session while others attend in the afternoon. 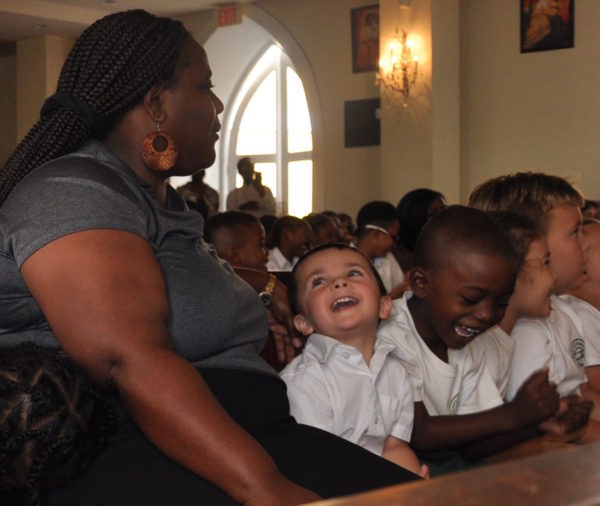 All Saints Cathedral School children ages 3 to 18 enjoyed a message by Presiding Bishop Michael Curry on Jan. 12. He told light-hearted anecdotes to remind the students that they have God’s strength with them at all times. Photo: Amy Sowder/Episcopal News Service

Although classes have been in progress full-time since Oct. 2, excluding holiday breaks, there’s been a lot of damage at St. George’s Secondary School, which is part of St. George’s Anglican Church on Tortola, a British island, said principal Antoinette Rock. Enrollment dropped from 111 to 72 students after the hurricanes. That means less tuition money to pay teacher salaries and expenses.

“We did come together to clear the debris and have the trees removed, and without funding,” Rock said. “But I’ve reached a point where I’m becoming very frustrated. We had two hurricanes in September, and here it is January, and there have been no repairs to the school.”

At all Saints Cathedral School on St. Thomas, enrollment for students ages 3 to 18 dropped from 240 to 214 students after Irma, said school board chairwoman Lynette Petty-Amey.

Classes were going ahead at full-speed, however. Krishiv Amarnani, 10, stepped away from his class to share that half of his family’s Sugar Mill condominium roof blew off.

“A lot of my sports equipment is gone, but I did salvage my soccer and spelling bee trophies,” Amarnani said.

“We stay positive for the kids, because it’s so easy to stay depressed. A lot of stores have closed. People lost jobs, there’s not a fully working hospital, there are damaged post offices. It takes three weeks to get mail.”

These Virgin Islanders urge the rest of the world to remember them as they rebuild their lives.

The Rev. Sandra Walters Malone, vicar of St. Paul’s Mission on Tortola, has a severely damaged home and congregation members who are homeless, some living in cars and receiving food weekly.

“After the immediacy of disaster, people go on with their lives, and they forget that we’re still in chaos,” Malone said. “Sometimes it helps just to know others are thinking of you.”