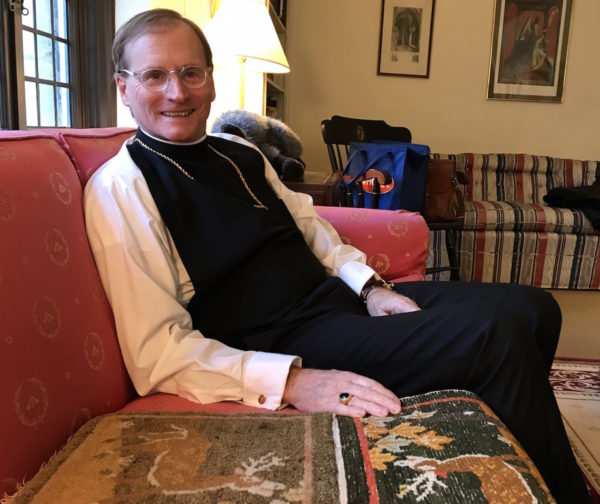 Bishop Dorsey McConnell of the Episcopal Diocese of Pittsburgh visited China in early December to give back a blanket, which Chairman Mao had given his father, to Chinese World War II historians and to build relationships with religious leaders in China. Photo: Diocese of Pittsburgh

[Episcopal News Service] It looks like a tiny, old blanket with deer on it. Nothing to warrant a pause or second glance.

Yet that small Mongolian saddle blanket, draped across a chair in Diocese of Pittsburgh Bishop Dorsey McConnell’s childhood home for decades, has crossed oceans multiple times, first from the hands of one of the world’s most famous political figures.

In September 1945, Chinese Communist Party Chairman Mao Zedong had to fly from his base in Yunnan province to a tense conference with General Chiang Kai-shek of the Nationalist Party in Chongqing. This was about a month after Imperial Japan announced its surrender, one of the major actions to end World War II. For a moment, the United States was an ally of China’s against Japan.

The Allied Forces, which included China, the United States and Great Britain, are honored by this memorial featuring 2,000 military helmets at the World War II Museum in Tengchong, China. Photo:Niu Shuai of the China Institutes of Contemporary International Relations

McConnell’s father, U.S. Gen. John Paul McConnell, was the pilot assigned to fly Mao to and from the conference — safely. Mao was visibly nervous that he’d never come back. The Nationalists, who had been hunting Mao for years, considered him a rebel and criminal. Mao hugged his wife at the airport, a public sign of affection not deemed appropriate in that culture at that time, McConnell explained.

The elder McConnell returned Mao safe and sound to Yunnan province after a disastrous conference that failed to produce any good solutions. To show his appreciation to his pilot, the chairman gave McConnell the deer blanket. It’s been in the McConnell family home ever since.

More than 70 years later, when religious officials and those from the World War II Museum in Tengchong and Martyrs Cemetery invited him to visit as they honored his father, McConnell knew he had to bring a gift.

He saw the blanket and decided that returning it to the Chinese people would be an appropriate and meaningful gift. McConnell’s Dec. 6-8 visit was an act of personal friendship and goodwill, despite all these years of deep division in political, philosophical, cultural and theological beliefs and practices between the two countries.

McConnell could tell the fact that he journeyed to meet these Chinese dignitaries and present them with this gift meant the world to them.

“I don’t think I’ve been more graciously received in any place in the world. It was breathtaking and very moving, for personal reasons as well as the promise it holds,” McConnell told ENS. “Personal-relationship building does something that states and diplomats can’t do. We had no political agenda. We were simply there to give back to them something precious that they had given us.” 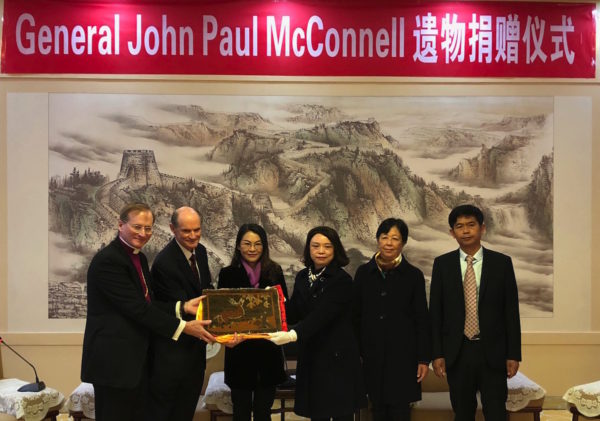 Bishop Dorsey McConnell ceremoniously returns to officials at the World War II Museum in Tengchong, China, the blanket that Chairman Mao gave his father in 1945. Photo courtesy of Niu Shuai of the China Institutes of Contemporary International Relations

There were elaborate dinners with much clinking of glasses, and each glass that made contact with McConnell’s was lower than his, in honor of and in deference to him, as is customary. Officials gave him a tour of the new museum, which has an impressive collection of about 80,000 artifacts.

Three walls are covered with 2,000 helmets from fallen Allied troops.

Museum officials held the blanket with a curator’s care, using protective gloves. That blanket was precious to McConnell, but he recognized that it’s easy for stories to get lost in time. 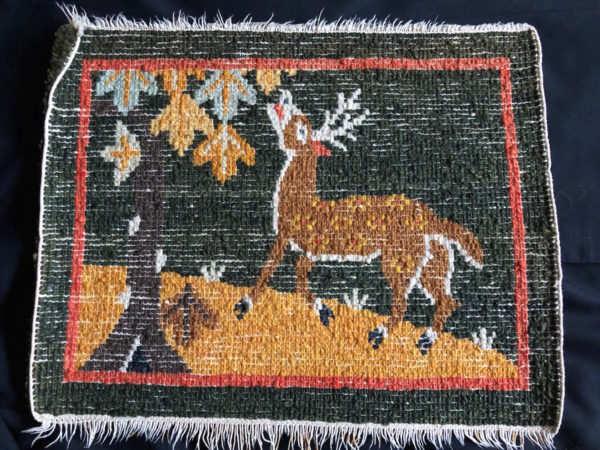 Communist Party Chairman Mao gave this saddle blanket to U.S. General John Paul McConnell in 1945, as a token of appreciation for safely piloting him to and from a U.S.-organized conference with the Nationalists in China. Photo: Dorsey McConnell

“I didn’t want to see something with this much symbolic value to lose its place in history and end up in a garage sale held by one of my great-grandkids and sold for 5 bucks,” he said with a laugh. “Given to the museum, it will be taken care of and preserved.”

On the last day of his visit, McConnell visited the Three-Self Patriotic Movement headquarters, the Chinese government department that oversees all officially sanctioned religious activity, giving licenses to churches to function openly and vetting them to ensure they don’t undermine the goals of socialism. “Three-self” refers to the requirement that religious organizations be self-governing, self-supporting and self-propagating.

He met with the Rev. Melissa Lin, the deputy head of the China Christian Council, and her assistant Meiying Shi.

The council is the umbrella organization for all the recognized Protestant churches in China. Lin is also dean of the seminary in Nanjing, the country’s largest of 23 established seminaries. She earned a master of divinity from Church Divinity School of the Pacific, the Episcopal seminary in Berkeley, California.

McConnell toured the church next door, the former Holy Trinity Anglican Cathedral, neglected for years but now restored. The cathedral has stained-glass windows in the apse donated by the Episcopal Church. The renovation has won a UNESCO world heritage award, and the council hopes to plant a worshiping congregation here next year, he said. 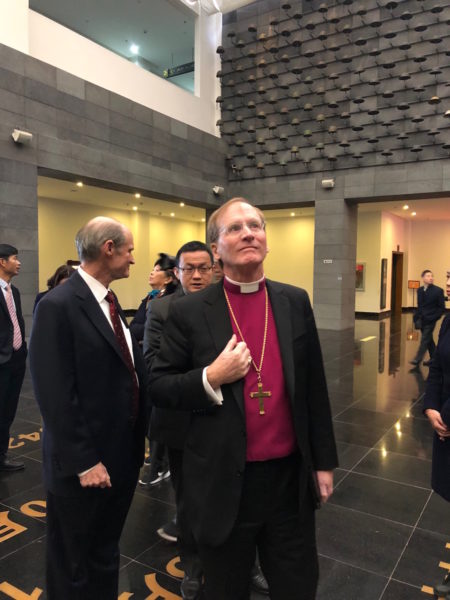 Nurturing relationships is a way to spread the gospel in a respectful manner, McConnell and Ng said. The “official” estimate is that there are 40 million Christians in China, and that number is growing, as churches have gained a bit more leeway in recent years, as long as they follow the rules. In a country of 1.4 billion people, the number of Protestant Christians in China has grown an average of 10 percent annually since 1979. Bible printing presses can’t keep up with demand, McConnell and Ng said.

McConnell also saw his visit as an act of reconciliation by an Episcopal bishop. And reconciliation happens best on a personal level, McConnell said. Chinese culture places more emphasis on building friendships without immediately diving into business than American culture does, Ng and McConnell said, so taking the time for this visit meant a lot.

“It really struck me how deeply they took that in. You don’t have to use church talk; as a matter of fact, it’s a disadvantage. People know healing when they feel it. They know reconciliation when they see it and feel it. They could sense the authenticity of this moment,” McConnell said. “It’s sort of like St. Francis says: Preach the gospel at all times and, when necessary, use words.”