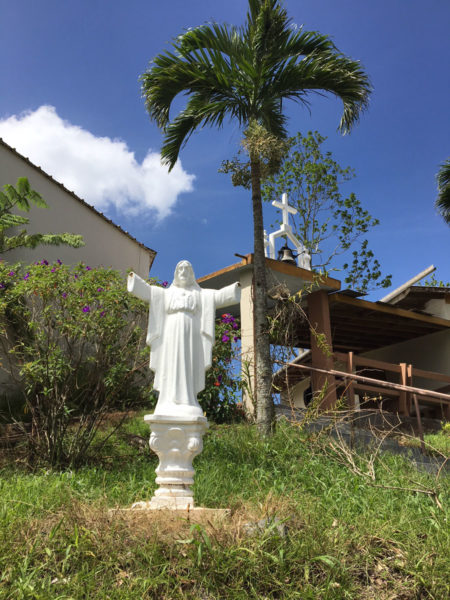 This hurricane-damaged statue of our Lord at Misión la Santa Cruz in Puerto Rico inspires Episcopalians there and in the Diocese of Maryland in their ministry to help the island recover. Photo: Eugene Sutton

Churches and individuals in and outside the Diocese of Maryland responded to the call to raise money for its “Rebuild Puerto Rico” fund. More than $20,000 for immediate emergency needs was raised the month after Hurricane Maria’s knockout punch. So far, a total of $47,000 has been given.

Maryland Bishop Eugene Taylor Sutton and the Rev. Margarita Santana, canon for Latino ministry for the Diocese of Maryland, presented the first of these funds last October to the Puerto Rico Bishop Rafael Morales when they visited the island territory.

The Diocese of Puerto Rico now operates two centers for emergency relief and supplies, one at the Diocesan Center near San Juan and the other at St. Luke’s Episcopal Hospital in Ponce. During a post-hurricane visit by Morales to an especially devastated rural community, a parishioner declared, “Somos una diócesis de la esperanz” (We are a diocese of hope). This became the rallying call for the people of the diocese – a mantra of resurrection faith, prayer and spirit-inspired action.

Sutton sent the Rev. James Snodgrass to the diocesan convention in Puerto Rico last month, where he read a letter from Sutton. For Snodgrass, it was a return trip to the diocese in which he’s still canonically resident. He and his wife, Patty Parsley, spent 5½ years as missioners in the rural, mountainous region of Aibonito. They founded a retreat center and new mission congregation before moving to Baltimore in 2012.

Sutton asked Snodgrass to assess the damage done seven weeks earlier. Damage was extensive to vegetation, landscape and buildings – huge trees uprooted, wooden structures demolished. When the sun set, some places had electrical service, often provided by generators; many places were surrounded by darkness, some lit by a candle or abandoned. Snodgrass recalled the words of John’s Gospel: “The light shines in the darkness, and the darkness did not overcome it.”

On an island with a high density of automobiles and 9 percent of the population living in urban areas, driving without traffic signals, especially at night, was harrowing. In some places, foliage had reappeared, debris had been collected along the roadsides, and businesses had reopened. In other places, especially among the very poor, destruction lingered. People were worn down.

During the 110th Asamblea Diocesana (diocesan convention), Morales, newly consecrated in July, delivered a hope-filled address to the delegates. He thanked all who’ve responded to emergency needs, encouraging all to pitch in and reach out, and he outlined his vision and priorities for the diocese for the foreseeable future. He proclaimed a new Christian year, which began with Advent, as “El Año de Discipulado” (the Year of Discipleship). And he concluded, “Nuestra iglesia es dinámica, misionera y evangelizadora” (Our church is dynamic, mission-oriented and evangelizing).

It was said that this diocesan convention was one of the most upbeat, well-organized and harmonious in recent memory.

After the convention, Morales told Snodgrass his top priority is to complete the retreat center, Centro Espíritu Santo, in Aibonito. It would serve the clergy and people of Puerto Rico, as well as those from the United States and beyond. The project would entail building a church and overnight facilities. Morales and Sutton have discussed this project, and how, as companion dioceses working together and with God’s help, it can happen.

Morales enthusiastically agreed to a proposed parish-based mission work project in Aibonito, sponsored by St. John’s Church, Havre de Grace, Maryland, and led by Snodgrass, who is priest-in-charge there. The group will stay in a church-owned house, pray daily and cook their own meals, repair damaged houses in the surrounding neighborhood and plant new trees. The group expects to go in early March.

The experiences of this initial group will help the Diocese of Maryland advise other church groups interested in going to the island to help in the physical and spiritual restoration and rebuilding effort. The Rev. Rafael Zorrilla, canon to the ordinary, oversees all groups coming to Puerto Rico. He told Snodgrass that he’s overwhelmed by requests from church groups around the U.S. wanting to come and help. He asked the Diocese of Maryland to develop a screening process and recommend which groups should come. Those groups would then be partnered with a church in Puerto Rico, and together they would work out travel and work project arrangements. He stressed that groups coming to Puerto Rico need someone who speaks Spanish.

– The Rev. Dan Webster is canon for evangelism and media in the Diocese of Maryland.