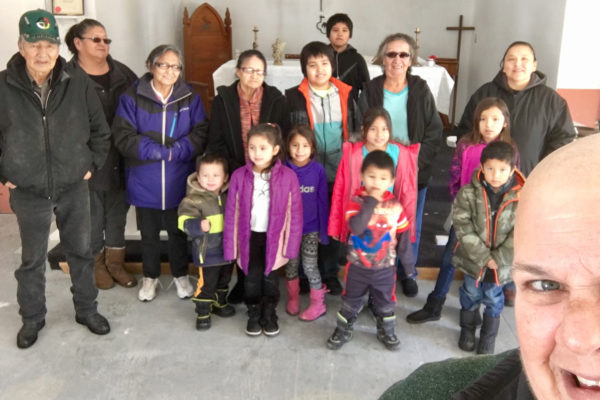 The Rev. Lauren Stanley takes a selfie with members of the congregation at St. Thomas’ Episcopal Church in Corn Creek, South Dakota, during the church’s Christmas festivities in 2016. Photo: Lauren Stanley

[Episcopal News Service] If your parish priest looks a little ragged after surviving this long weekend’s marathon of Advent and Christmas services, mention the Rev. Lauren Stanley. On Dec. 24, she will preside at seven services in seven different churches over 14 hours, and at those services, she potentially will officiate at dozens of baptisms while putting 210 more miles on her Toyota RAV4.

All in a day’s work for a mission priest in South Dakota.

“This is when I earn the big bucks for being a mission priest,” Stanley told Episcopal News Service by phone this week – those “big bucks” being just one of the punchlines in her spirited account of Christmas Eve. Holidays at the Rosebud Episcopal Mission are exhausting but rewarding, she said.

“This is a marathon, but I look at it as a joyful marathon. … I’m in the privileged position of being able to proclaim God’s love to people who may not get to hear it the rest of the year.”

Would she ever consider scheduling a marathon Christmas Eve like the one awaiting Stanley?

“Absolutely not,” she said by phone, seemingly with a shudder. “Honestly, by the time you finish three services, I’m totally wiped out.” But if anyone has the personality and endurance to pull it off, she said, it’s Stanley.

Congregations across the Episcopal Church have found this year particularly challenging in scheduling services, with Christmas Eve falling on the Fourth Sunday of Advent, and some are gearing up for a packed worship schedule to accommodate the surge in attendance that is typical around Christmas.

Attendance is expected to surge, too, at the Rosebud Episcopal Mission’s 12 tiny congregations, located on and around the Rosebud Indian Reservation in South Dakota on the Nebraska border. But that is where the similarities end with larger congregations.

On an average Sunday, Stanley and Henninger may see as few as five people in the pews of some of the churches they serve. Organists are hard to find, so the priests typically lead the hymns in the Lakota language unaccompanied by music. Only three of the congregations worship every Sunday, while the others are part of Stanley’s and Henninger’s monthly rotation.

When Christmas and Easter roll around, scheduling services at South Dakota’s far-flung mission churches takes a bit of planning. The Pine Ridge Episcopal Mission in the southwest corner of the state has scheduled five services over two days. In the center of the state, Episcopalians living on or near the Cheyenne River Reservation will attend services at seven churches on Dec. 24, divided between two priests.

The Rev. Kim Fonder, who serves Episcopalians on the South Dakota side of the Standing Rock Sioux Reservation scheduled himself for six services on Dec. 24, from 9 a.m. in Mobridge to 9 p.m. in Little Eagle.

“You hope your voice holds up,” he said in describing his Christmas Eve worship “relay.” His wife, Tammy Fonder, will join him on the journey, which he expects will cover more than 130 miles. He also will preside at a service at a nursing home on Dec. 23 and a residence on Dec. 25.

“You have to be dedicated to your congregations,” he said. “They’re your’ families. You don’t just have your immediate families, you have all your church families.”

This year, Stanley decided the only way to give each congregation of Rosebud West a Christmas Eve service was to sacrifice the separate service for the Fourth Sunday of Advent, though she will incorporate some of those themes into her sermon.

This will be the fifth Christmas she has celebrated on the reservation since taking the job of mission priest in February 2013. “The first year I did it, it was quite a shock to the system,” she said.

“We’re hoping this all works out perfectly,” Stanley said. 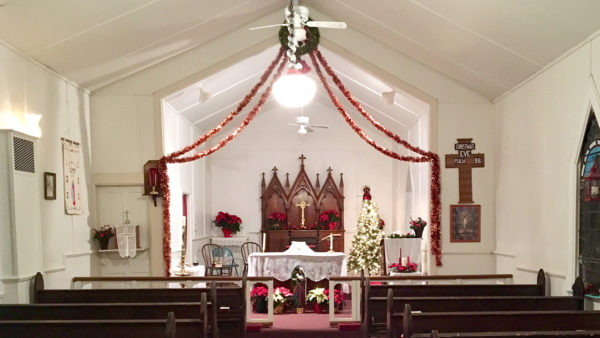 Church of Jesus in Rosebud, South Dakota, is seen decorated for Christmas in 2016. Photo: Lauren Stanley

Her schedule unofficially begins Saturday, when she will drop her dog off at the kennel. Christmas Eve leaves no time to tend to a priest’s best friend.

Then at 9:30 a.m. Dec. 24, she will leave her home in Mission, South Dakota, and head northwest to Corn Creek for the first service, at St. Thomas’ Episcopal Church. Her driving route is precisely plotted to ensure that if she has an emergency she will be only a two-mile walk from a farmhouse to get help.

She’s not expecting an emergency – the RAV4 has snow tires, after all – but she has a winter survival kit just in case. There’s not snow in the forecast for Christmas Eve, just clouds with a high of 28 and a stiff wind blowing from the west-northwest.

For music, she’ll have Handel’s “Messiah” playing on repeat. For her feet, a rotation of boots and shoes. For food, Tanka Bars, which are buffalo jerky and cranberries. She’ll also mix up a couple of protein shakes to get her through the day.

Her most important cargo will be the four bags of priestly gear, containing everything from vestments and bulletins to the bread and wine. Before leaving home, she also will fill up three Thermos containers with hot water for the baptisms. Henninger, who drives a Mercury Sable, travels with her own supply of hot water, which she transports to the churches in a Coleman jug. The hot water in the insulated containers will have cooled to the right temperature by the time it is poured over those little heads.

“Not all of them have running water or functioning bathrooms,” Henninger said of the mission churches. 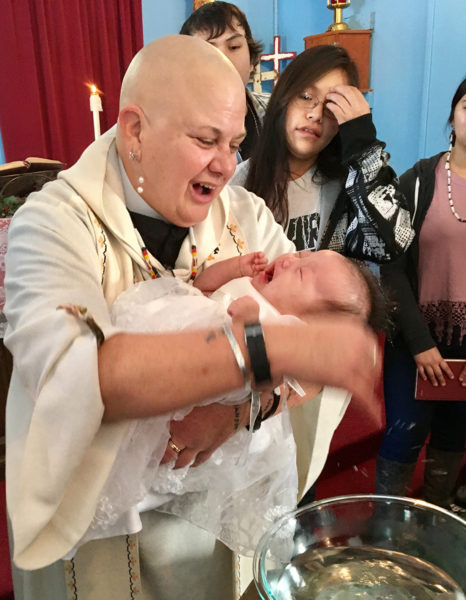 Christmas and Easter are the times of the year when people who have moved away from the reservation return home to visit family, often bringing children who need to be baptized. Stanley and Henninger never know how many baptisms they will end up performing, but it is guaranteed to be part of the service. Some of the children are the fifth generation to be baptized at the family’s home church, Stanley said.

Stanley’s largest service likely will be the first, with up to 100 people filling St. Thomas’ Episcopal Church. This and the other early services on her route will be followed by holiday parties at the churches, while the churches toward the end of her route are reversing that schedule and planning their festivities before the evening services. Stanley, though, won’t get to stay for much of the fun.

“I don’t have time to stop after the service and go to the festivities,” she said, adding that she also functions as the altar guild at some of the churches. “I have to get in the car and drive to the next church and set up for the service.”

As she works her way southeast toward Rosebud, South Dakota, she knows she will get a 20-minute break during her stop in Mission for the fifth service, because she lives a block and a half from Trinity Episcopal Church. She will use that time to go home and get more water for the rest of the evening’s baptisms.

Henninger, who will celebrate her eighth Christmas at Rosebud mission, echoed that sentiment: “The ministry’s difficult, but honestly there’s nowhere I’d rather be than serving with the people here.”

After finishing her day at Trinity Episcopal Church in Mission, Stanley expects to make it home before 1 a.m., and with Christmas Day off, she will drive about seven hours to visit relatives in Colorado. Don’t wait for her for dinner, she told them.

And given how exhausted she expects to be Christmas morning, she has joked with members of the Rosebud’s congregations that they should only try to contact her in a grave emergency.