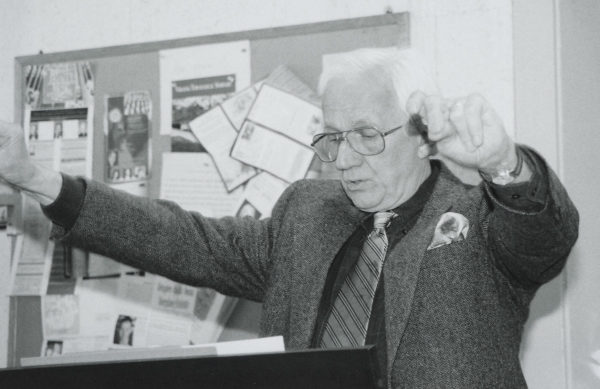 Church musician Raymond Glover, 89, who influenced millions of Episcopalians by being the general editor of The Hymnal 1982, died Dec. 15 in Alexandria, Virginia.

Glover was born in Buffalo, New York, and began his musical life as a young chorister at St. Paul’s Cathedral there. Later, he sang in the choir at St. Mary Magdalen, when he was an undergraduate at the University of Toronto, studying composition with Healy Willan, who became his mentor and friend. His next move was to Union Theological Seminary to earn a Masters of Sacred Music. He returned to Buffalo as cathedral organist and choirmaster and met Joyce MacDonald (1923-2013), who was director of Christian education. They were married on Easter Monday 1957 and remained partners in so many ways throughout their life together.

From Buffalo, they moved to the cathedral in Hartford, Connecticut, in 1962, where Glover built a vibrant music and arts program that reached deep into the urban community on the church’s doorstep and beyond into the surrounding suburbs. The highlights of those 11 years at Christ Church Cathedral included numerous organ recitals and flower shows, performances of Menotti’s Amahl and the Night Visitors, Britten’s Noye’s Fludde and St. Nicholas, and a professional recording of the choir to assist the fundraising for their two-week tour of England in 1971.

The 1960s were a time of great change, and Glover played his role in musical response to liturgical reform as a member of what was then known as the Episcopal Church’s Standing Commission on Church Music. During this decade, he taught at Berkeley Divinity School and found time while on the Yale campus to study organ with the university’s organist, Charles Krigbaum. Then in 1966, Glover joined Jim Litton and Gerre Hancock to found the Association of Anglican Musicians (AAM) and served as president from 1969-70.

Jack Spong, who was then rector of St. Paul’s in Richmond, Virginia, and later became bishop of the Diocese of Newark, called Glover to become director of music. During his time there, Glover oversaw the building of new choirs, music and arts programs and a new organ. He continued to travel extensively as chair of the church music commission’s hymnal committee, preparing the way for the new hymnal, which he was appointed to edit in 1980.

The Hymnal 1982 was dedicated at Washington National Cathedral in 1985, and Glover went on to edit a four-volume companion. In 1986, he was granted an honorary doctorate from Virginia Theological Seminary (VTS), where he later joined the faculty as professor of music and organist (1991-2000). With Marilyn Keiser and Carol Doran he was instrumental in the development of the Program for Musicians Serving in Small Congregations. Following his retirement, Glover continued to teach and develop new courses in collaboration with VTS colleagues.

In addition to his decades of service to the Episcopal Church, he also taught music and conducted choirs for independent schools in each of the cities where he was organist and choirmaster – Nichols in Buffalo, Kingswood-Oxford in Hartford and St. Catherine’s in Richmond.

Glover will be buried at Virginia Theological Seminary, following a funeral in the seminary chapel at 10:30 a.m.on Dec. 28. Donations will be gratefully received by VTS and AAM. He is survived by his daughters, Margaret and Katie, and grandchildren Sarah and Simon Lasseron and Rachel and Susannah Mahon.