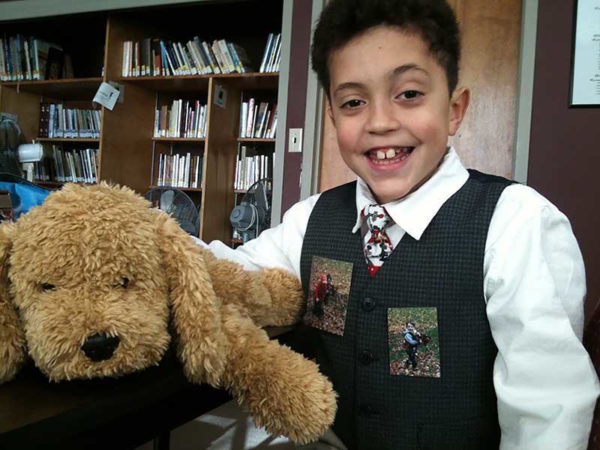 Tain Scott wears pictures on his vest of his godbrother, Ben, who was killed at Sandy Hook Elementary when a gunman blasted his way into the building. Tain’s mother, Sophfronia Scott, printed two photos of Tain and Ben playing in a pile of leaves in her yard after Tain requested to wear them to Ben’s funeral. She fastened them with paper clips to Tain’s vest. Photo: Sophfronia Scott

[Religion News Service — Newtown, Connecticut] Five years ago my son, Tain, was sitting in his third-grade classroom in Sandy Hook Elementary when a gunman blasted his way into the building and killed 26 adults and children — including Tain’s godbrother, Ben — whose mother is Tain’s godmother.

I barely have words for the grief that washed over us. I wasn’t sure how to help Tain deal with the life-shattering effects of such a horrific tragedy. Eventually I sensed I had to walk through it with my son — and sometimes let him lead the way.

Only Tain knows the depth of his loss and the shock of realizing a child even younger than himself can die. He has few words for the magnitude of what happened but I knew he had to work his own grief, and the way he did so would determine the way in which he walked through the world — whether he could live in faith and not fear.

All I could do was listen. My own grief overwhelmed me, though, and I wanted, needed, to feel in faith that I could grasp a sense of my own hope and positivity again. But in a season when the worst had happened, how could I summon such faith? Muscle memory or, more accurately, heart memory came into play.

Our pastor, Kathie Adams-Shepherd, said faith is people showing up for you. She would reiterate it many times in those days. Perhaps this is what Tain experienced. I now see I was holding fast to faith when I stood with him in his pain. And this is what he needed. I suppose God had worked on me, opening my eyes and ears to what Tain was telling me.

Here’s what I mean. Tain was getting dressed for Ben’s funeral, looking at himself in the mirror. He was quiet. Then he said this: “I want to wear pictures of Ben.”

I showed him the square badges a friend had made so we could tell who was family and to make sure we were all seated together at Newtown’s Trinity Episcopal Church. We knew it would be packed.

“OK,” I said slowly. Time was getting short. I was responsible for driving a van of family members to the church. But I knew this was a request that had to be honored.

I went to the kitchen computer with photos my husband, Darryl, and I had put aside for the wake. I printed up two of Tain and Ben playing in a pile of leaves in our yard. I cut them into squares and fastened them with paper clips to Tain’s vest.

He nodded and smiled.

At the church, whenever anyone asked Tain about the pictures he talked about Ben, who was his godbrother, and how much fun they had playing in the leaves. In the months to come, he surprised me by how quick he was to talk about Ben. When we met strangers and they’d find out where we’re from, they’d ask the inevitable questions. I would deliver a simple answer that I hoped would end the conversation quickly: “Yes, close friends of ours lost their child.” But Tain would interject pointedly: “Mama, he wasn’t just a friend. He was my godbrother.” He held and still holds his grief strong, but lightly, as though he were holding his friend’s little hand.

One night, not long after the tragedy, I was putting Tain to bed and I asked how he was doing, how he was feeling about Ben. I wasn’t sure if this was the right thing to ask or what he would say. But he looked at me, his brown eyes wide with wonder.

“Mama, I just have the feeling I’m going to see Ben again. He’s going to come down from heaven and he’s going to be here with all of us.”

In our church we recite the Nicene Creed, which says, “We look for the resurrection of the dead, and the life of the world to come.” I’ve read “Surprised by Hope” by the theologian N. T. Wright, who describes how branches of the Christian faith have downplayed the concept of bodily resurrection. The idea of leaving earth for a better place gained traction and the idea of God’s kingdom being right here, right now, faded. I believe in the bodily resurrection. Tain’s words that night told me he does, too, but he knows it without having read N. T. Wright. He knows it in a deeper way than I can ever comprehend.

Tain’s words gave me hope, and I realized this is what faith does. It provides buoyancy, allowing you to rise to the surface. I’m grateful Tain has these feelings. I’m grateful for the voluminous tears we’ve all cried. I’m enormously grateful that I had not been in a mind so thick and clouded with grief that I couldn’t see or hear Tain’s needs. Instead, my heart found its muscle memory and acted from a familiar place. It whispered a reminder to take his hand and walk through the darkness with him.

— Sophfronia Scott co-authored with her son Tain Gregory the book “This Child of Faith: Raising a Spiritual Child in a Secular World,” published by Paraclete Press. The views expressed in this opinion piece do not necessarily reflect those of Religion News Service.