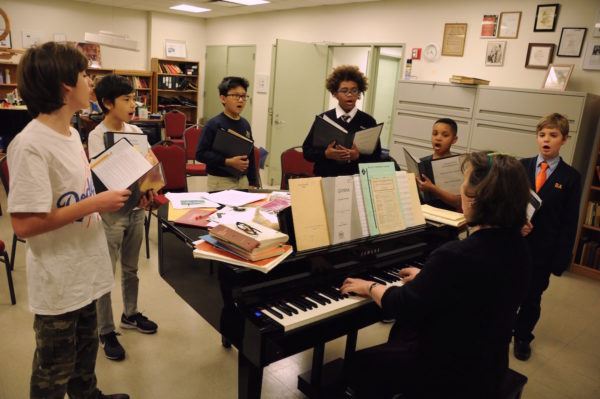 Music director Claudia Dumschat plays the piano and conducts after-school rehearsal for several boys from the Choir of Men and Boys at Church of the Transfiguration in New York. The professional choir is one of the oldest of its kind in the Episcopal Church. Photo: Amy Sowder/Episcopal News Service

[Episcopal News Service] Begun in a private home in 1848, five streets south of its current Manhattan location, the Church of the Transfiguration has welcomed all sorts of people to warm up inside its hallowed, historic doors.

It’s lovingly called “The Little Church Around the Corner” because when the church arranged a funeral for an actor in 1870, judgmental people would whisper that there was a little church around the corner where “they do that sort of thing.” Actors were considered immoral and disreputable. Church legend says that Joseph Jefferson, the actor’s friend who arranged the funeral, replied, “God bless the little church around the corner!”

And that sentiment stuck. The church’s mission to welcome all visitors regardless of such things as profession, race, nationality, reputation or status was established from the start. Christmastime can be a reminder to follow the example of inclusiveness and generosity to unexpected visitors, from wealthy foreign kings to desperate young parents.

Enter the church’s Choir of Men and Boys, circa 2017. On Dec. 15, the group will perform a fully staged and costumed production of Gian Carlo Menotti’s opera “Amahl and the Night Visitors” with a full orchestra. The Italian composer created the Christmas opera specifically for children.

Luciano Pantano, 11, plays the starring role of Amahl, a disabled boy who lives with his mother in poverty near Bethlehem in the first century, shortly after Jesus’ birth. The three kings knock on their door in the middle of night asking for a place to rest. Then, tales are swapped, neighbors gathered, gold stolen, generosity shown and miracles revealed. 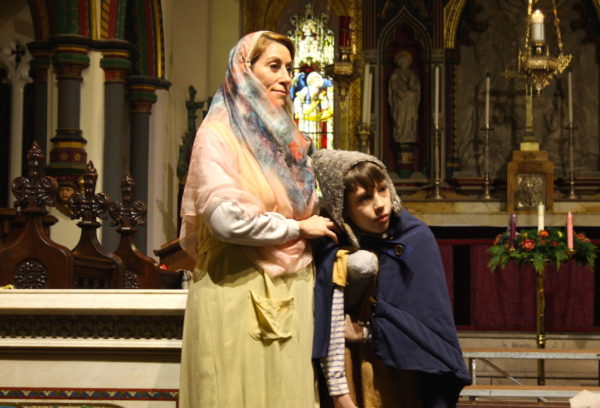 Pantano is excited to sing Amahl’s part, but he also loves being one among many in the choir team, which includes about a dozen boys and 10 men. He commutes about an hour from Brooklyn to rehearse with the other boys twice a week after school, sing every Sunday, and do special performances.

“It kind of opens up a new part of my life,” Pantano told Episcopal News Service after an early December rehearsal. “I have a lot of new friends from many new, different places. I get to talk and socialize.” 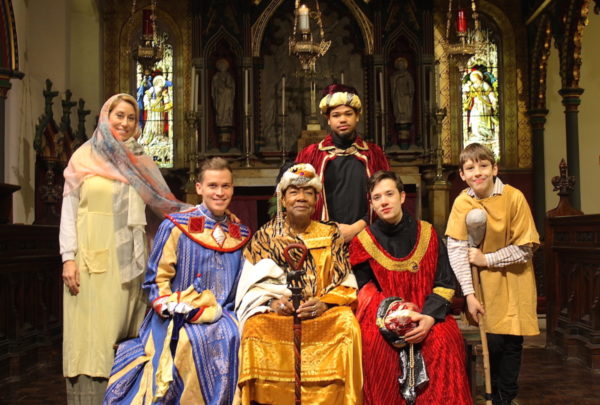 Several of the Church of the Transfiguration’s choirs will form the Choir of Shepherds for Gian Carlo Menotti’s opera “Amahl and the Night Visitors,” which will be performed Dec. 15 at the New York City church. Bottom row, left to right: Ben Thomas as King Kaspar, Charles Brown as King Balthazar, Jake Ingbar as King Melcior and Luciano Pantano as Amahl; top row, left to right: Jodi Karem as the mother and Alexis Cordero as the page. Photo: Church of the Transfiguration

Built-in, unstructured playtime is part of the choir rehearsal program shaped by Claudia Dumschat, the church’s music director since 1999 and the first woman to hold the position since the choir began more than 165 years ago.

She divides rehearsals into small groups to fit the students’ varied schedules. Sunday’s choir mass and other performances are when the men and all the boys unite their voices to create one layered, powerful sound.

“There’s a naturalness children have when they connect to this music. They don’t over-interpret it,” Dumschat said. “It’s how it was meant to be. It’s thrilling. I used to work with adult [only] choirs, and this has really changed the way I interpret the music.”

The church founder, the Rev. George Hendric Houghton, started the Choir of Men and Boys soon after the church formed. With a birthday in the mid-1800s, it’s considered one of the oldest men and boys choirs in the United States.

In recent years, the church established the Girls Choir, the Cherub Choir for small children, and the Lumines Girls Choir for teenage girls.

Both the boys and girls choirs were invited for residency in the summer of 2018 at the historic St. Albans Cathedral in England, where they will sing in daily evensongs and a Sunday mass. They’ll also tour historic sites in nearby London, enhancing their education musically and spiritually. Sponsorships are available.

“He always swears he doesn’t like classical music, but he loves this,” White said with a laugh. “He sometimes asks me to go over the words and music at home. He responds to the music. This is one of the things where he becomes himself.”

Choir isn’t a particularly “cool” extracurricular activity, especially for boys, the director, the rector and parents say. But when these children leave their outside life and enter into the safety of their choir family, they say they feel free to enjoy it regardless.

“The music we sing is like a blast from the past, and you really don’t hear this much. I mostly just listen to R&B, rap and pop,” said Ambar Rosario, 16, also of Washington Heights. She likes the unified nature of choir singing. “It’s a way we can perform as a group, not just solo, and there’s a togetherness. To set myself free in this way is amazing.” 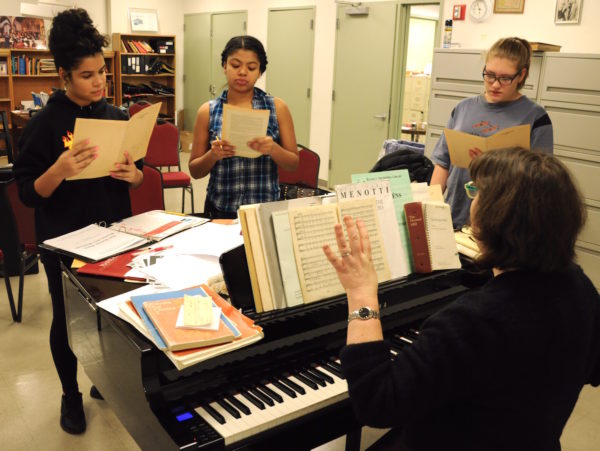 The ethereal emotion that beautiful music can evoke has long been rooted in Anglican Church tradition, said the rector, the Rev. John David van Dooren.

“The music isn’t just beautiful. It shapes us as Christians,” van Dooren said as he sat with ENS before rehearsal.

He looked at Dumschat. “Claudia, she’s created this community and love. Keeping a bunch of boys disciplined is amazing, and she turns them on to a world they’ve never known, musically and spiritually.”

It’s also a professional choir because the boys are paid. True, it’s a paltry sum, but they’re responsible for showing up and doing their part with consistency. Jesse Obremski, now 23, joined the church as a 6-year-old and began singing in the Choir of Men and Boys. Then, he graduated from the famed performing arts conservatory The Juilliard School, and today he’s a professional dancer in the Limon Dance Company in Manhattan. He’s choreographing the Menotti’s Christmas opera and mentors the young boys. 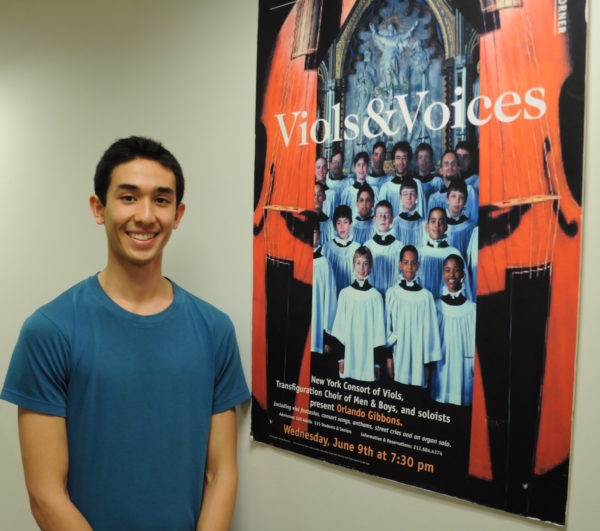 Jesse Obremski, now 23, joined the Church of the Transfiguration as a 6-year-old and started singing in the Choir of Men and Boys. In the poster, he’s the boy on the far left, second row from the bottom. Obremski’s work with the choir and music director, Claudia Dumschat, played a pivotal role in his acceptance into The Juilliard School for dance. Today, he’s a professional dancer who choreographed the choir’s Christmas opera. Photo: Amy Sowder/Episcopal News Service

“She’s taught me about how to approach singing and how to be in it,” Obremski said of Dumschat. “It’s the same with any art form. It’s also about the friendships, the emotional quality, attention to detail and working together.

“Those qualities will hopefully help them when they get older.”

Rounding up and inviting outsiders has always been the way of the Church of the Transfiguration.

Houghton, the first rector, sheltered escaped slaves during the draft riots of the Civil War and maintained a bread line for the unemployed.

The male-only nature of the choir stems from its European monastery roots.

“Eleventh-century monasteries had four-part choirs. The boys sang soprano and the men alto, tenor and bass,” Dumschat said. “It’s the basis of sacred music in Europe.”

Because it wasn’t custom for choirs to include women and girls at the time, composers the likes of Bach, Bernstein, Haydn and Mozart originally meant their music to blend with male voices, young and old. 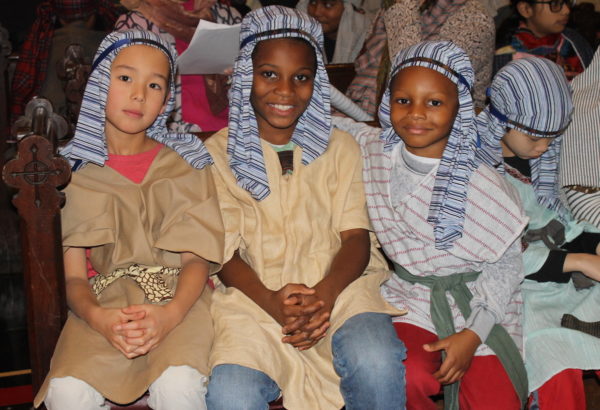 Sascha Haerter, Devin Coleman and Donovan Coleman are part of the Choir of Shepherds in “Amahl and the Night Visitors.” Photo: Church of the Transfiguration

After rehearsal, Alexander Darling, 9, sprawled on the worn, cushy couch in the playroom that features a ping-pong table, video games, plush toys and books. “It’s pretty great,” said Darling, who lives in Harlem. “It’s a little bit like being free ’cause…”

He couldn’t articulate why the choir made him feel free, besides singing in other languages and his love of practicing the songs.

But Darling did have a clear message he wanted to tell other kids: “Believe in yourself, whatever you want to do, and never give up.”