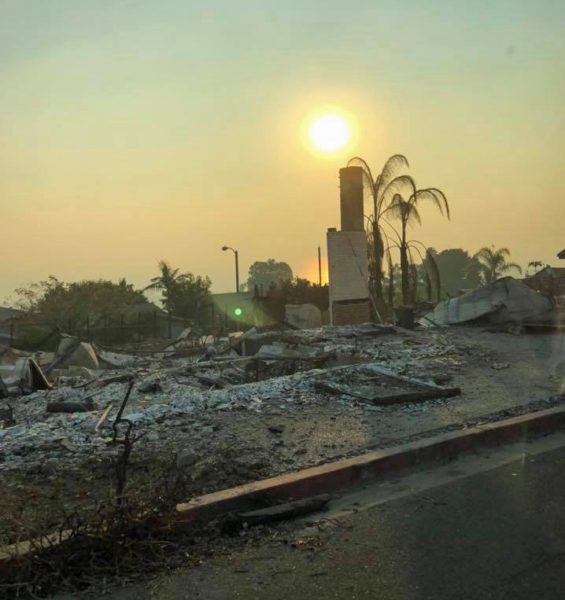 [Episcopal News Service] As wildfires rampage through Southern California for a second week, Episcopalians are finding basic but also innovative ways to help their neighbors.

In many cases, they are doing so by way of ministries they have always done. For instance, Episcopalians in Ojai and Ventura, two hard-hit communities, have ongoing Laundry Love ministries. Laundry Love brings together congregations and homeless guests in laundromats so anyone can get some help doing their laundry and get something to eat. Now with ash and smoke permeating everything, the need is even greater.

The Rev. Michael Bamberger, a member of Episcopal Relief & Development’s Partners in Response team and the disaster coordinator for the Diocese of Los Angeles, said that recognition of the need for Laundry Love ministries to get back in business soon was a good example of the assets-based community development approach for discerning a congregation’s potential ministries.

On Dec. 12, Bamberger was preparing to travel to the burning areas with Los Angeles Bishop John Taylor and the Rev. Melissa McCarthy, the diocese’s canon to the ordinary, to deliver money from an Episcopal Relief & Development grant and a diocesan appeal to expand those ministries. The grant will also help with gift cards and spiritual care for homeless and undocumented people.

For those existing ministries, “all it took was a little bit of money to amp up their programs,” he said. “It’s an existing program that meets a great need, but with this disaster, it’s even more important.” 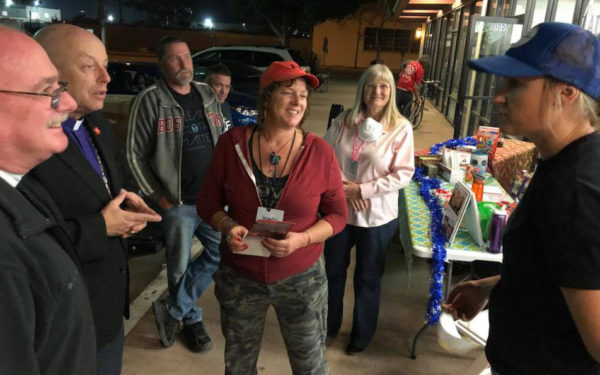 The fires, the first of which began the evening of Dec. 4, have now burned more than 263,000 acres, according to the National Interagency Fire Center. Close to half of that acreage is being burned by the first fire, the so-called Thomas Fire that burned down the hills from between Ojai and Santa Paula into the city of Ventura.

The Thomas Fire has burned northwest into Carpinteria and Santa Barbara, and it is only 25 percent contained. It grew by 1,500 acres overnight Dec. 12 into Dec. 13, according to the Los Angeles Times.

The Times reported Dec. 13 that firefighters think they have finally turned a corner on the Thomas Fire in Ventura County. The Rev. Anthony Guillen, the Episcopal Church’s missioner for Latino/Hispanic ministries, who lives in Ventura with his wife, Guadalupe Moriel-Guillen, was forced to flee the night of Dec. 4 when the fire started. On Dec. 10, they were allowed into their neighborhood for an hour to check on their house, which the flames spared. He recorded a video of the burned-out homes on the street over from theirs.

One of the other four major fires, the Rye, is listed as contained. However, contained does not mean the fire is extinguished, only that firefighters have established a perimeter in which the fire is enclosed. The center’s definitions of “contained,” “controlled” and “out” are here.

Containment on the Lilac 5, Rye, Skirball and Creek fire is at 90 percent or more. Nearly 9,000 firefighters and support personnel are fighting the blazes, the center said. The Los Angeles Times has maps showing the area’s major fires and the evacuation zones.

Air quality is a major issue “not only in the immediate area but all up and down the central coast area,” Bamberger said. “There’s ashes coming down as far north as San Luis Obispo and down into Ventura and Thousand Oaks and that area,” he added, describing a range of about 150 miles. People are being advised to stay inside.

Still looking for an N-95 mask? Free masks are available at several sites on Wednesday, Dec. 13. Visit https://t.co/bjEUdUoCpk to find the distribution site nearest you. The list includes the times to get one. #thomasfire pic.twitter.com/mhk4YP8X7X

Unable to have mass as St. Andrew’s Episcopal Church in Ojai on Dec. 11 because of air quality concerns, the Rev. Greg Kimura celebrated Holy Eucharist via Facebook Live. He included announcements about the Thomas Fire’s status (beginning at the 3:58 mark). “I am very wary of spreading rumors or ginning up undue fear and concerns,” he said, explaining that he was passing on only verified information from governmental sites. He cautioned viewers that some fires they might be seeing around Ojai were backfires lit to prevent the main blaze from burning into Ojai proper.

Discussing surrounding fires and the spread of the Thomas Fire and its accompanying expanded evacuations, Kimura said, “I want to remind folks that we are not out of the woods yet and that there are other communities that are at risk … that are going to go through exactly what we are going through right now.”

St. Andrew’s often livestreams its Sunday Eucharist, but this time, Kimura, the rector, streamed the service from a hotel room. The Eucharist has had 393 views, both live and on-demand, and 42 people responded with comments.

Kimura said that, despite the occasional appearance of blue sky, air quality is still classified as unhealthy. “Larger smoke particles and smoke will make air quality look worse,” according to a tweet on the Santa Barbara County Twitter feed, but it does not have the same health impacts as fine particulate. Tiny particulate can pass through breathing masks, Kimura warned.

#ThomasFire – The large particles in the air are concerning, but it is the fine particles you cannot see that greatly affect your health. Wear masks when the air quality is unhealthy. https://t.co/ZUQA1Myzzl pic.twitter.com/6St87HM2Pk

Bamberger said the evacuations and especially the air quality warnings are impacting the area’s vulnerable populations even more than residents with greater access to resources. “The affected areas are heavily agricultural, and then closer to the coast most of the area is tourist-driven. When the tourist industry suffers, the undocumented people are the people who run the kitchens and clean the rooms, they’ll be out of work,” he said. “And many of them are reluctant to access government services.”

That’s because of fears and rumors that federal Immigration and Customs Enforcement agents will detain undocumented people who ask for help.

“We’ve not heard any stories of them going to the shelters but getting folks to commit to going to a shelter is hard enough and then if you add the issue of whether or not ICE might be present just makes it all the more complicated.”

Another population that worries Bamberger are people in addiction recovery who depend on churches of all denominations for the 12-step meetings they host. With churches included in mandatory evacuation zones and people being warned to stay inside because of the bad air, he wonders how those folks are coping. “Sometimes we don’t think about who the vulnerable communities are,” he said.

All of the Episcopal churches in the paths of the fires are safe, albeit plagued by the smoke and ash affecting everyone. All Saints-by-the-Sea Episcopal Church in Montecito, near Santa Barbara, is in a voluntary evacuation zone and has cancelled all activities because of that and the air quality. “Our highest concern is the well-being of our parishioners and the safety of everyone in our community,” the Rev. Aimée Eyer-Delevett wrote on Facebook on Dec. 12. “We can each assist in ensuring public health and safety by cooperating with our public officials’ instructions.”

The All Saints rector advised parishioners to wear a N-95 mask for any “brief outdoor excursions.” She also reported that clergy outside of the fire zones were organizing parishioners who were willing to take in evacuees.

The Rev. Adam McCoy, prior of the Mount Calvary Monastery above Santa Barbara, reported Dec. 11 on Facebook that the evacuation zones around the city had nearly reached them. The monks of the Camaldolese Monastery of the Risen Christ in Los Osos, a little less than a two-hour drive away, are ready to take in the Order of the Holy Cross brothers if need be.

The brothers have lived through wildfires. In November 2009, a fire driven by 70-mph winds destroyed their 41-year-old Spanish-style monastery, which had hosted international conferences and retreat guests. Damages were in the millions of dollars.

“We remain on alert and are ready to go if we need to,” McCoy wrote. “Please pray for all who are impacted by the fire, particularly those who have lost their homes and livelihood.”