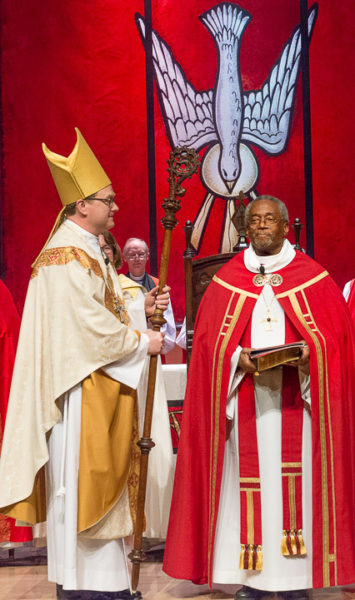 Brown was elected on July 15, marking the culmination of a search that began in April 2016, after Bishop Wayne P. Wright announced his retirement.

Despite the snow, approximately 750 people attended and participated in the two-hour service, with the theme of “Come, Holy Spirit,” at Delaware State University’s Education and Humanities Theater.

The Drum Circle of the Church of Saints Andrew and Matthew signaled the start of the three processionals with synchronized rhythm that immediately set a tone of high energy for the pageantry of the celebration. Accompanied by organ and a tympani and brass quintet, a 112-voice choir, comprising singers from churches across the diocese, swelled in song and heralded the processions of service participants; diocesan, ecumenical, and interfaith clergy; and visiting and co-consecrating bishops.

The Rev. Amanda K. Robertson, associate rector at Brown’s former parish in Charlotte, North Carolina, delivered the sermon, which drew appreciative laughter and murmurs of agreement. She also acknowledged her former boss as an admired colleague and true friend.

She went on to urge Brown, “Remember your authority. As bishop you will be entrusted with oversight that is intended to be rooted in relationship and respect. Even someone as committed as you are to serving alongside and not over, to uplifting others’ gifts and ministries, and giving credit where credit is due, even you must accept the imbalance of power and authority that will exist in most of your daily interactions. You will need confidantes and counselors who are able to speak as freely as you are.”

Echoing the theme, she said, “The Holy Spirit invoked in blessing and consecration is the power by which the raw material of our lives becomes holy. And so it is, that in just a moment’s time, a craft beer- and baseball-loving man from the mountains of North Carolina, a scholar of mathematics and ecumenism, a tree house-building father and fan (along with his younger daughter) of Arcade Fire, will be made a bishop in our Church. Come, Holy Spirit.”

Brown followed the exchange of the Peace with his thanks, saying, “It will take me a while to get used to this hat.” He also commented, “Prayer will change your life if you let it.”

On his first Sunday as bishop, Brown attended an evensong service of Lessons and Carols at Christ Church Christiana Hundred in Wilmington.

Brown grew up in Asheville, North Carolina, and studied mathematics and psychology at Duke University. He completed his master of business administration at the University of West Florida while in the U.S. Air Force, worked in finance and marketing at FedEx, and launched an investment firm, before earning a master of divinity from the General Theological Seminary in New York City.

Before the election, he served as rector at Holy Comforter, where he led the merger of separate English and Spanish preschools into a single groundbreaking school focused on bilingual education and dedicated to access for low-income and immigrant families. He previously served as rector of Grace Episcopal Church in Paris, Tennessee.

Following the election, Brown and his wife, Caroline, an accomplished artist, relocated and now live in Wilmington. They have two college-age daughters.

The Episcopal Diocese of Delaware encompasses the three counties of Delaware and includes 9,300 congregants and 34 worshipping communities.