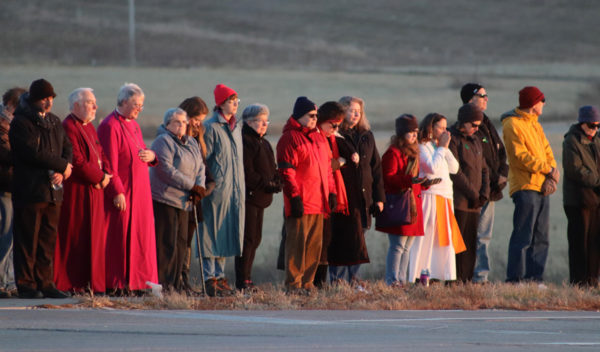 Retired Bishop Christopher Epting, former bishop of Iowa (second from left), leads a closing prayer Dec. 10 at the conclusion of a 3.2-mile walk from the United Church of Christ in Grinnell, Iowa, to the entrance of the Brownells factory. The Rev. Wendy Abrahamson, rector at St. Paul’s Episcopal Church in Grinnell, is in white on the right. Photo: Meg Wagner

[Episcopal Diocese of Iowa] People of all ages and faiths gathered in Grinnell, Iowa, on December 10 for an interfaith service of remembrance for victims of gun violence. Afterward, they walked more than three miles, silently and prayerfully, to stand in witness at Brownells in Grinnell, the world’s largest supplier of gun parts and accessories.

The service and walk were part of 26 Days of Action Against Gun Violence that has been organized by residents, faith leaders and Grinnell College students and faculty. The organizers hope to engage their neighbor, Pete Brownell, president of the National Rifle Association and CEO of Brownells, in conversation about gun safety and ways to reduce gun violence.

“It’s been an organic process,” said Vicky Springer, one of the organizers of the days of action and a member of St. Paul’s Episcopal Church in Grinnell. “It started with neighbor talking to neighbor, individuals coming together with broken hearts, really.”

And not every town in America has the president of the NRA as a neighbor. When Pete Brownell was elected as NRA president in May, his neighbors felt like there was an opportunity for conversation.

The Rev. Wendy Abrahamson, rector at St. Paul’s, said, “After Las Vegas, this all coalesced from different places. Someone asked me, ‘Has anyone ever talked to Pete directly?’ And I went, ‘Huh. That would be kind of respectful towards him as a human being. I’ll try.’”

Abrahamson called Brownell’s corporate office and left a message with his secretary to see if he could meet with her and another pastor to work together toward gun safety. Then she waited. After some time went by, she realized they had mutual friends on Facebook, so she sent him a message through Facebook Messenger. Abrahamson said there has been no response.

“I had found it difficult to understand why a conversation was not occurring in this community about the NRA, about gun safety, when we had this person right in our community that we could engage with in this way,” said Eliza Willis, a political science professor at Grinnell College. “I realized that there were other people who shared my view, that this was something we should be discussing, especially because he is the president of the NRA and we have a chance to engage in some way.”

So, she and others in the group wrote a letter to him as a neighbor, as friend to many people in town, and as a respected member of the community. To them, it seemed like a natural thing to try and have this conversation. 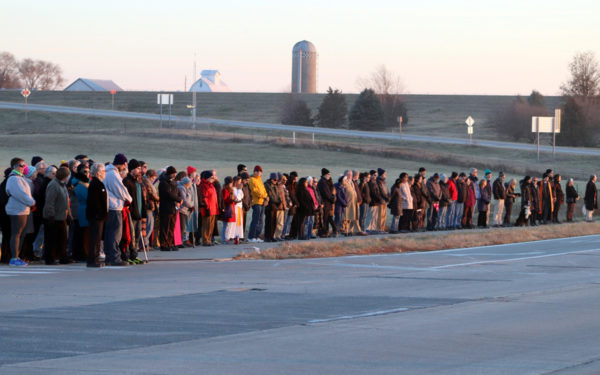 Christian, Jewish and Muslim leaders conduct a service of remembrance Dec. 10 in Grinnell, Iowa, for victims of gun violence. After the service, the group walked to Brownells, the world’s largest supplier of gun parts and accessories, to stand in prayer. Photo: Meg Wagner

Janet Carl, member at First Presbyterian Church in Grinnell said, “I’ve never been a part of an organizing effort that has been quite like this.” Members of the group planned 26 Days of Action Against Gun Violence — one day for every person killed at Sandy Hook Elementary School in Newtown, Connecticut, five years ago by Adam Lanza.

The 26 Days of Action Against Gun Violence has included holding discussions, sharing stories, watching NRA videos, making phone calls to elected representatives, and screening “Gunned Down: The Power of the NRA” and “Newtown.”

David Wheeler, whose son Ben was murdered at Sandy Hook Elementary, came to Grinnell for the Dec. 5 screening of “Newtown” along with the filmmakers. Wheeler also wrote Pete Brownell a letter, asking if they could meet and talk while he was in Grinnell. Wheeler said that Brownell did not respond.

The 26 Days also has featured actions that could be taken by individuals and groups, in public and from home, with lots of opportunities to engage in conversation and learn about gun safety and the impact of gun violence.

“What’s been extraordinary for me personally is that I really feel an empowerment and my fear has greatly been reduced just by taking action,” said Springer. 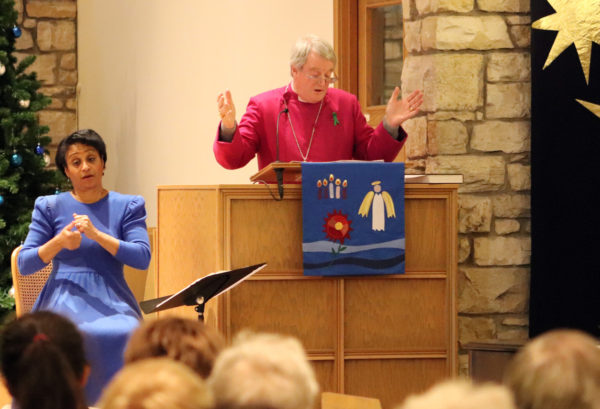 Iowa Bishop Alan Scarfe preaches at the Interfaith Service of Remembrance Dec. 10 in Grinnell. His wife, Donna Scarfe, was the sign language interpreter for the service. Photo: Meg Wagner

The Dec. 10 Interfaith Service of Remembrance was held at the United Church of Christ in Grinnell and was led by Christian, Jewish and Muslim faith leaders. At the service, the Rt. Rev. Alan Scarfe, bishop of Iowa, said, “Every valley of ignorance and despair must be uplifted. Every mountaintop of fixed positions and fearful hoarding must be brought low. And every crooked road of legislative cat-and-mouse twisting and turning needs to be made straight so everyone can see the glory of God and the glory of a humanity able to learn war no more — turning its spears into pruning hooks and its swords to plowshares.”

“What could be more Iowa than that?” he added.

After the service, about 100 people joined the 3.2-mile silent walk to the Brownells factory by Interstate 80 in Grinnell. As the sun was beginning to set, they reached the turnoff to the Brownells factory and retail store. There, the group stayed for a while and prayed together. The 26 Days of Action is culminating in Honor with Action, a vigil on Dec. 14 in Central Park in Grinnell.

“The thing that means a lot to me in this is that it is 26 days of ACTION. Because, as everyone else is saying, I’m sick of thoughts and prayers,” Abrahamson said. “I feel like this is prayer — what we are doing.”

— The Rev. Meg Wagner serves as the missioner for communications and reconciliation for the Episcopal Diocese of Iowa.