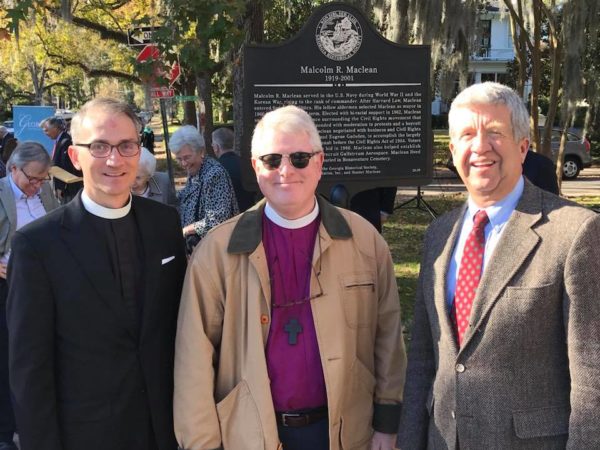 [Episcopal Diocese of Georgia] The summer of 1963 was a hot one in Savannah, and in the words of one observer, the city could have exploded. Instead, a coalition of the city’s leaders was able to accomplish a peaceful desegregation of Savannah before the Civil Rights Act of 1964.

The Georgia Historical Society recently recognized one of those leaders, the late Malcolm Maclean, mayor of Savannah from 1960 to 1966 and lifelong Episcopalian, with the dedication of the 32nd marker on the state’s Civil Rights Trail.

Otis Johnson, the mayor of Savannah from 2004 to 2012, provided a historical context, saying, “In 1963, during a hot summer, the city could have exploded: the first 19 African Americans went to Savannah High School and there were two-a-day demonstrations downtown. Maclean, along with W.W. Law, Eugene Gadsden, Curtis Cooper, … the bishop of the Catholic Diocese [the Rev. Thomas J. McDonough] and the Episcopal diocese [the Rev. Albert Stuart], worked to calm things down.”

In 1964, Martin Luther King Jr. declared Savannah the most desegregated city south of the Mason-Dixon Line. 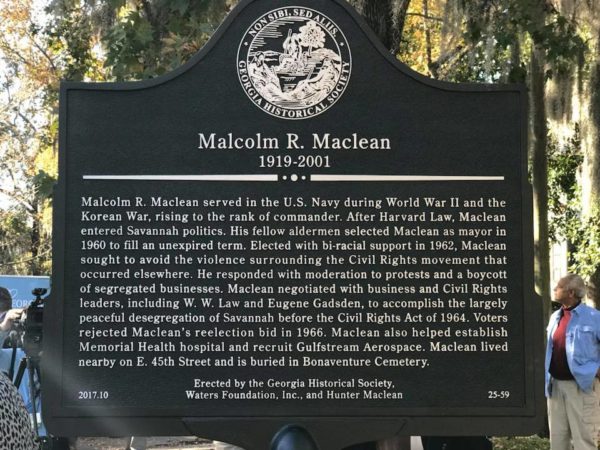 The marker honors Malcolm Maclean, the mayor of Savannah from 1960 to 1966 and a lifelong Episcopalian who help to achieve the largely peaceful desegregation of Savannah. Photo: Mills Fleming

Current Savannah Mayor Eddie DeLoach, remembered Maclean as a man who “stood when others did not.”

“Savannah is a better place than it otherwise would be because of Mr. Maclean’s witness,” said Georgia Bishop Scott Benhase. “His commitment to doing what was right, regardless of the political costs, makes him an example to all who hold elective office in our country today. His Christian faith shaped his politics without him needing to trumpet it. His faith was simply who he was.”

Maclean was a lifelong member of Christ Church in Savannah where his wife Frances still attends services. The marker can be found at the Atlantic Mall, 45th and Atlantic Avenues.

– Anna Iredale is the director of communications for the Episcopal Diocese of Georgia.