[Episcopal News Service] Reports of Obamacare’s death may have been greatly exaggerated.

Millions of Americans this month have signed up for health insurance on HealthCare.gov, the website established by the Affordable Care Act, despite the Trump administration’s cutting spending on advertising and assistance and declaring President Barack Obama’s signature law “dead” and “gone.” The administration also cut the sign-up period in half, so with a window of only 45 days, Episcopalians have joined with activists and organizations around the country to get the word out.

So far, those efforts appear to have succeeded in a big way as the Dec. 15 deadline approaches.

Be on the lookout! Open Enrollment for 2018 coverage ends on December 15. https://t.co/rxEC3NkHV4 pic.twitter.com/ofEmHUfnhh

“This has been fun. This has been an underdog story,” Ariel Miller, an Episcopalian from Cincinnati, Ohio, told Episcopal News Service. She has worked at the grassroots level to spread the word on social media and to invite local media coverage of the sign-up period. “We’re just trying to make people aware that all the resources are still there.”

The Episcopal Church’s Office of Government Relations has encouraged dioceses and congregations to help promote the sign-up period however they can. Often that advocacy has simply meant distributing key information about the process. The Diocese of Southern Ohio invited Miller, the diocese’s former Episcopal Community Services executive director, to write an article for the diocesan digital newsletter.

On Dec. 2, from 8 a.m. to 3 p.m., St. John’s Episcopal Church in Sylva, North Carolina will host Legal Aid of North Carolina, a group that is providing guidance to state residents looking to sign up for health insurance on the federal marketplace.

“I was happy to open up the church for something like this,” said the Rev. Pattie Curtis, rector at St. John’s. “I believe that people ought to have access to affordable health care.”

The Office of Government Relations, though not involved in the sign-up process, has links on its website to resources that can assist people looking to sign up for health insurance or those who want to help get the word out.

The office also has advocated in Washington, D.C., for policies that would fulfill multiple General Convention resolutions calling for universal health care or steps in that direction, most notably in a series of resolutions passed in 2009. One of those resolutions cited “the Gospel message of concern for others which extends to concern for their physical health as well as spiritual well-being.”

That message has inspired Miller’s work in Ohio.

“I think that Jesus spent a tremendous amount of time listening to and responding to people that were sick and helping them overcome their illness,” she said.

“Jesus over and over again in the text promotes healing and intends for all of God’s children to be well both physically and spiritually,” Lilja said.

Her agency, a partnership of the state’s two Episcopal dioceses and the New Jersey synod of the Evangelical Lutheran Church in America, has sought to connect more people with insurance coverage during the federal sign-up period by providing information directly to clergy serving groups more likely to struggle with obtaining coverage and navigating the process, such as seniors, the poor and immigrants.

The agency also emails a weekly newsletter to its subscribers that ties each Sunday’s liturgical readings to current events and policy matters. Health care has been a top focus since the federal enrollment began Nov. 1, especially with federal and state cuts to promotion and enrollment assistance.

“We’re trying to plug the holes with our community partners and trusted organizations around the state,” Lilja said. “It’s absolutely a spiritual issue, it’s a faith issue and it’s also a public policy issue. And at the end of the day, it’s an economic issue.” 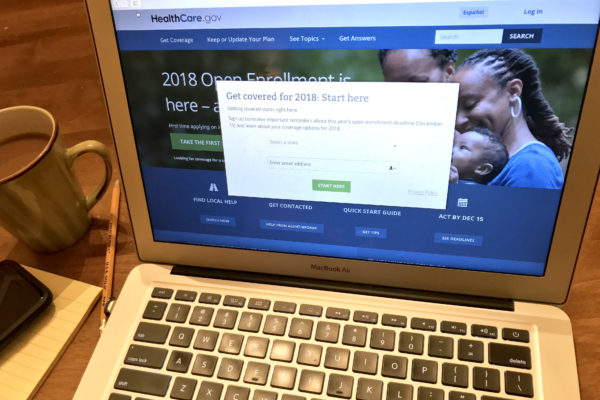 Nearly 800,000 people enrolled for health insurance coverage on HealthCare.gov in the week ending Nov. 18, pushing the cumulative total to almost 2.3 million, according to the most recent weekly update from the federal Centers for Medicare and Medicaid Services.

Sign-ups in these early weeks of enrollment have outpaced the results seen in past years to this point. It remains to be seen if the shorter enrollment period will have a negative effect on the final total, and there are other threats to the federal marketplace sustainability, such as the loss of some insurance providers. But supporters of the Affordable Care Act say the strong sign-up response so far flies in the face of the dire assessments of President Donald Trump and congressional Republicans.

“It’s the biggest start to open enrollment ever,” Lori Lodes, a former Obama administration official, told the New York Times after the first week’s totals were released. Lodes is a founder of Get America Covered, a nonprofit that helps spread information on health insurance options. “It shows that people really want to get health insurance and value it.”

HealthCare.gov is the enrollment site for residents in the 39 states that opted out of setting up their own insurance marketplaces. Last year, 9.2 million people signed up through the federal marketplace during an enrollment period that lasted until the end of January.

Texas is ranked last in the country in access to health care, Episcopal Health Foundation’s Brian Sasser said, so the sign-up numbers are cause for hope.

“That’s the easiest way now for folks to get health insurance, and we believe access to care is a key reason many people don’t get preventive care and care that they need,” said Sasser, communication director for the Houston-based foundation, which serves the Diocese of Texas. “If you give access to care, it makes a community healthier all around.”

This year, the foundation awarded $92,000 to a group called Young Invincibles to help promote the sign-up period to young adults in Texas.

The foundation also conducts research on the problem of the uninsured in Texas and the impact the Affordable Care Act has had on increasing the rate of coverage. Sasser said the goal of the research is to help improve health care access for all Texans: “What’s keeping people from having access to care, and what can we learn from what’s going right and what’s going wrong to increase that?”