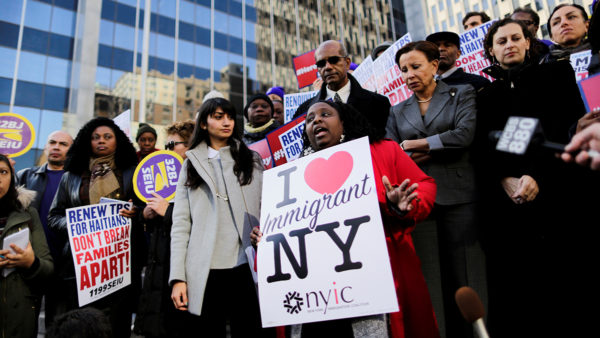 [Episcopal News Service] Haitian Episcopalians living in the United States were shaken this week by news the Trump administration is ending a program that has protected from deportation Haitians who couldn’t return to their country after a devastating 2010 earthquake.

The Haitian communities in some American cities have grown large enough to support sizable Episcopal congregations, like St. Paul’s et Les Martyrs d’Haiti in Miami, Florida, and the Haitian Congregation of the Good Samaritan in New York City. Some of those families’ legal status could be thrown into limbo by the administration’s decision.

“It’s a very tough situation,” said the Rev. Panel Guerrier, associate priest for the Haitian congregation at St. Paul’s Episcopal Church in Naples, Florida. He is a permanent resident, but his 23-year-old daughter is among those who could be deported in 2019 unless they are able to change their residency status.

Guerrier said his community’s hope for a legislative solution is mixed with plenty of uncertainty.

“We don’t know if they will come up with some change in the immigration law that will help with the Haitian people,” he said, “It would be very difficult for them to go back.”

The Episcopal Church has long joined other faith groups in advocating for granting what is known as Temporary Protected Status to immigrants who can’t return to their home countries because of natural disasters or armed conflicts. That status was granted in 2010 by then-President Barack Obama to Haitians who were in the U.S. at the time of the earthquake.

The Episcopal Church’s General Convention approved a resolution in 2015 pledging to support Temporary Protected Status “for all immigrants fleeing for refuge from violence, environmental disaster, economic devastation, or cultural abuse or other forms of abuse.”

The Trump administration had previously announced it was ending Temporary Protected Status for citizens of Sudan, Nicaragua and Honduras. It remains in effect for those from El Salvador, Nepal, Somalia, South Sudan, Syria and Yemen.

The loss of Temporary Protected Status for Haitians “directly affects several members of our congregation,” including a mother with two children, said the Rev. Sam Owen, priest-in-charge at the Haitian Congregation of the Good Samaritan.

“They’re leaders in the church,” Owen told ENS. “If they’re forced to return, it’s not just going to be a blow to the leadership of the church, it sort of rips our hearts out. These are people that we love and that love us.”

Temporary Protected Status, or TPS, “has been a lifeline to hundreds of thousands of individuals already in the United States when problems in a home country suddenly make return untenable,” the Episcopal Public Policy Network, or EPPN, said in an October policy alert calling on Episcopalians to defend TPS.

Earlier this year, the Episcopal Church joined more than 400 other faith leaders and organizations in signing a letter urging the Trump administration to extend Temporary Protected Status for Haitians. On Nov. 21, the Office of Government Relations issued a statement expressing disappointment in the administration’s decision.

“Conditions in Haiti are currently unsafe and unstable, with critical lack of improvement since the 2010 earthquake compounded by devastation from Hurricane Matthew and a cholera epidemic,” the statement says. “At this time Haiti cannot safely repatriate 50,000 people, and the decision to terminate the program will harm our communities, the Haitians who will be forced to return and communities in Haiti.”

More than 50,000 Haitians are living in the United States under the program. The Department of Homeland Security announced Nov. 20 that it had decided to let the protections end for those Haitians, giving them until July 2019 to obtain permanent residency status, return to their native country voluntarily or face deportation.

“The decision to terminate TPS for Haiti was made after a review of the conditions upon which the country’s original designation were based and whether those extraordinary but temporary conditions prevented Haiti from adequately handling the return of their nationals,” the statement from Homeland Security said. The department “determined that those extraordinary but temporary conditions caused by the 2010 earthquake no longer exist.”

Archdeacon J. Fritz Bazin of the Diocese of Southeast Florida disagreed strongly with such optimistic assessments of conditions in Haiti.

“Haiti isn’t and will not be in any condition to receive some 50,000 returnees from the U.S. in 2019,” Bazin, a native of Haiti, said in an email to ENS. “Clearly a more comprehensive solution needs to be considered,” he said, pointing to a legislative proposal in Congress to create a path to permanent residency for those Haitians.

The Diocese of Haiti is part of the Episcopal Church, and the church has been deeply involved in rebuilding efforts in the country since the magnitude 7 earthquake that struck on Jan. 12, 2010. The earthquake killed more than 300,000 people, left as many wounded, and displaced more than 1.5 million.

As the country has slowly recovered, signs of the earthquake’s toll have remained. It destroyed 80 percent of the Diocese of Haiti’s infrastructure in Port-au-Prince, for example, including Holy Trinity Cathedral, which has yet to be rebuilt.

“Almost all infrastructure on the local stage was destroyed by the earthquake and has not been built back,” said the Rev. Nathanael Saint-Pierre, a Haitian priest in New York City.

Saint-Pierre, who was priest-in-charge at New York’s Haiti Congregation of the Good Samaritan in 2010, noticed an increase in Haitian immigrants joining the congregation after the earthquake, as the church provided help to those seeking Temporary Protected Status.

Now rector at St. Augustine of Hippo Episcopal Church in Manhattan, Saint-Pierre said he is concerned about what will happen to Haitian immigrants who suddenly need to obtain permanent residency status since they won’t have many options.

“The effect on the [Haitian] community is definitely negative,” he said. “I don’t think there is a lot of hope for these people.”

Lack of rebuilt infrastructure is one of the problems facing those who would be forced to return to Haiti, which has long been considered the poorest nation in the Western Hemisphere. Difficulties in finding employment and health care also are concerns, Saint-Pierre said, especially if there is a large influx of people at once.

“We are disappointed because we know about the situation in Haiti. It’s very difficult,” Milien said.

The Sunday service in French and Creole at his church typically draws more than 100 people. Milien didn’t think the decision to end Temporary Protected Status would have much effect on his congregation because most members are U.S. citizens, but it will be felt by the local Haitian community.

Additional concerns facing those who might be forced to return to Haiti include recent political protests that have turned violent and the threat of crime, said Guerrier, the Naples priest.

That danger prompted Episcopal leaders last month to postpone the grand opening celebration at a rebuilt school in Haiti out of a general concern for security amid an outbreak of political violence, some of which had affected foreign visitors.

Guerrier’s daughter has applied for permanent residency in the United States and the family is hopeful she will be able to stay. He estimated about 15 of his parishioners, in a congregation of about 50, also are in legal limbo due to the expiring Temporary Protected Status.

His wife and son, on the other hand, already are on the path to permanent residency and are waiting to schedule immigration interviews. Guerrier’s status is secure, and he has applied for U.S. citizenship.

“We are to keep praying, and acting,” he said.

Owen said he feels “a fair bit of despair” about how the Trump administration’s decision will affect his New York City congregation of about 70 Haitians and the local Haitian community, but they also find hope in God.

“This has only served to strengthen our faith and to put it where it belongs, in standing with the marginalized and being there in a way that is of service to them,” he said.