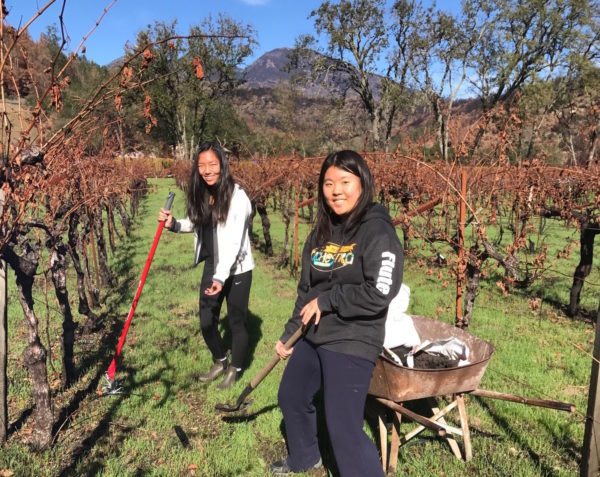 [Episcopal News Service] Emma Green was scrolling through her Facebook news feed about 9:30 p.m. in early October when she first learned about the Northern California fires in Napa, Sonoma and Solano counties. Throughout that harrowing first night, she and her fellow volunteers connected about 2,000 people requesting help to those asking how to help.

Green is poised to provide efficient aid like few people are – all because she’s the Community Meal Program coordinator at the Episcopal Church of the Epiphany in Vacaville, a town in Solano County. With fewer than 100 members, her church is small but the community program is mighty.

“Because we feed the homeless on a regular basis, we already have that network of contacts in place. If a caterer makes food, with one text we can have that in 20 minutes,” Green told Episcopal News Service. “Our network for our little meal program was what kicked in that first night, that first 24 hours,” Green said. “I was so proud of our little church.”

You’d think Thanksgiving, a holiday to celebrate God’s gifts of abundance, might be hard this year for these fire victims and volunteers. When it comes to food and drink, many Episcopalians in the fire-ravaged area lost so much, yet they gained community support they never expected. Not to minimize the traumatic disaster that took more than 40 lives and ravaged 245,000 acres, but the galvanizing of volunteers and donations since then has touched the hearts of many.

Green’s church will have a Thanksgiving dinner Nov. 24 for its regularly scheduled Friday night hot meal for the needy. On Nov. 21, the regular Tuesday soup night, they had pumpkin cream soup with stuffing and pumpkin pie.

At St. Luke’s Episcopal Church in Calistoga, there was an interfaith Community Thanksgiving Service with drinks and dessert two nights before Thanksgiving, to hear about people’s experiences through this ordeal. The Rev. Susan Napoliello, deacon at St. Luke’s, also attended a Thanksgiving feast the Saturday before the holiday, hosted by the Napa Interfaith Council. 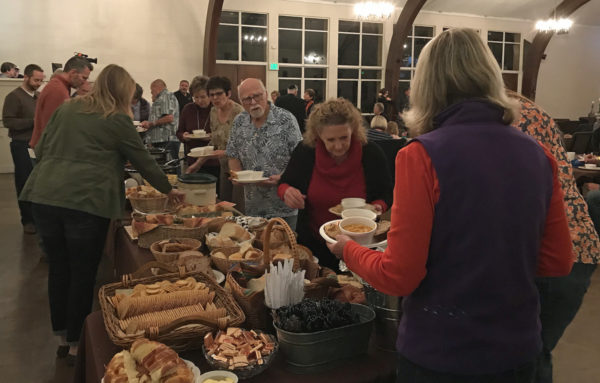 Whether they’re victims, volunteers or both, many are finding gratitude and focusing on Christ’s all-encompassing love this Thanksgiving weekend.

“We have to look at our blessings. You ask God for a directive and are inspired. You recognize the broadness of what you’re doing and move forward,” Charles Johnston told ENS. “I am fortunate. I have the ability to recover.”

A member of St. Luke’s, Johnston has been a wine grower and maker for 26 years before the fires destroyed his home and organic vineyards at Helena View Johnston Vineyards in Napa Valley. 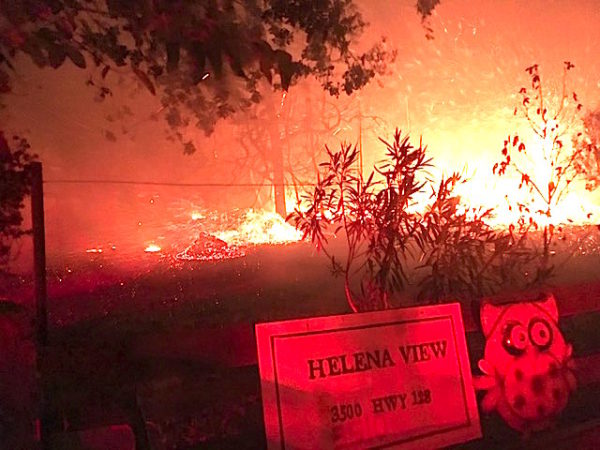 The wildfires that raged in Northern California in October destroyed lives and billions of dollars in property, including Charles Johnston’s Helena View Johnston Vineyards in Napa Valley. Photo courtesy of Charles Johnston

He also lost 30,000 bottles of red wine and 12,000 gallons of wine in barrels. Although Johnston has a separate home in the city of Calistoga, he, his wife and his youngest daughter had moved all their belongings into the vineyard home. After the fires, he had two pairs of pants and one pair of shoes, all that was left back at his Calistoga home.

The Diocese of Northern California gave him two $250 checks for Daisy, his 6-year-old daughter, to replenish her Roman Catholic school uniforms. “That’s amazing,” Johnston said, his voice cracking. “I’ve been on the donor end most of my life. For us, we’re the victims this time. It makes me cry.”

More than a month after the fires, several high school students from Los Altos in the Bay Area arrived at his vineyard to reseed his land with 30 pounds of organic fava beans. They’ll come back next spring to pick them and take them home.

Johnston, a delegate to the 2017 Northern California Diocesan Convention, made it to the gathering just days after the fires and shared how this experience has changed his spiritual perspective.

“God has given me the pleasure of having nothing to deal with that’s material. All the letters, personal things, every single photograph – everything is gone. I look to my spiritual roots and say well, maybe there is something bigger than this that I’m supposed to do,” Johnston explained for ENS. “It takes heart to make this happen, how we all come together for a common cause. It wakes up our minds.” 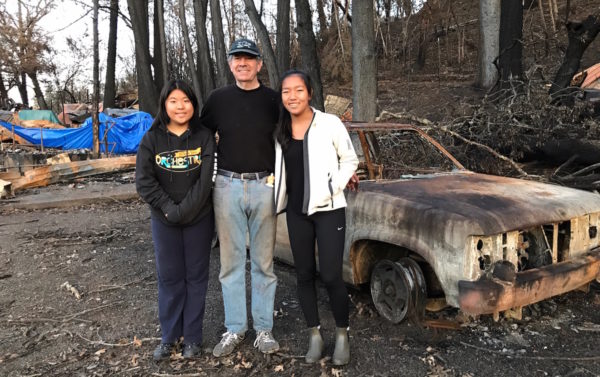 People are helping each other all sorts of ways with food.

Lori Korleski Richardson, interim communications director for the Diocese of Northern California, said the community-supported agriculture group to which she belongs, Farm Fresh to You, has been asking its members to buy an extra box to be donated through the Redwood Empire Food Bank in Sonoma. The food bank then donates another box to double the food going to fire victims. St. Andrew’s Mission in Monte Rio is one of the food bank’s partners. Located about 10 miles west of Santa Rosa, the mission’s food program provides groceries and hot meals to people in need. While that immediate area was affected mainly by smoke, many fire evacuees found temporary housing in the area and were served by St. Andrew’s worship and food pantry, said Leslie Benjamin, a lay leader in that worship community.

The Rev. Josephine “Phina” Borgeson, a non-parochial deacon of the Diocese of Northern California and food ministry networker from the Russian River Deanery, told a Nov. 18 gathering at St. Paul’s Episcopal Church in Healdsburg: “Food ministry is my thing. With this fire, this urban fire, there is so much that is unknown. What’s happening to our crops? I contacted the cooperative extension and UC Davis, and they said they had no research on toxins that are released during urban fires. Well, they should have plenty to work with soon; we’ve been doing lots of sampling in our watershed.”

Borgeson added in an interview with ENS that there is a sense that heroic crisis efforts did not always jibe with existing food-recovery efforts, such as gleaning and food rescue, as well as they might have. The Sonoma County Food Recovery Coalition has been working on an online directory to ensure that produce and other food donations find a good home in ordinary times.

“We hope we can make it even better by learning what worked in the recent crisis,” Borgeson told ENS in an email.

In the Interfaith Sustainable Food Collaborative October newsletter, founder Steve Schwartz wrote that the Sebastopol, California, organization’s mission is to work for food access, justice and sustainability, not necessarily emergency hunger relief. Yet, he wrote, “some of the same ‘infrastructure’ such as coolers, refrigerators, storage bins and shelving that are key during an emergency also position a congregation to do more with gleaning, greening the pantry with fresh vegetables and other food access projects during more normal times.”

Episcopal Community Services supports the development of community gardens, food pantries and feeding programs with mentoring, information-sharing and start-up grants, the Rev. Lucretia Jevne, president of the board of directors, told ENS by email. 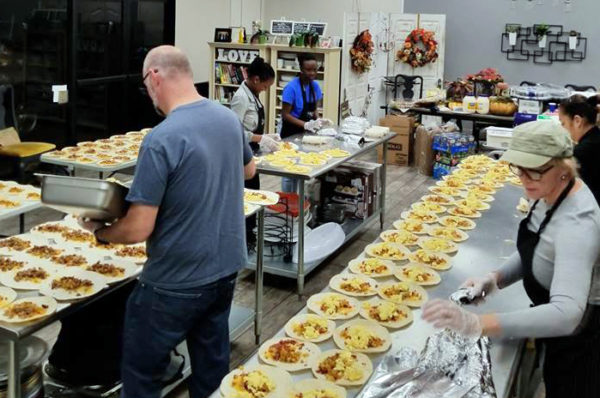 One of those feeding programs is Green’s Community Meal Program at Church of the Epiphany in Vacaville, which received a United Thank Offering grant and is a Jubilee Ministry Center. “This group stepped up at the time of the fires by providing meals and supplies to various shelters,” Jevne said.

Green and her fellow volunteers coordinated the delivery of tents to those who lost their homes that first night. She started tearing up as she recalled the choking smoke, the cats whose ears and whiskers had burned off, and the traumatized horses they fed and watered at the dilapidated stalls at Dixon May Fair, an evacuation site.

“It was one road away from burning the north end of our town. It was really scary,” Green said.

In a normal week, Green’s church kitchen prepares about 350 meals for the needy in the community. To accomplish this service, Green has a network of other Episcopal churches and churches of other religions, corporate food companies, local bakeries, and social services and government agencies. When the fires took over, that network enabled Green to quickly match the fire victims’ immediate needs with available resources.

“In this environment, it’s not just cup of soup we hand you and say move along; we care about you. It’s where two or three are gathered, you know? It’s crazy how transforming that dynamic becomes when you just let go and let God,” Green said. “When everybody chips in and does something as a team, it’s amazing what you can do; it’s like the loaves and fishes concept.”

The food has been aplenty.

At Church of the Incarnation in Santa Rosa, the Rev. James Richardson, the priest-in-charge, said they are still serving their Open Table Sunday breakfast and haven’t seen an upswing in guests for that program because of the fires. 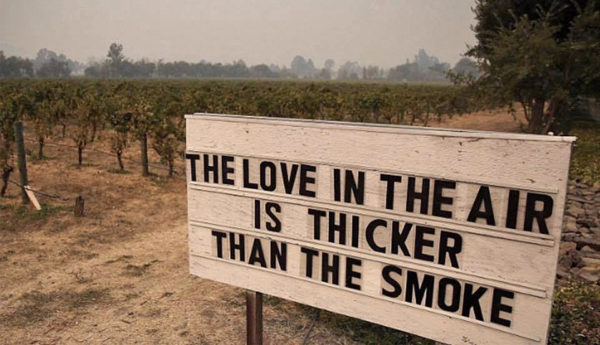 Northern California residents came together to help each other during the late October wildfires. Even if those fires are out of the headlines, the need and the love continue. Photo: Church of the Epiphany Community Response

“The food banks during the fires were turning away food donations because there was nowhere to put it,” Richardson told ENS. “We also have a CSA that delivers to people at the church, and the service has not been interrupted. We really don’t have a shortage of stuff.”

The bigger issue at the moment is finding people rentals to live in and helping people pay their rents, Richardson said.

The Ven. Gary Brown, archdeacon for diaconal ministries at Emmanuel Episcopal Church in Grass Valley, said some of his parishioners were evacuated from their communities. His rural town is in the Sierra Nevada foothills east of the major fires, although two smaller ones threatened them. A former psychiatric nurse for 40 years, Brown visited deacons in the harder-hit areas a month after the fires and listened to their experiences and emotions. Some were concerned about undocumented workers getting food and other necessities without land to work on.

“Just because the emergency is over, doesn’t mean it’s over for the people. It’s too easy to let that drop after the emergency services leave,” Brown said. “These folks have been very traumatized. What the church can do is provide people and places to listen to them. Just listen. Don’t ignore them.”

Those living far away can give to Episcopal Relief & Development’s U.S. Disaster Fund or to the Diocese of Northern California, via the options here.

“And pray,” Brown said. “There’s a lot of hurt and a lot of pain going on around here.”

— Amy Sowder is a special correspondent for the Episcopal News Service and a freelance writer and editor based in Brooklyn. She can be reached at amysowderepiscopalnews@gmail.com. Lori Korleski Richardson, interim communications director for the Diocese of Northern California, contributed to this story.