[Episcopal News Service – Healdsburg, California] Healdsburg, a quaint little town about 70 miles north of San Francisco, has been through a lot in the past six weeks: a massive fire that burned 36,807 acres came dangerously close to the Episcopal church, and several of its parishioners who live in outlying areas lost everything but their lives when they evacuated in the middle of the night.

But as the rector of St. Paul’s, the Rev. Sally Hubbell said: “We know how to feed people here.” So on the night of Nov. 18, about 60 people from St. Paul’s and its neighboring parish to the south, Incarnation, Santa Rosa, gathered to eat chili, slaw, cornbread and desserts. And once they had eaten and had a glass of wine – this is, after all, the heart of the Sonoma wine country – the stories began. 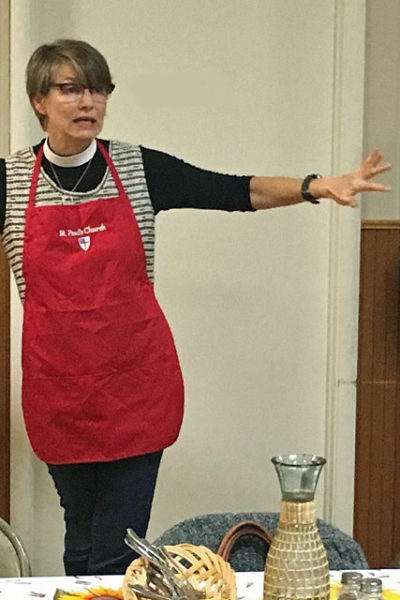 The Rev. Sally Hanes Hubbell gave directions for crowd flow before inviting everyone to serve themselves from two big pots of chili. Photograph: Lori Korleski Richardson

Hubbell started off the storytelling by saying she had hoped that she had left the dealing with wildfires behind her when she moved to Healdsburg from Colorado Springs in 2016. “Yet, even with everything I went through in Colorado, when it happened here, it was totally different.”

“We had less than four hours to evacuate, trying to figure out where people are, with no cellphone coverage, no Internet. … I went to the church thinking that I could at least use the landline. But I got there and no landline. I had no idea what was happening. Then I looked out the window and saw a guy in a North Carolina sweatshirt talking on his cellphone. He had AT&T and an East Coast number, so he was able to dial out. I followed him to his room, explained the situation and he let me use his phone, so I got a little info that way.”

She had to pack up the sacristy later that week when evacuations were ordered. “I took my BCP, my ordination certificate off the wall, the Body of Christ in the ciborium, the record books and the silver.” Luckily, the fire stopped short of downtown.

Hubbell choked up a bit as she said, “I was trying to be in a position of leadership, and it’s hard to be a leader when your flock, everyone, was so scattered.” She tried writing a sermon for that Sunday “but I really couldn’t envision how this would play out.”

Suzanne Kurtz said she got her car packed up as her husband, Richard, urged her to go ahead. “You just go and drive and stop where it feels safe.” She said she got to Petaluma and thought to call the deacon at St. Paul’s, the Rev. Mary Taggart. “Mary called (the Very Rev.) Daniel Green and he found a place for us to stay in Petaluma. We got back home a few days later and everything was fine.”

One man said he “smelled smoke at 2, got out at 2:30 and by 5:30 a.m. our house was gone.” He shook his head sadly, shrugged, but managed a little smile as he continued: “The love I’ve felt from this congregation … I can’t thank you enough for that.”

Colleen Carmichael, executive director of Reach for Home, said, “Trying to find housing for our clients before the fire was hard, and now it’s even harder.” But she did have good news: The two houses she was trying to secure in Cloverdale in early October were approved for loans, and a $75,000 grant she had applied for in the first part of the year came through as well. “It was as if God said, ‘OK, you got two, let’s make it three.’ ” She has put an offer in on a house in Windsor. “Now the real work of helping people begins,” she said, ticking off fundraising projects such as a dance marathon that raised $5,000 the previous weekend. 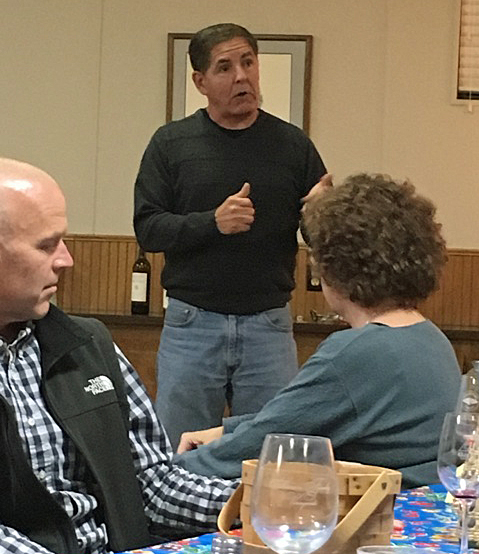 Randy Collins talked of what steps everyone who lives near fire danger should take. Photo: Lori Korleski Richardson

Senior Warden Linda Maxwell said she felt helpless since she was up in Lake Tahoe when the fires broke out, but she started calling everyone she could think of. “Nobody said they needed anything, but later they told me it meant the world to them that someone called. Because,” she said with deep emotion, “we’re family here at St. Paul’s. We may not be biologically related, but we’re spiritually related, here,” touching her heart.

Randy Collins, who has spent his life fighting fires and leading fire-safety efforts in Northern California, reminded the crowd that its family in disasters is vast. “You have a huge family out there that extends across the state. Many people have experienced wildfires in this state, and they are ready to help,” he assured them. He urged those who still had dead trees on their property to remove them and to follow the “Ready, Set, Go! Program.”

“History repeats itself,” he said, reminding the group that the year after the Hanley fire in 1964, the grass grew back and burned again, much like the cycle so familiar in Southern California. 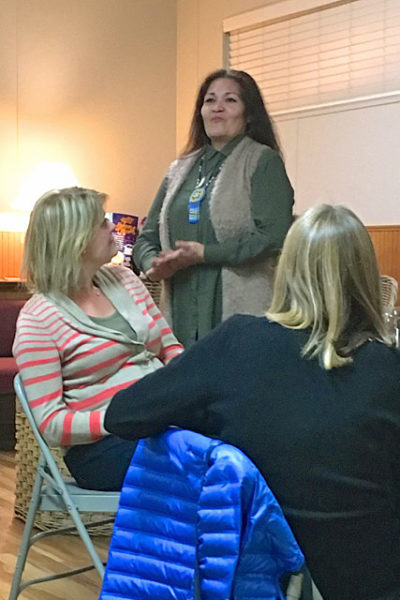 “You get too many people on her back, the Earth shrugs and moves on,” said Betty Banda, who is standing. Photo: Lori Korleski Richardson

Betty Banda, who grew up in the hills outside Geyersville, a little community north of Healdsburg, remembers many close calls and hurried trips down the mountains when fires would threaten, but she says she takes them all in stride. “I’ve always thought of it as nature,” said the Apache Nation woman. “You get too many people on her back, the Earth shrugs and moves on.”

After those who could manage to talk about what they had been through had their say, they hugged many more who could not, or not yet. The crowd looked forward to the confirmations of several youth and adults from both congregations in the morning, so they brought their empty bowls and glasses to the kitchen, and with many hugs and good wishes said goodnight.

– Lori Korleski Richardson is the interim communications director for the Diocese of Northern California.