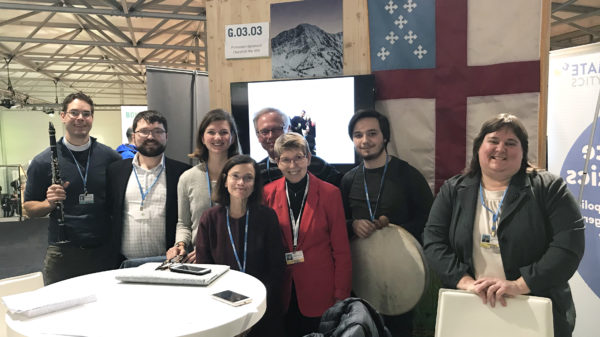 The Nov. 6-17 conference, officially known as the 23rd Conference of the Parties to the United Nations Framework Convention on Climate Change, or COP23, was an annual intergovernmental meeting to focus on global dialogue and action. The Episcopal Church, granted observer status, sent about a dozen Episcopalians to continue the church’s advocacy that began at the previous two conferences.

“The Episcopal Church, through the presiding bishop’s delegation, is taking a very strong presence in the life of these climate summits,” Diocese of California Bishop Marc Andrus told Episcopal News Service after returning from COP23. “We’re making strong networks in the faith communities.”

Andrus and his wife, Sheila Andrus, spent the full two weeks in Bonn, while two groups of Episcopalians alternated in participating in the first week and then the second week. They led daily worship services, maintained a booth with information on the church’s environmental advocacy and, on a more limited basis, were able as observers to enter the U.N. zone where the intergovernmental negotiations were occurring. 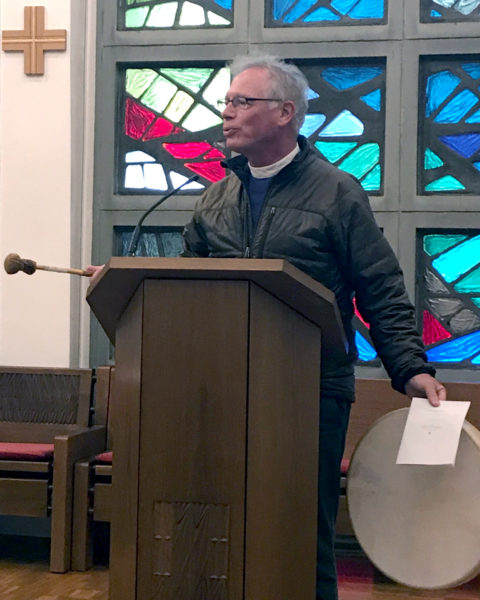 Diocese of California Bishop Marc Andrus helps lead an opening chant at an interfaith prayer service in Bonn, Germany, before delivering a statement titled “Walk Gently on the Earth” to the COP23 leadership. Photo courtesy of Marc Andrus

“I’m very, very grateful to Presiding Bishop [Michael] Curry for trusting us, this delegation, with this work that I consider so vital, and it’s a great honor to serve,” Andrus said. “Our church is responding in an important and beautiful way.”

The Episcopal Church has made environmental justice one of its three priorities, in addition to racial reconciliation and evangelism, and General Convention has passed numerous resolutions on the issue, whether supporting federal climate action or pledging to mitigating the church’s own impact on the environment. A 2015 resolution created the Advisory Council on the Stewardship of Creation to support “ecologically responsible stewardship of church-related properties and buildings.”

Through its Office of Governmental Relations and the Episcopal Public Policy Network, the church has advocated for government policies in line with General Convention stances on climate change, and the House of Bishops made environmental justice one of the themes of its September meeting in Alaska.

An Episcopal group was in Paris, France, in December 2015 to make a spiritual case for climate action during COP21. At that conference, member countries, including the United States, reached a landmark agreement to set voluntary goals aimed at keeping global warming well below 2 degrees Celsius, which scientists think would be necessary to prevent a spiraling catastrophe of melting glaciers, rising sea levels and related weather extremes.

The COP23 summit was intended to build on the Paris agreement, but the agreement’s effectiveness was thrown into doubt this year when President Donald Trump said he would withdraw from the accord rather than hold the U.S. to its pledge to dramatically reduce its greenhouse gas emissions.

“We remain open to the possibility of rejoining at a later date under terms more favorable to the American people,” U.S. diplomat Judith Garber said last week at COP23.

The Trump administration’s noncommittal stance loomed over COP23, where negotiators began drafting the rules for how the member countries will be expected to report their emissions reductions. Final approval of that framework could come when the next U.N. conference is held in Poland.

“If the United States does not keep its commitment, that’s a very poor predictor of the success of the Paris agreement,” Andrus said.

He and the rest of the Episcopal delegation were encouraged by the presence in Bonn of what has been called the “We’re Still In” movement. While the Trump administration participated in the U.N.’s intergovernmental negotiations, an alternate, unofficial American delegation in Bonn included U.S. lawmakers and leaders of states and cities, as well as business and faith leaders. They vowed to live up to the United States’ Paris agreement commitments – thus the label “We’re Still In” – even if the federal government won’t.

“The end result of this COP23 is being seen as a rather positive and fruitful outcome, all things considered,” Lynnaia Main, the Episcopal Church’s representative to the U.N., said in an email to ENS after attending part of the conference. “Member states demonstrated unparalleled commitment to the Paris agreement, although there is an urgent need to increase their level of ambition.”

The plight of various Pacific island nations was a recurring theme at COP23, due to the direct effect that rising ocean levels will have on their ability to survive. Main said the prime minister of Tuvalu had warned that his country would be submerged by 2030 if nothing is done to limit or reverse climate change.

Those low-lying countries’ request for an increase in financial assistance, however, was not approved, Andrus said. The result could be dire.

“They are losing their lives. Samoa, for instance, has been inhabited for about 3,000 years, and this is their home and it’s deeply threatened by rising water levels,” he said. “This is not distant future or even near future. This is happening.”

What could a small group of Episcopalians hope to contribute in a place like Bonn? At COP23, Andrus said the church and other faith communities were welcomed by participants and visitors who were eager to ground their activism in shared values.

People of faith are climate activists, Andrus said. “Our spiritual values are the basis from which we act.”