[Episcopal News Service] The two historically black colleges with longtime ties to the Episcopal Church have significant economic impacts on their communities and on the lives of their graduates, according to a study released this week that quantifies the impact of a hundred such institutions in the country.

Saint Augustine’s University generates $72 million in annual economic activity in and around Raleigh, North Carolina, while Voorhees College in Denmark, South Carolina, generates $17 million in economic impact, according to the study from United Negro College Fund, or UNCF.

Those two Episcopal-affiliated institutions and other historically black colleges and universities, also referred to as HBCUs, combine to generate an annual economic impact of $14.8 billion, the equivalent of a top 200 ranking in the Fortune 500, according to the report, titled “HBCUs Make America Strong: The Positive Economic Impact of Historically Black Colleges and Universities.” 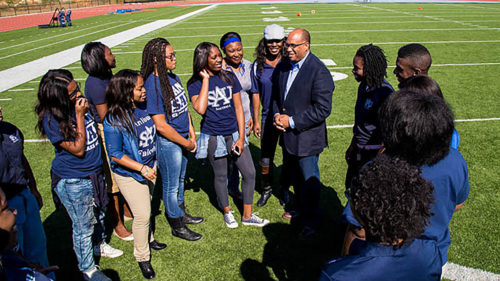 “Not only are each of our institutions strong as far as educational vehicles for American society, but also, to look at it from an economic impact … these are universities that have tremendous impact,” Everett Ward, president of Saint Augustine’s, said in a phone interview with Episcopal News Service.

The report defines economic impact as “direct spending by HBCUs on faculty, employees, academic programs and operations and by students attending the institutions, as well as the follow-on effects of that spending.”

UNCF also collected data on jobs produced by the colleges and the estimated lifetime earnings of the colleges’ graduates.

“The economic benefits of HBCUs extend to more than just the students themselves,” UNCF President Michael Lomax said in the study’s summary. “They’re equally important to the communities, and the regions, that HBCUs have served for more than 100 years.”

Historically black colleges and universities were founded in the post-Civil War period to provide educational opportunities to black men and women who were excluded from white institutions of higher learning because of segregation. The Episcopal Church at one point supported 11 HBCUs in Louisiana, Mississippi, North Carolina, South Carolina, Tennessee, Texas and Virginia.

The Episcopal Church’s financial support of those two schools continues today. General Convention approved $2 million for the two schools in its 2016-2018 budget, including $400,000 in long-term development grants. Separately, the church’s Development Office is working to increase awareness of the schools within the church and to help with fundraising.

The UNCF report is based on 2014 data, which showed all HBCUs generated 134,000 jobs and more than 50,000 graduates that year who could expect to earn a combined total of $130 billion in their lifetimes.

Voorhees was found to generate 287 jobs, including 196 on campus and 91 off campus. The lifetime earnings for its 117 graduates in 2014 were estimated at $297 million.

The study also concluded that those earnings estimates represented 77 percent more than what the graduates would have earned without college degrees, or about $1.1 million more per graduate.

Fact sheets on each of the 100 HBCUs are available on the UNCF website.

The scope of the study was limited to the direct economic impact of the colleges and universities, which paints a positive picture but doesn’t tell the full story, the website HBCU Digest said in an analysis. “So much vital data about HBCU value is absent,” the website says, citing the additional economic value of the institutions’ athletics, social events, volunteerism, capital projects and philanthropy.

Ward, Saint Augustine’s president, acknowledged the study could have incorporated more data but said it was well done. “This study can grow in future years as they begin to widen their scope and look at other indicators,” he said.

One key metric from his perspective is the 65 percent of Saint Augustine’s 974 students who come from North Carolina, many of whom are expected to remain in the state after graduation and contribute to the local economy.

Ward sees the UNCF study released this week as a valuable tool for showing the impact of his and other colleges.

“We plan to share it with the business community here,” he said. “We are sharing it with community stakeholders so that the larger community understands the impact that the university has.”