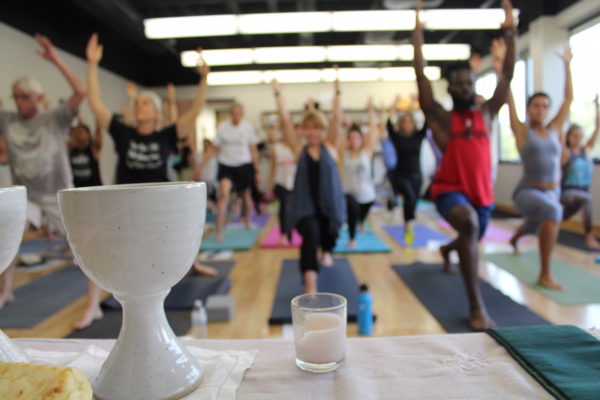 Yoga students learn the crescent pose, as well as receive the Eucharist at YogaMass, an idea created by the Rev. Gena Davis and run with Rev. John K. Graham, in Houston, Texas, and beyond. Photo: Jonathan Dow/YogaMass

[Episcopal News Service] Something happened when the Rev. Gena Davis balanced on one leg for tree pose and reached her arms skyward while squatting for chair pose in yoga class. Something transformational.

“It starts as a physical practice, and it can move into a spiritual practice. And that’s when the real question comes: What is this, and how can I make sense of this as a priest?” said Davis, who was vicar of Grace Episcopal Church in Houston, Texas, at the time. She did her yoga teacher training then, too.

“In church, some people feel they’re worshipping in their head. This is a way to bring the body into worship. We totally recognize the mind-body-spirit connection. They’re integrated. It’s really a movement toward wholeness.”

Many Episcopalians are recognizing that Christians and other spiritual seekers often need a more holistic approach to practicing their faith, fellowship and worship.

Fitness is one way. Faith and fitness can go hand in hand in many types of exercise, be it mediating while running, taking a boot camp class or practicing yoga.

Davis’ personal yoga practice inspired her to co-create YogaMass, which incorporates the Eucharist. Partnering with the Rev. John K. Graham, president and CEO of the Institute for Spirituality and Health at the Texas Medical Center and interim priest at Grace Church, Davis received approval from Diocese of Texas Bishop Andy Doyle to create a liturgy for YogaMass. The yoga worship services began in January 2016.

Davis leads the yoga flow; she and Graham take turns sharing the gospel; they both celebrate Eucharist; and sometimes they have someone else lead the meditation portion. While the ritual and practice started at Grace Church, they now move to different locations throughout Houston, and have plans for spots in California. Davis wants to share this experience with as many people in as many places as possible. 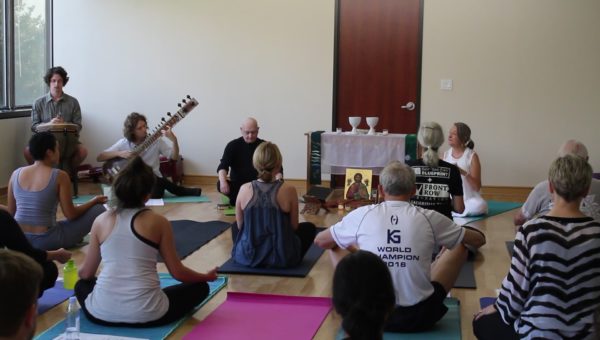 (Left to right) Cyrus Wirls on djembe drum and Stuart Nelson on sitar play music while the Rev. John K. Graham and the Rev. Gena Davis lead the class up front near the altar during YogaMass. Davis started the program in 2016 at Grace Episcopal Church in Houston, Texas, and now takes it across the area, as well as California, to spread awareness of its fusion of ancient yoga practices and Christian principles. Davis and others provide classes that also act as a worship and meditation service. Photo: Jonathan Dow/YogaMass

She wrote a book, “YogaMass: Embodying Christ Consciousness,” published by Balboa Press in April, detailing how yoga’s ancient principles are complementary with Christian values. The book’s first line, “This is my body,” is what Davis says every time she celebrates the Eucharist.

“As Episcopalians, we know those are the words Jesus spoke on his last night. Those are Eucharistic words. Those are our words as faithful Christians, and to bring it home and say it yourself, that brings up all sorts of possibility for exploration,” Davis said. “I think that’s too powerful to pass up. We can’t ignore the body. It’s our way of experiencing life.”

Practicing yoga has opened up Christianity for Davis. It’s a perspective that’s deepened her faith. The practice can broaden the boundaries as well. People in their 20s have told her they’re not comfortable in traditional church settings, but they still want to worship. YogaMass is their answer.

“There’s this huge fitness craze out there. I see people get on their mats and feel so good, but what they’re longing for is that connection with other people, and the Divine, and that’s God. Sometimes they can’t name that,” Davis said.

Drawing people from the community who might not otherwise go to church is a big motivator for churches to host fitness classes.

“Big churches in the baby-boomer generation saw their fitness centers as a type of YMCA, a tremendous outreach,” said the Rev. Hillary Raining, who teaches yoga at St. Christopher’s Episcopal Church in Gladwyne, Pennsylvania. “Taking care of your body is a Christian value. Paul tells us our body is a temple of the Holy Spirit; and I don’t think you’d leave your church temple in disarray.”

It’s basically a free gym operated with Christian values that is located behind the church, to which it is connected by a covered driveway. The center is available for everyone to use, as long as they follow the rules of conduct, said Marietta Haaga, director of recreation. Of course, donations are accepted.

Parishioners raised the money to build the center in 1999, as a recreation outreach ministry. Some instructors start off their classes with prayer. “Keeping people on track, physically, mentally and spiritually is what we’re about,” said Haaga, who is also a personal trainer. “Really, our philosophy and ministry is to make sure people stay healthy in mind, soul and body.”

Providing a place for people to exercise in a good, clean, safe and Christian environment accomplishes that goal. Sometimes people tell Haaga they went to a church service because they heard about it at the Parish Life Center. The center also offers speakers, health fairs and blood drives.

You don’t have to tell Paige Lollis that faith and fitness can be intertwined. She was the catalyst of such a combination at her church, St. Philip’s Episcopal Church in Frisco, Texas. It began when Lollis took Pilates with Christi Price, a certified instructor and fellow woman of faith. They transformed their private Pilates session into a worship workout, incorporating faith-based music and scripture. 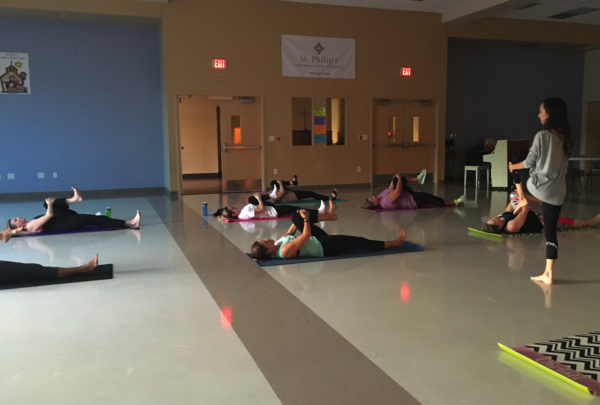 Lollis liked it so much, she talked to Kelley Prahl, then the church’s director of adult discipleship. They started offering six-class sessions of Pilates every season. Bible verses are read and Christian music is played in each class. This past season, they added Holy Yoga taught by Maureen Beville, an instructor certified in the gospel-centered yoga with its own training certification.

Class fees range from $10 to $15, and a portion of proceeds go to a charitable organization, most recently, the Redeemed Women ministry.

Stevi McCoy, the church’s director of community life, loves taking the Pilates class. “This is another way to worship; we’re trying to offer the biggest selection of ways to worship and fellowship and grow as disciples,” McCoy said.

“I feel like any other kind of exercise classes focuses on you; in these classes, you focus on God. That’s the biggest difference. You have thanksgiving for your life.”

In Gladwyne, Raining teaches an ancient type of yoga called ashtanga at her Pennsylvania church. The free classes are twice a week and available to all members of the community. She starts class with a meditation that blends Christian and yoga principles, gives a mini sermon, instructs students in their yoga poses and closes with a meditation.

“What I found in yoga is a beautiful blend of inward change that has an outward catalyst,” Raining said. 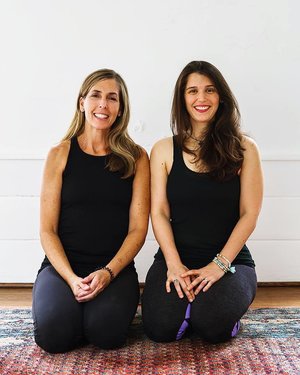 Other kinds of exercise can be meditative too. The priest loves to run and hike. She usually listens to music, but she can decide to spend 10 minutes of that time as a meditation by setting the playlist to hymns. As a Lenten discipline, she once fasted from listening to music while running and listened to the silence instead.

“Yoga has the advantage because it’s built into the aura of the practice. But any fitness practice done with intention can bring you closer to God,” Raining said.

With fellow yoga instructor and spiritual leader Amy Dolan, Raining is writing a book, “Faith with a Twist: A 30 Day Yoga Journey,” which she hopes to offer at the 79th General Convention in July in Austin, Texas. She’s also in the process of building a women’s spiritual and wellness website, called The Hive.

You don’t have to be scared that you’re following Buddhism or Hinduism when practicing yoga, these Christian yoga teachers say. The parallels are a natural fit. For example, yoga’s drishti technique uses a specific gazing direction for the eyes to control attention, according to Yoga Journal.

It’s a Sanskrit term for your focal gazing point, which helps you concentrate, stay balanced and go deeper into the posture.

“If your eyes are on something moving, you will fall down,” Raining said. “I think that’s a really Christian thing to think too: Whatever you’re keeping your gaze on that’s true and holy, not the temptations and distractions, when your gaze is focused on Christ, that’s where you’re heading. I can practice it on my mat, and I can practice it in my life.”