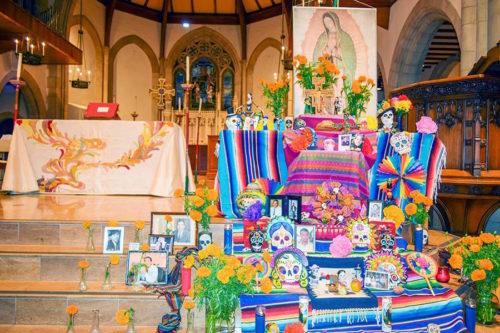 [Episcopal News Service] At the start of November, Carlos Carrillo thinks of his ancestors, deceased family members and his partner of 18 years, Rodney Goodwin, who died four years ago. It’s a Mexican cultural tradition, as well as a Christian rite, to remember and honor loved ones, while many of us simply go trick-or-treating with our kids for Halloween or ignore the hoopla.

Carrillo has organized a colorful, joyful commemoration of the Day of Saints and Faithful Departed on Nov. 2, the day following All Saints’ Day, for the last 12 years at All Saints Episcopal Church in Pasadena, California.

A couple hours before the traditional Episcopal All Saints’ liturgy, people bring photos and mementos of their loved ones, as well as the food, wine, tequila and music they liked, and place them at the church’s altar. A singing musical group that performs traditional Spanish music.

“People want to participate, no matter what culture they come from, to honor their loved ones. We ask the congregation during the homily to go very deep and very personal,” Carrillo said. “It’s become something of a cultural bridge to bring our entire church together. More and more, it’s becoming the norm to make space for untraditional services, especially Mexican-American services.”

Episcopal churches handle this time of year in different ways, from spooky storytelling and safe trick-or-treating events to themed liturgies and harvest festivals. All of it is family friendly. No truly scary monsters here. 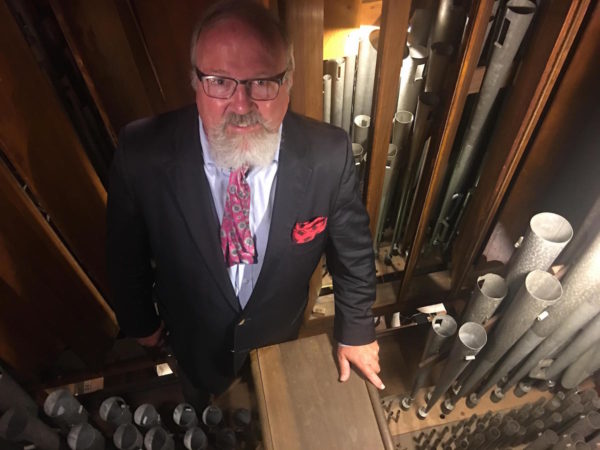 Silent film organist Peter Krasinski stands inside the pipe chamber of the 1894 Hook & Hastings organ at the Church of Saint John the Evangelist in Newport, Rhode Island. Photo: Peter Berton

Halloween and the commemorations that come the two days afterward — such as All Saints’ Day, Faithful Departed and the Hispanic Day of the Dead — have a mix of pagan and Christian roots.

The ancient Celts celebrated the Samhain (pronounced sah-win) festival on Nov. 1. The Gaelic festival marked the end of harvest season and the start of winter, or the darker half of the year. Today’s Halloween traditions of carving pumpkins and bobbing for apples originated from this pagan festival.

The night before the festival, they believed the dead returned as ghosts. “They would leave food and wine on their doorsteps to keep roaming spirits at bay,” according to the History Channel, “and wear masks when they leave the house so they’d be mistaken for fellow ghosts.”

Samhain traditions were blended into the Christian Church’s All Saints’ Day, or All Hallows’ Day, as culture evolved in the eighth century. The night before became All Hallows’ Eve, later shortened to Halloween.

In 2001, the Rev. Charles T.A. Flood provided his version of one of many prayers for Episcopalians on All Saints’ Day. It begins: “We remember the saints in the security of our hearts, those whom we have carried within us since childhood, those with whom we speak in the dark moments of cold and loneliness and those who give us, by their example, the courage to go forth and prevail.”

The Episcopal Church also offers an All Hallows’ Eve liturgy in its Book of Occasional Services.

At Christ Church Cathedral in Houston, Texas, there’s a Boo Bash for congregation members, as well as downtown neighbors, who often have nowhere to trick-or-treat. This year, the welcoming and evangelizing event is Oct. 27. Cathedral organist Daryl Robinson will offer a “haunting” postlude after a brief All Hallows’ Eve prayer service. Children get the rare opportunity to look at the organ console up close while Robinson plays seasonal favorites such as “Thriller” and “The Addams Family” theme song. Yellow caution tape and a sign saying “Please don’t feed the organist” are light-hearted ways to keep kids from disturbing the impressive instrument, said KariAnn Lessner, one of the Boo Bash organizers. 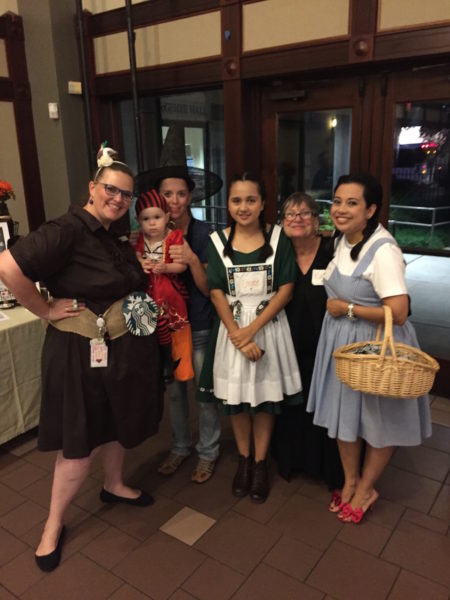 Children are encouraged to wear nonviolent, non-scary costumes and trick-or-treat in Reynolds Hall at stations hosted by cathedral members. In the event’s previous two years, more than 100 families arrived dressed up as characters from “Batman,” “The Incredibles” and “Alice in Wonderland.” A scavenger hunt, food and games are part of the fun.

“I think God just delights in the fact that kids can have fun in his house,” Lessner said. “It feels very much like a neighborhood, very much like family, and I feel little bit of awe. It’s really kinda epic.”

For the first time at the Cathedral of the Incarnation in Garden City, New York, there will be an All Hallows’ Eve liturgy and tour on the day itself, Oct. 31. The event will tell the story of the cathedral’s founders, A. T. and Cornelia Stewart.

The cathedral was built with the sole funding of Cornelia Stewart as a mausoleum for her husband, who was the founder of Garden City, Kris Vieira, assistant to the dean of the cathedral, said by email. While the building was being constructed, his body was temporarily placed in the cemetery at St. Mark’s Church in-the-Bowery in New York City.

Then his body was stolen by grave robbers and held for ransom.

For the “haunted” tour, volunteers in Victorian-era costumes will re-enact the funeral service with a borrowed casket from a local funeral home. Guests will walk through the imaginary graveyard with A. T. Stewart’s temporary grave and witness the grave robbery. The tour ends in the crypt where A. T. and Cornelia are buried. Then begins the All Hallows’ Eve liturgy from the Book of Occasional Services, featuring the biblical readings of the Witch of Endor and the Valley of Dry Bones.

“We think it’s a great way to keep the ‘spirit’ of the day and engage in the unique history of our cathedral. At the same time, it’s a way to get people to church on a day that has become completely secularized,” Vieira said by email. 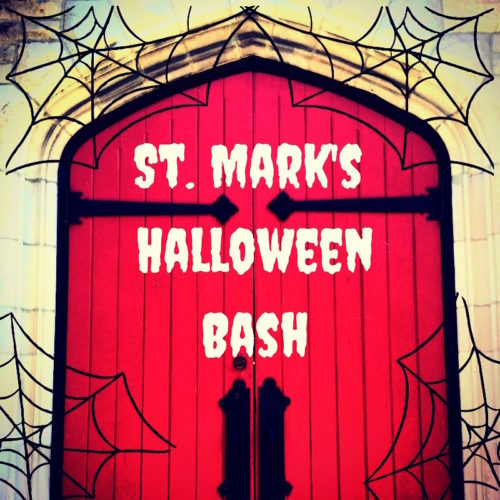 Aside from the special Faithful Departed service in Pasadena, All Saints Church has separate Spanish-speaking services every week in addition to the English-speaking ones. Carrillo has been a leader on the Hispanic/Latino committee and immigration task force, trying to make transplants from Mexico and other cultures feel welcome.

At the Nov. 2 celebration, people are encouraged to stand up and tell a story of their loved ones. At the end of the service, everyone has a chance to call out their loved ones’ names, and then the rest of the congregation says “Presente!” to acknowledge their presence.

“It helps me remember him, remember his smile, remember how good he was, not only to me but to everyone he met,” Carrillo said about Goodwin. “It’s a feeling of joy when I see his picture on the altar. When I call his name and everyone yells ‘presente,’ I feel happy.

“It gives me chills … and I see other people crying because they’re happy.”

Check out what a few other Episcopal churches across the United States are doing for their celebrations: