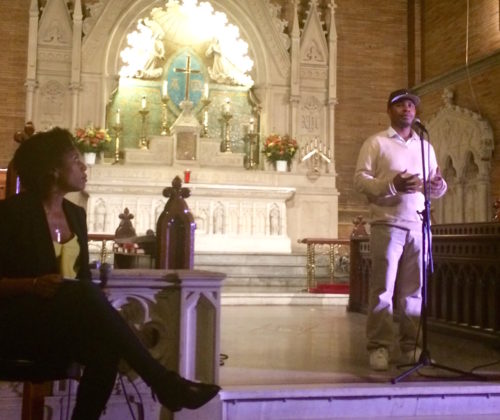 Rahson Johnson (right), a member of the Circles of Support advisory board, spoke to the crowd as moderator Dawn Jewel Fraser (left) listened at the Fit the Description interactive film series and discussion Oct. 24, at St. Philip’s Episcopal Church in Harlem, a neighborhood in the New York City borough of Manhattan. Photo: Amy Sowder/Episcopal News Service

[Episcopal News Service] Rahson Johnson stood behind the microphone, in front of the ornate altar at St. Philip’s Episcopal Church in Harlem, the northern Manhattan neighborhood in New York City. He looked at more than 200 people filling the pews on the evening of Oct. 24, recalling two critical moments as a 16-year-old growing up in Brooklyn’s Bedford-Stuyvesant neighborhood.

The first critical moment: His friends told him to get the gun from his apartment.

He did, and they played around, doing nothing, really. The police came by. On instinct, Johnson ran, so he was chased. He tossed the gun in a flower pot and continued running. Police tackled him, beat him up and arrested him, telling him he was no good, even though he turned out not to be the suspect they were looking for.

Regardless of his noncriminal past, Johnson fit the description.

Attendees heard and offered all sorts of perspectives at the evening’s #KnowJusticeHarlem, a film and interactive discussion brought by the Fit the Description series organized by the Circles of Support Advisory board, which is comprised of formerly incarcerated people, including Johnson. Circles of Support is a local Harlem re-entry partnership that cultivates leadership among the formerly incarcerated, their families and faith leaders to strengthen communities.

The second critical moment Johnson recalled at the event was the day he returned from a harrowing seven days at Rikers Island prison complex. Those same neighborhood kids put another gun in his hand. What did he do? Johnson took it. Not long afterward, Johnson was jailed again, this time for 23 years, on armed robbery charges.

Maybe if there were more support for people re-entering society after their prison release, Johnson’s repeated criminal activity might not have happened. Maybe if the relationships, procedure and accountability between police of any color and black men, in particular, were better, then the first incident wouldn’t have happened, or the situation wouldn’t have escalated to the point of arrest.

These points were worth a deep-dive conversation.

“Think of the ways people have assumed you have fit the description, and think of the ways you fit others into a description,” discussion moderator Dawn Jewel Fraser told the crowd. Later, she said, “We realize this conversation is only a first step.” 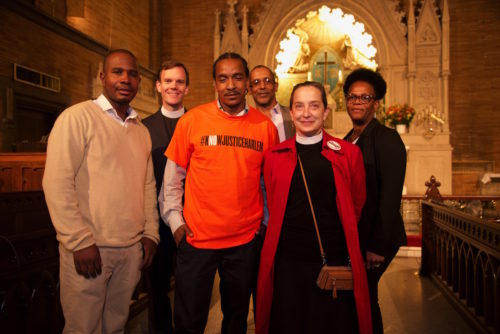 Many of the children and adults who attended the event have been directly impacted by the criminal justice system and mass incarceration. Several of the men from the film were there to speak to the gathering. In the film, eight men — four black police officers and four black civilians from New York City — met for the first time, face to face, to talk about the relationship between police and black men, sharing stories of their experiences, their feelings and the motivations behind their actions.

Many Episcopal churches are engaged in re-entry programs in which the mentors and mentees serve and change each other for the better, she said. Also, the Episcopal Church is about to put together an advisory group on criminal justice ministries to help more churches figure out how to engage in these efforts.

“This is not only a chance to talk about Beloved Community, but to act on it,” Spellers said. “Unfortunately, our church has benefitted so much from systems of injustice and oppression. We have a special responsibility to dismantle those systems of privilege.” 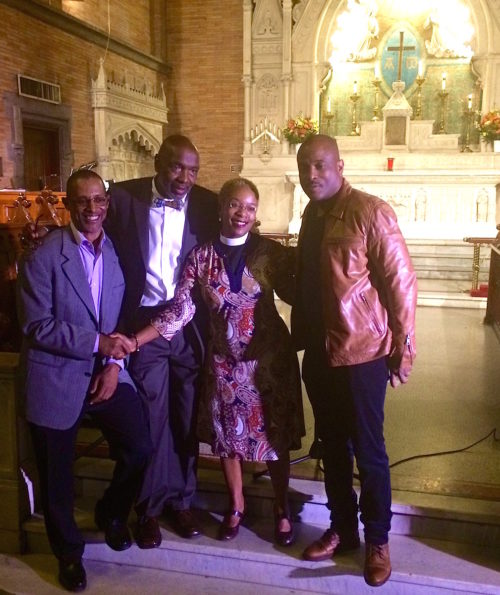 The Oct. 24 program also received support from the J.C. Flowers Foundation, Episcopal Charities of New York and a network of seven Episcopal churches in Manhattan committed to the kind of criminal justice reform that’s rooted in the lived realities of actual people with the highest amounts of police contact. The J.C. Flowers Foundation works with a wide range of partners to solve critical health and social problems affecting hard-to-reach communities. The foundation looks for communities often overlooked by traditional donors.

Founded by Episcopalians Anne and Chris Flowers, the organization was born after they saw the malaria epidemic up close on a trip to Africa in 2004 and then started the highly successful Nets for Life program, said Susan Lassen, the foundation’s executive director. The Flowerses used the same model to involve churches and communities in Harlem, training people and allowing them to do the work to help themselves. “It’s a unique way of looking at sustainable change,” Lassen said. 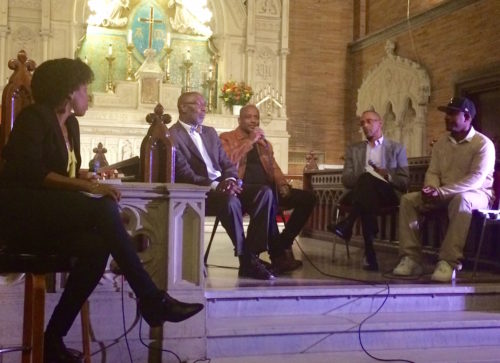 Change happens on a church-by-church basis.

St. Philip’s Church has been working on improving post-incarceration re-entry from a number of different angles, said the Rev. Chloe Breyer, associate priest at St. Philip’s, as well as executive director of the Interfaith Center of New York.

For example, volunteers from St. Philip’s provide drinks, snacks and “cheerful conversation” for people checking in with their parole officers at the Harlem Community Justice Center. Parolees often have to wait for hours before seeing an officer. Missing parole is a common reason men get sent back to prison, and men 18 to 35 years old are at the highest risk of becoming repeat offenders, Breyer said.

“Our pastors can be a listening ear and offer spiritual support, but not from a sectarian point of view,” Breyer said. She pointed to an evaluation of the Harlem center’s Reentry Court, which revealed a 19 percent reduction in re-convictions among participants three years following their release from prison.

Also in Harlem, St. Mary’s Episcopal Church Manhattanville hosts support network meetings for formerly imprisoned people, offering resources for those who have no place to live, no food or no medicine, as well as community gardening and movie nights. The congregation has members who were formerly incarcerated.

“There’s a need in the community to get support right after they get out of prison,” said the Rev. Mary Foulke, rector of St. Mary’s. “The cards are stacked against them, and we as a church can help make things easier for them.”