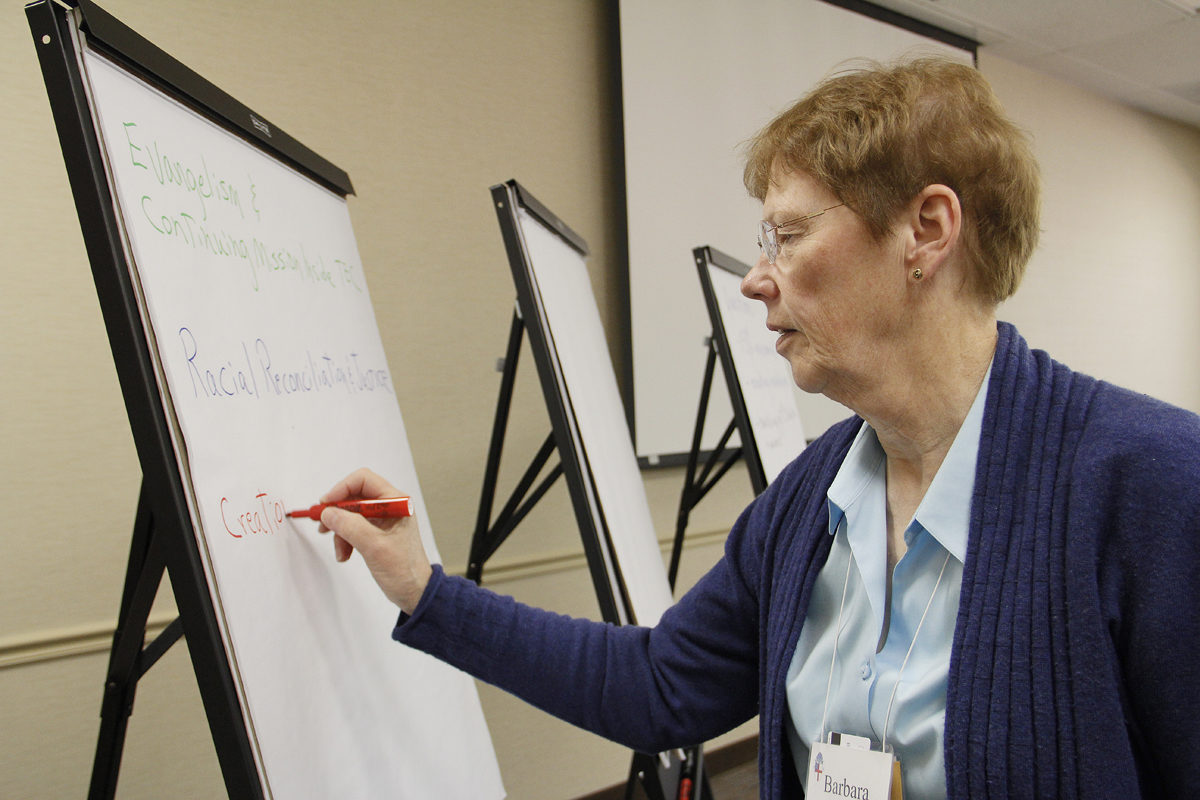 Barbara Miles, chair of the General Convention’s Joint Standing Committee on Program, Budget and Finance, makes a list of the subcommittees into which the members split up to drill down into the 2019-21 budget. Photo: Mary Frances Schjonberg/ Episcopal News Service

[Episcopal News Service – Linthicum Heights, Maryland] The Episcopal Church’s Joint Standing Committee on Program, Budget and Finance, or PB&F, has begun its share of the many months of work that will result in a 2019-21 budget being proposed to the 79th General Convention in July 2018.

PB&F members spent the bulk of their Oct. 21-23 meeting at the Maritime Institute Conference Center getting a crash course on the church’s finances, the current shape of the “working draft budget” being crafted by the Executive Council and the challenges both the council and committee face to produce a canonically required balanced budget for convention’s consideration.

There is an $8 million deficit in the current working draft, the Rev. Mally Lloyd, a member of council’s Joint Standing Committee on Finances for Mission, or FFM, told PB&F. The gap between anticipated revenue and the spending asked for by the churchwide staff and council’s joint standing committees stood at just more than $12 million when FFM began its work at council’s Oct. 18-21 meeting.

The version of Executive Council’s working draft budget that PB&F studied during their meeting is far, far from final. 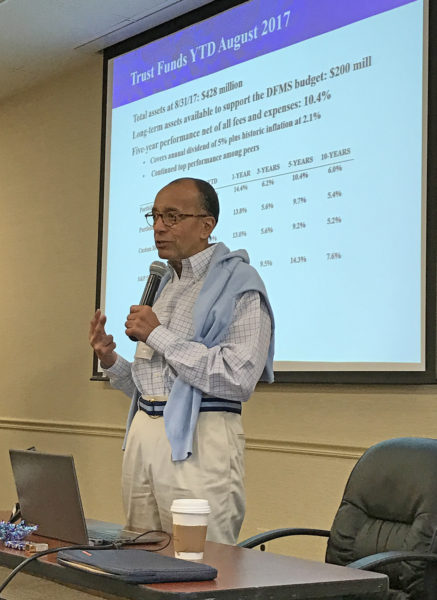 Council’s Finances for Mission committee crafts a draft budget for the entire council to approve and forward to PB&F, which General Convention charges with crafting a further-refined budget to propose to bishops and deputies. That draft budget hand-off must happen by early February 2018.

Lloyd, who is also a PB&F member, told the committee Oct. 22 that council’s goal is to produce a balanced draft budget but, she noted, council is not required to do so. Lloyd said she and FFM chair Tess Judge are confident that they can “get it under control and into balance.”

“But there may be some hurt in doing that,” she said, adding that “there’s so much good ministry going on that whatever’s left is going to be really top-notch.”

Both Presiding Bishop Michael Curry and House of Deputies President the Rev. Gay Clark Jennings during its opening session the evening of Oct. 21 thanked the committee ahead of time for its willingness to, in Jennings words, “wrestle with a budget that has big dreams and limited resources, and which we are agreeing to trust one another more than perhaps we have in many decades.”

Jennings said the committee faces such questions as whether “our modest expectation for increased income [will] be able to fund our vastly increased hope for mission and ministry across the church and far beyond” and what it will cost “in other areas of ministry to follow what we believe God is calling the Episcopal Church to be in today’s world.”

Curry placed the committee’s budget work in an even larger context. The world, he said, is undergoing “profound shifts” religiously, culturally and politically.

“There’s a lot at stake and the Episcopal Church in this context matters, it matters profoundly,” Curry said.

“I wouldn’t be here if I didn’t believe that the Episcopal Church has witness, has a role and a message that reflects the Jesus of Nazareth that may well be just right for these times,” the presiding bishop said.

He told the committee that “following the way of Jesus as best we can discern it – for our time, for our church, in our cultural context – is how the Episcopal Church makes its witness, makes its mark, and matters.”

PB&F should strive, Curry said, to craft a budget that “looks like the movement of Jesus through the Episcopal Church in our world.”

Curry asked the committee to honor Scripture’s promise that if a group of people puts Christ at its center, they will be able to discern God’s call.

“Brothers and sister, if we do that, that will send a signal to this church that will have a ripple effect throughout the church and through the church to the world,” he said.

Curry then invited PB&F members to “come, labor on,” reciting the words of the hymn written by Jane Laurie Borthwick, to whom Jennings is related.

At the 2015 meeting of General Convention, bishops and deputies made the current voluntary diocesan budgetary asking system mandatory, beginning with the 2019-21 budget cycle, effective Jan. 1, 2019. Without getting a waiver, a diocese that does not pay the full assessment will be unable to get grants or loans from the Domestic and Foreign Missionary Society. 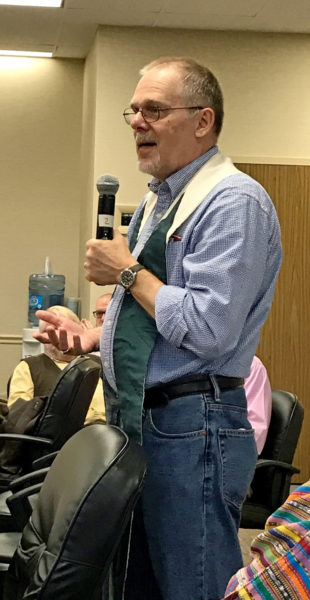 Jennings said that council’s Assessment Review Committee, which will handle waiver requests, and all those involved with the budget process have pledged to have “great compassion and empathy for those cases of hardship.”

“But we also know that there’s a spectrum of understanding of what hardship means,” she added.

However, the current draft anticipates that some dioceses will get full or partial waivers, up to a “maximum possible” $6.8 million, according to Lloyd. Thus, the likely diocesan contribution is pegged at $79.9 million. Each 1 percent in diocesan giving equals roughly $5.8 million, she said.

Jennings noted that the annual asking of dioceses stood at 21 percent five years ago. She said the projected revenue for 2019-21 is based in part on the assumption that dioceses that have been paying more than that will decrease their giving to 15 percent.

Have the dioceses that pay less than 15 percent “spent the last three years preparing to make this commitment to our common mission and life together?” Jennings asked. “Time will tell.”

Lane said that when the then-voluntary asking was 21 percent, the average percentage of actual contributions was 12.3 percent. A multi-year conversation resulted in “broad agreement across the church that 15 percent is a reasonable target,” he said. The pattern of diocesan giving over the 2016-18 triennium shows that many of the lesser-giving dioceses were moving closer to 15 percent, Lane pointed out.

“There’s still a number of dioceses that aren’t going to reach 15 percent but, many of them are working on it in good faith,” he said.

Jennings said that for PB&F “to make solid assumptions about income in this budget, you have to decide if we trust one another to keep the commitments we made at the last General Convention.”

PB&F Chair Barbara Miles said she hopes committee members “will think of this as a ministry and not just a job.”

“Our task is to listen and to be kind. Don’t try to argue with them. Just hear them. Then, we will try to do the work of budgeting here,” she said.

As the meeting closed on Oct. 23, Miles and Lane asked the PB&F members to summarize their goals for the process.

Diocese of New Jersey Bishop William “Chip” Stokes noted that budget committees often get into the mundane” out of necessity.

Members of the committee nodded their heads as he added, “I hope that every decision, everything we look at, is driven by that concern.”

The General Convention’s Joint Standing Committee on Program, Budget and Finance has 27 members, one bishop and two members of the House of Deputies, either lay or clerical, from each of the church’s nine provinces. Photo: Mary Frances Schjonberg/ Episcopal News Service

Here are the next steps in the budget process