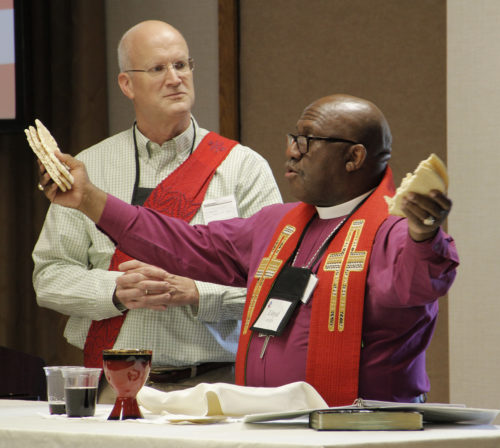 [Episcopal News Service – Linthicum Heights, Maryland] It would seem obvious that Episcopalians have Jesus at the center of their lives and that the Episcopal Church centers on Jesus. Yet, Presiding Bishop Michael Curry challenged the church’s Executive Council Oct. 18 to reflect deeply on whether the church and its members are truly answering the call of Christ during these times of challenges from outside and inside the church.

Curry’s remarks came during the opening session of council’s Oct. 18-21 meeting. The Rev. Gay Clark Jennings, president of the House of Deputies and Executive Council vice chair, joined him in that challenge. Council spent nearly 90 minutes listening to and discussing Curry’s challenge. The members and staff will continue that work Oct. 19, albeit from a different angle, in a session Jennings will lead on council committee reorganization.

Curry acknowledged that recently released data from the 2016 parochial reports from each congregation and diocese show that membership in the Episcopal Church continues to decline. The pace has slowed some, he said, but the trajectory remains downward. There were 6,473 domestic parishes and missions in 2016 compared with 6,510 in 2015. The number of baptized members who were active in 2016 was 1,745,156, compared with 1,779,335 in 2015.

While it may be tempting to despair and search for ways to return to a church that Episcopalians believe existed in the past, Curry said, he believes that if the church concentrates on making and forming disciples who truly live the way of Jesus, “we won’t have time to worry about average Sunday attendance; that will take care of itself.”

“If we continue to navel gaze, then we won’t survive, and probably shouldn’t,” he said. “If our concern is being the church of the 1950s, maintaining an institutional reality for the sake of the institution, maybe we don’t need to continue.”

But, if Episcopalians are concerned about keeping Jesus at the center of their lives, then “that’s church that has a reason to exist and will have a future.”

The presiding bishop asked council to consider the story told in Acts 16:6-10, known as the Macedonian Call. Paul, “having been forbidden by the Holy Spirit to speak the word in Asia,” according to the passage, has a vision one night of a man pleading with him to come help him and his friends in Macedonia. Once there, Paul meets and converts Lydia, her household and many others, and plants many churches on what is now known as his second missionary journey.

Curry insisted that the Episcopal Church might be experiencing its own Macedonian Call. The attendance data he cited is “either a cause for despair or a call to go to Macedonia.” The despair comes from feeling as if the church is blocked from resuscitating “the church we thought we once were.”

“Macedonia” needs Episcopalians, he said, in a time when “there are voices in our culture that masquerade as Christians.” However, those voices “do not even show basic humanitarian concern and care,” much less echoing Jesus’ message of love and forgiveness. 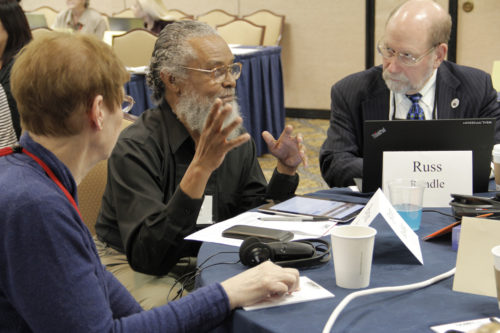 House of Deputies Vice President Byron Rushing, center, makes a point Oct. 18 as council members and others discuss ways to ensure that Jesus is always at the center of their lives and of the church. Council member Russ Randle, right, and Barbara Miles, chairwoman of the Joint Standing Commission on Program, Budget and Finance are among those listening. Photo: Mary Frances Schjonberg/Episcopal News Service

“I really believe that the way of Jesus, the way that is gracious, kind, loving, just, good – that way and that Jesus – is what the world is hungry for and God help us, we’re getting a Macedonian Call,” Curry said.

When Episcopalians answer that call, they will be a church reoriented around the gospel in the way, as in most congregations, the gospel is processed into the midst of the people and they turn to face the person who proclaims it, the presiding bishop said.

Curry acknowledged that his description of the world in need of authentic Christianity was an echo of what Jennings evoked for council in her remarks earlier in the session. Jennings reviewed a litany of what she has said is a “difficult season for Christians in the United States who are committed to doing justice, protecting God’s creation and safeguarding the dignity of every human being.”

“The situation feels unstable, and to many Americans, it is downright frightening,” Jennings said.

“I am encouraged that many Christians, and many of you here this morning, are mobilizing to resist the onslaught of policies and pronouncements – and tweets – that run counter to our gospel values and our vision of the kingdom of God,” she said. “People of faith have played important roles in opposing several unsuccessful attempts to take health care away from millions of Americans, and we are also committed to defeating the current attempt to deport hundreds of thousands of young ‘dreamers’ who were brought to this country without documentation as children.”

Jennings anchored that advocacy in the public policy actions taken by the General Convention, and she praised the support of the Office of Government Relations in Washington D.C., for helping mobilize the Episcopal Church, especially when legislative remedies are sought.

“We are working hard; the issues come at us fast these days. But we are organized, we are mobilizing more quickly than in the past, and we are resisting for the sake of the most vulnerable people in our communities and our congregations,” she said.

Episcopalians must “counter an impoverished and vindictive interpretation of our faith with what my friend here calls the loving, liberating and life-giving message of the Jesus Movement,” Jennings said, referring to Curry.

Given the gravity of what Jennings described, she admitted that council might think it odd when, on Oct. 19, she leads a session on the group’s committee structure.

“Now, I realize that the kingdom of God is not like a committee meeting, or at least I hope not,” she said. “But the work we do here to fulfill our canonical responsibility – which is to provide board-level oversight and direction to the work of the DFMS as defined by General Convention – makes it possible for the rest of the church to do its work. In our tradition, governance does not stand in opposition to mission or even detract from mission. Governance, done efficiently, transparently and collaboratively, makes mission and witness, prophetic witness, possible.”

After the opening plenary on Oct. 18, council spent the rest of the day and the morning of Oct. 19 meeting in its five committees. Later on Oct. 19, council members will get an update on the recent work of Episcopal Relief & Development, and they will have the Jennings-led discussion on possible ways to reorganize their work on council. Committee meetings will also take up most of Oct. 20 and, on Oct. 21, the committees will each report to the full body, proposing resolutions for the full body to consider.

The Oct. 18-21 meeting is taking place at the Maritime Institute Conference Center.