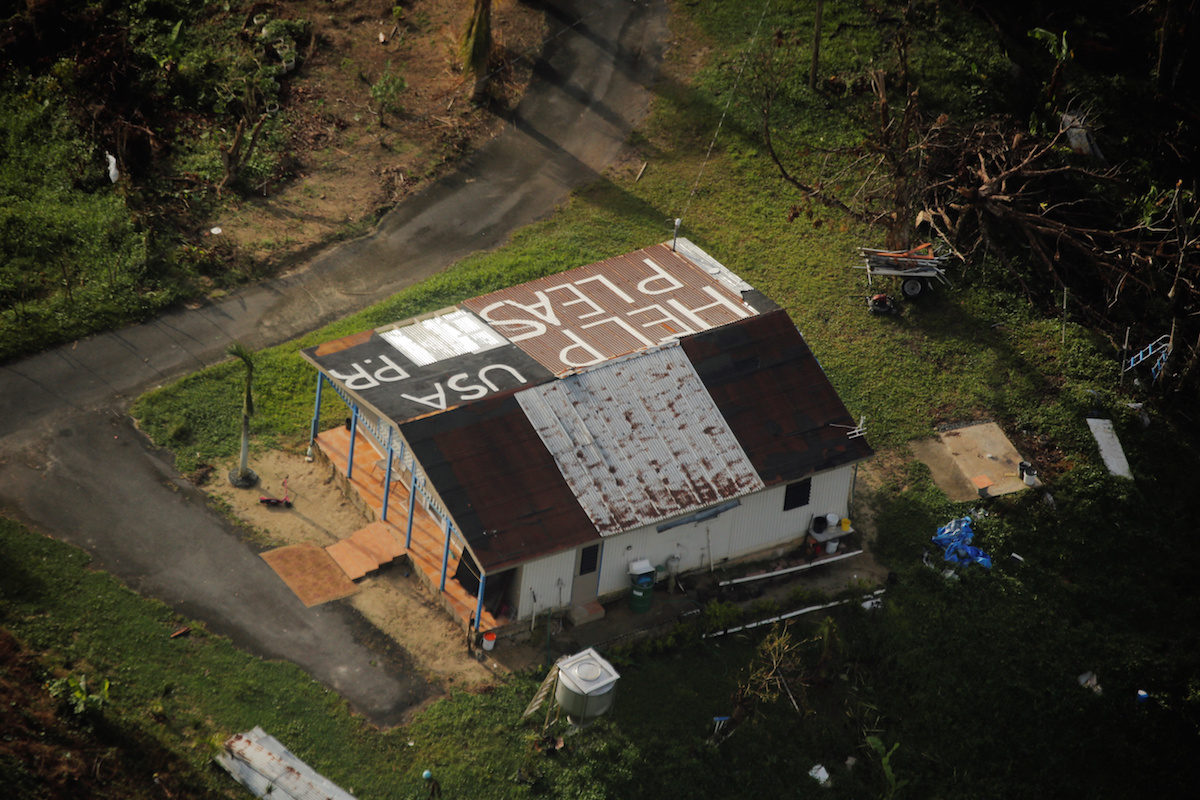 A message written on top of a building is seen from the air during recovery efforts following Hurricane Maria near Humacao, Puerto Rico on Oct. 11. Photo: Reuters/Lucas Jackson

[Episcopal News Service] Episcopal clergy and congregation members are resuming church services and school classes when they can and how they can, despite the vast devastation in Puerto Rico almost a month after Hurricane Maria swept through Sept. 20.

It was the strongest storm the island has faced since before the Great Depression, a Category 4 hurricane that spewed up to 40 inches of rain in some places in one day, whereas Houston, Texas, saw 32 inches in three days from Hurricane Harvey in late August, according to the Weather Channel and the National Hurricane Center.

Almost a month after Maria, Puerto Ricans are still in crisis mode.

Forty-five deaths have been reported so far related to the storm, and residents in the northern part of the island have no clean water to drink so they are drinking contaminated water from nearby rivers, according to Episcopal Relief & Development. About 90 percent of the island was still without electricity as of Oct. 11, three weeks after Maria hit. In comparison, 22 percent of the homes and businesses on the Virgin Islands are without power from Maria.

“The lives of so many people have been turned upside down,” said Abagail Nelson, Episcopal Relief & Development’s senior vice president of programs, in the latest Hurricane Maria report. “This is a humanitarian crisis that will affect many people in the years to come.” 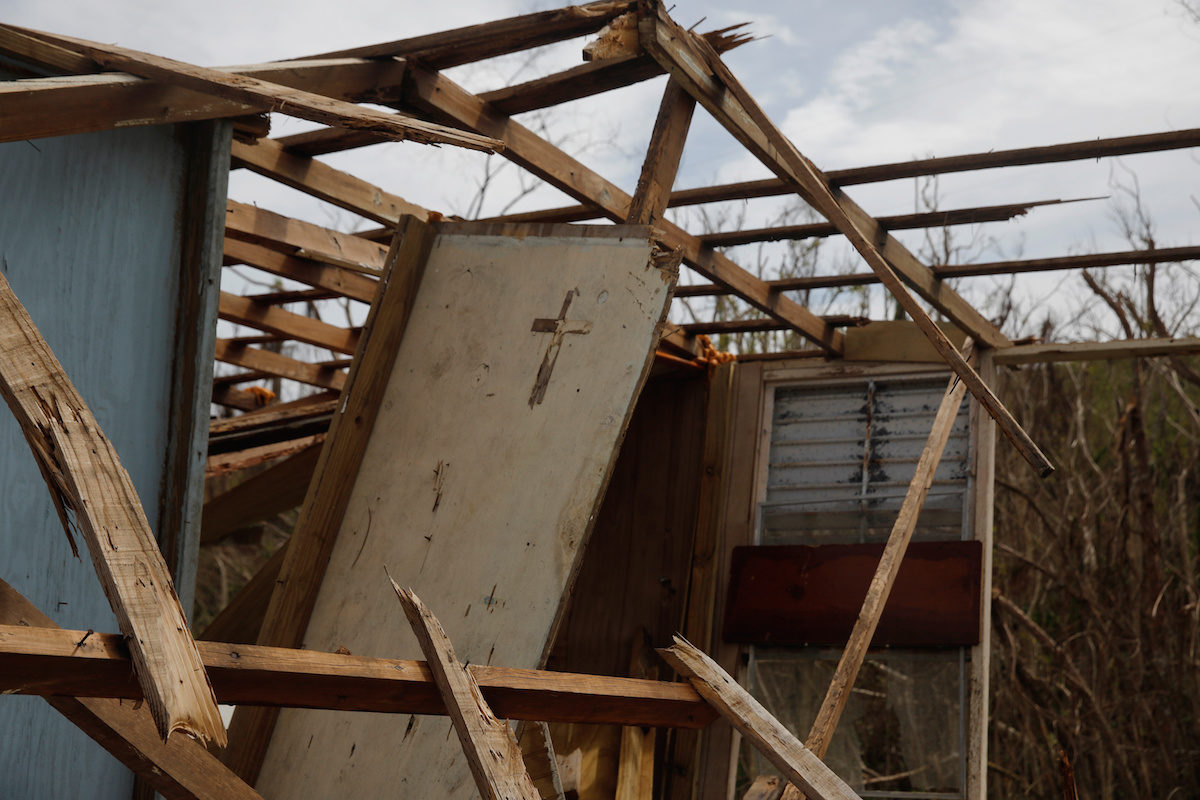 A wooden cross is seen on the door of a home damaged by Hurricane Maria near the municipality of Morovis, outside San Juan, Puerto Rico, Oct. 10. Photo: Reuters/Shannon Stapleton

Coordinating donations with local agencies to get basic supplies to those who most need it is a logistics challenge that Episcopal Relief & Development is working on daily, along with many others. Volunteers are organizing shipments of water and food to residents of Maricao, Ponce and other remote areas. The organization is planning on supplying water-purification systems to those isolated communities.

Communication is still dicey and is expected to remain that way for several more months. Satellite phones are helping diocesan members communicate with each other, church partners, emergency services and communities.

Social media has been the most reliable way to communicate. The Episcopal Cathedral School in San Juan closed like most institutions, and parents didn’t have to pay September fees. The K-12 school reopened for classes Oct. 10 and restarted its after-school program Oct. 16. Like most places, the school still has no electrical power, so students are advised to bring, if they can, baby wipes, hand sanitizer, bottled water and insect repellent spray. They are allowed to wear Bermuda-style pants and sleeveless shirts and will have no tests and limited homework for the time being.

Also on Oct. 16, the school counselor announced that college admission deadlines have been extended for both Puerto Rico and mainland U.S. colleges. “I hope that this serves as a means of reassurance that we will continue to have a successful academic year,” said Karen Santiago Garcia, guidance counselor.

On Oct. 15, the Rt. Rev. Rafael Morales Maldonado, bishop of the Diocese of Puerto Rico, celebrated Holy Eucharist at Misión San Gabriel Arcángel in Humacao on the east side of the island. 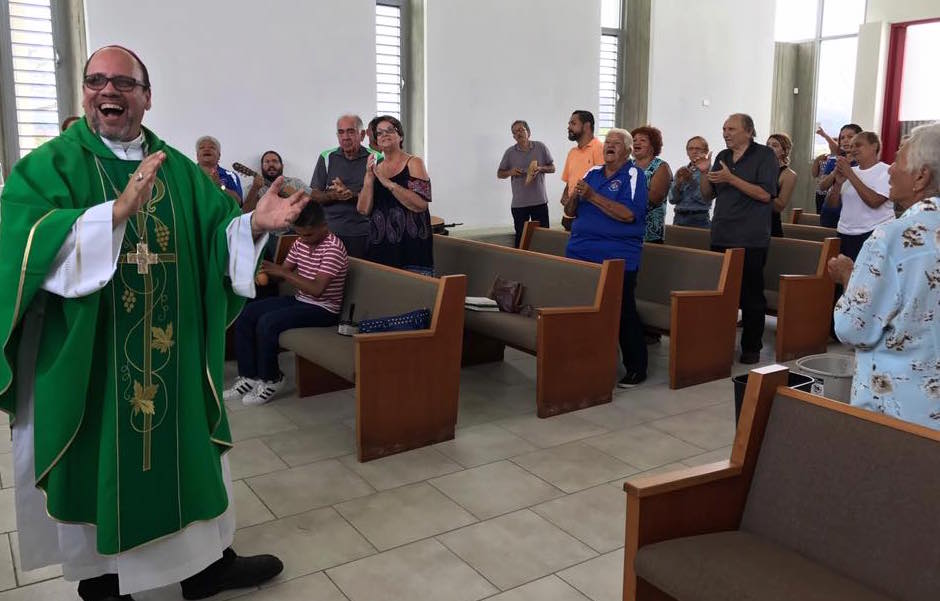 “We cry and laugh together. We discovered the strength of the Lord in our new project to lift and build,” Morales said in a Facebook post, as translated by the social media site.

The bishop has been working with Xavier Castellanos, the Episcopal Relief & Development representative who’s onsite to lend his expertise, to mobilize church partners as they continue to assess the needs of different areas of the island and especially to send help and food to the more remote mountainous regions. The organization sent emergency support in advance of Hurricane Maria in order to help the diocese provide assistance quickly.

Meanwhile, back in the continental United States, people with family and friends in Puerto Rico are still worrying about them.

The Rev. Gladys Rodriguez of Church of the Incarnation in Oviedo, Florida, has been able to speak only briefly a few times with her husband, Victor Rivera Gonzalez, who is in Puerto Rico. They have homes in both places, and before the storm, she would travel back and forth. Their house in the Guaynabo area of the island is made of cement and held up well, but their roof is damaged. Victor Gonzalez had stocked up on water and has been able to share it with neighbors. “He has been eating canned food. He has no electricity. There is no communication with the center of the island,” Gladys Rodriguez said in an email.

One of Rodriguez’s church members in Florida lost contact with a relative in Ponce who needed supplies. Eventually, the relative found someone to drive through the hazardous roads to help her. “Everyone is in desperate need for cash, water, electricity, food and medicines,” Rodriguez said. When air travel becomes easier, probably by the end of October, her husband plans to fly to her in Oviedo.

Lynn Hendricks, president of the National Altar Guild Association based in Birmingham, Alabama, built Eucharist kits for Puerto Rico. One of her fellow church members planned to fly his plane to the island to deliver generators, water and other supplies for the relief effort and offered to take the kits along.

“He said transportation is a problem on the island, and he was being met so wasn’t sure if he would be able to deliver them personally, but he would see the diocese was contacted and told where they could pick them up if he wasn’t able to hand deliver them,” Hendricks said in an email to Episcopal News Service. 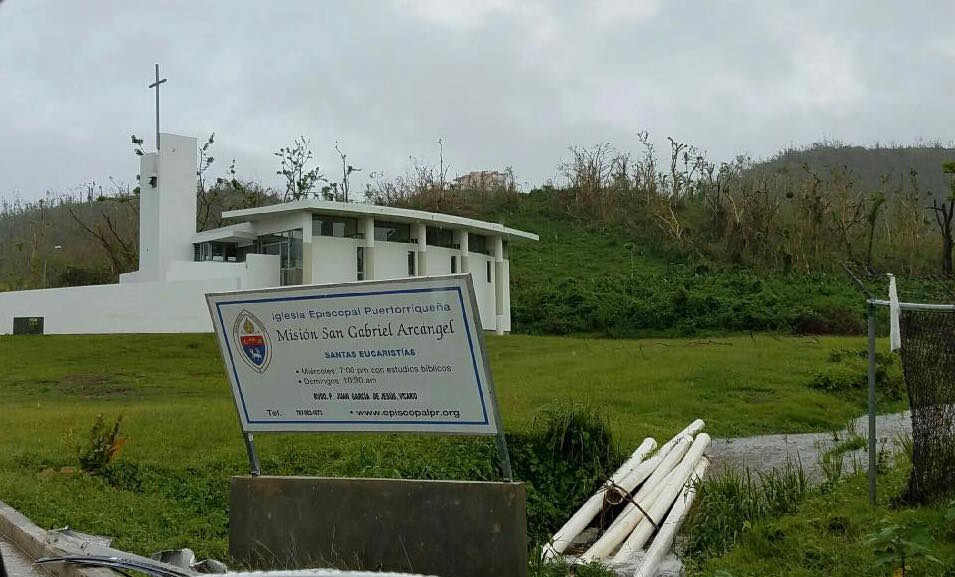 Misión San Gabriel Arcángel in Humacao, southeast of San Juan and near the eastern coast, hosted services for Episcopalians on Oct. 15. Photo: the Rt. Rev. Rafael Morales Maldonado via Facebook

The Rt. Rev. Andrew M L Dietsche, bishop of New York, held a service for the victims of natural disasters in the Caribbean and Mexico on Oct. 7, at the Cathedral of Saint John the Divine. The hurricane that ravaged Puerto Rico was one the latest in a series of natural disasters that have, in just over a month, unleashed “unspeakable ruin upon Texas, Florida, the Caribbean (especially the Virgin Islands and Cuba), Mexico, and now Puerto Rico,” Dietsche said in his advance announcement of the service.

“Countless people in our diocese have been personally affected by these storms. Indeed, members of my own staff have lived through harrowing days in the last week waiting for word from missing family members,” he said. “I know that they represent thousands of New Yorkers who have carried the same fears for those they love.”

People can help by donating to Episcopal Relief & Development’s Hurricane Relief Fund, which will help partners reach the vulnerable communities devastated by the recent tropical storms.

— Amy Sowder is a special correspondent for the Episcopal News Service. She is also a journalist and editor based in New York City. Reach her at amysowderepiscopalnews@gmail.com.