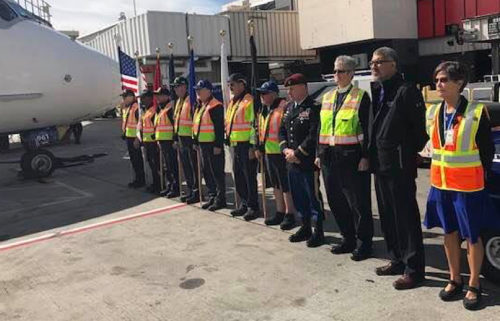 Johnson is one of four U.S. Army Special Forces soldiers killed Oct. 4 in Niger when a joint U.S.-Nigerien patrol was attacked.

Wright, who was at the airport on a previously scheduled visit, said he was honored to be part of the ceremony, an ongoing welcome for deceased service members regularly conducted by a volunteer group of Delta Airlines employees accompanied by airport chaplains.

“Even Jesus marveled at the discipline and dedication of those who wear a uniform,” said Wright, who served for five years in the U.S. Navy. “We owe our servicemen and women much more than occasional moments of silence and our prayers.”

The Episcopal Diocese of Atlanta is part of the Interfaith Airport Chaplaincy (IAC) at Hartsfield-Jackson Atlanta International Airport (ATL) that was founded in 1980 and, throughout the intervening years, has provided interreligious emotional and spiritual care to passengers and employees at the world’s busiest airport. In 2016, 104 million passengers traveled through ATL, an average of more than 275,000 daily. ATL is also the largest single site of employment in Georgia with over 63,000 employees.

Laypeople of the Diocese of Atlanta were among the original chaplains of the IAC. Mote was assigned as Episcopal chaplain to ATL by Wright in November 2013. Since January 2014, Pendergrast, a board-certified chaplain endorsed by the Episcopal Church, has volunteered with the IAC.

At the invitation of Delta Airlines, Mote and Pendergrast, along with three other IAC chaplains, accompany military remains as they terminate in or transit through ATL on Delta. On average, Delta handles two service members’ remains daily in Atlanta. The chaplains bear witness to the dignified transfer of the remains and accompany the official military escorts throughout their time at the airport.

The Delta Honor Guard renders honors to the fallen who pass through ATL under the direction of Coordinator Brian J. McConnell Sr. a 35-year veteran of Delta who has overseen the Honor Guard for 12 years and handled the remains of some 6,000 U.S. military personnel. The Delta Honor Guard members are volunteers from work areas across the company; most of them are veterans, have a child or sibling currently serving, or both.

— Don Plummer is media and community relations director for the Diocese of Atlanta and attends St. Teresa’s Episcopal Church in Acworth, Georgia.