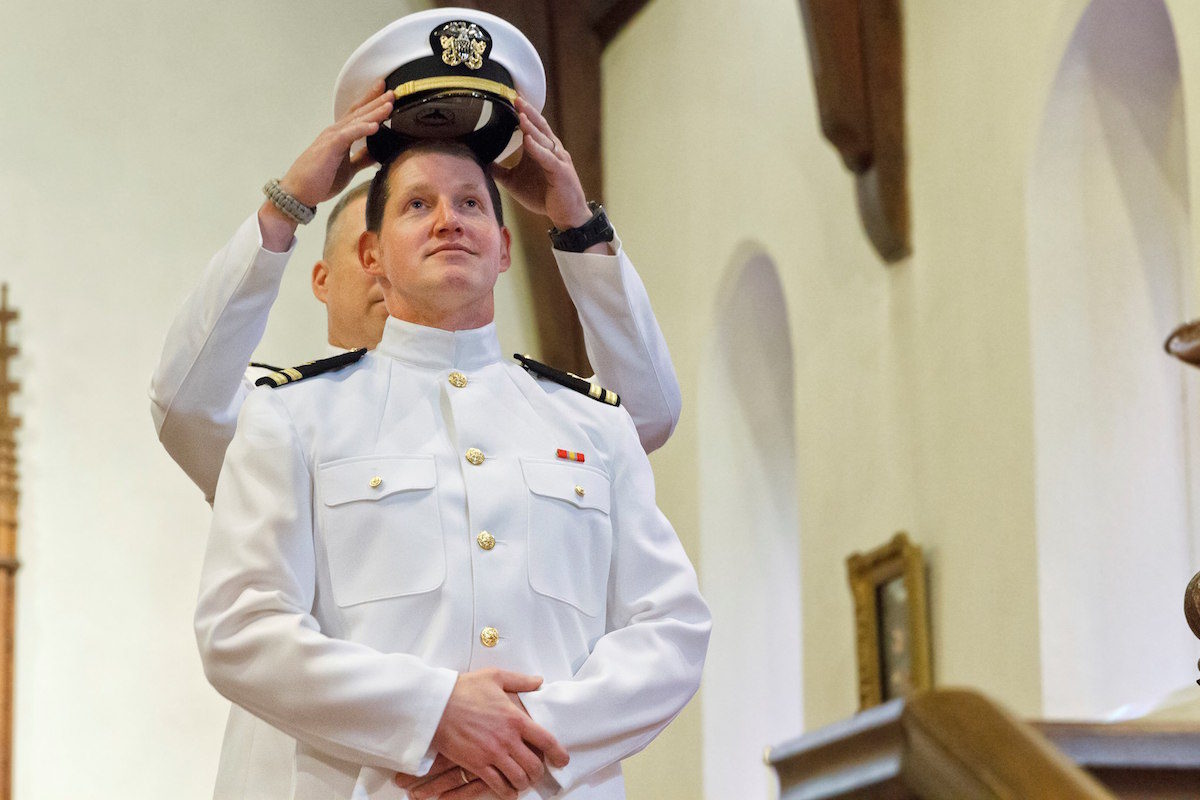 The Rev. Nathan Ferrell, a reserve chaplain in the U.S. Navy, was commissioned April 23, 2017. Photo: Adam Birt/Two Infinite Things, via Office of the Bishop for Armed Forces and Federal Ministries

Many patients were military veterans and spouses. As he counseled them, Woods, a lay chaplain, heard what an impact military chaplains made in their lives.

That’s when Woods, now 34, knew he wanted to become a military chaplain. Such a chaplain is a clergy member who provides spiritual leadership, counseling and religious services for an institution other than a parish, such as a prison, university, hospital or branch of the armed forces.

But the process to become a military chaplain specifically is tough. Woods knew of no seminary with a military chaplaincy concentration, and there are so many requirements from both the church and military that it can be a tedious and frustrating path to navigate.

“One of the reasons it was a long and winding road for me was because I was doing it without guidance,” Woods said, although he did have help from the Rev. Dave Scheider, a now-retired U.S. Army chaplain of 25 years and a faculty member of Seminary of the Southwest in Austin, Texas.

Woods is a senior at that Episcopal seminary now, but those coming after him should have it easier. On Sept. 12, Seminary of the Southwest announced the launch of a military chaplaincy concentration for its master of divinity degree. It’s the first of its kind among Episcopal seminaries.

The seminary didn’t create this concentration from scratch, said Eric Scott, the seminary’s communications and marketing director. For 15 years, Seminary of the Southwest has been the only Episcopal seminary that offers an accredited master’s degree in mental health for students to become licensed professional counselors, Scott said. It’s a clinical degree, completely separate from the religious world. 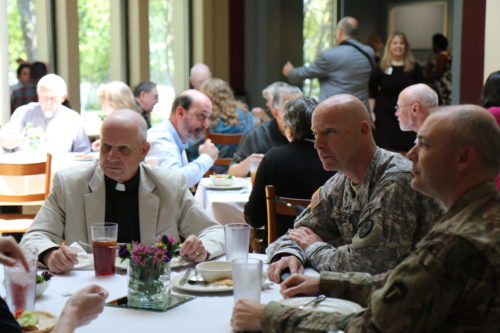 Seminarians on the military chaplaincy track will take the same required courses as their master of divinity peers, while using their elective courses for the concentration.

It also helps that the seminary is fewer than 100 miles from three of the country’s largest military bases, so seminarians can do their required field work at nearby parishes that support the military and their families: the U.S. Army’s Fort Hood in Killeen and the U.S. Air Force’s Lackland and Randolph bases.

The Rt. Rev. Carl Wright, bishop suffragan for the armed forces and federal ministries, visited the Austin campus when the program was officially launched. Wright provides ecclesiastical supervision for 130 Episcopal military chaplains on the federal payroll and would love to double that number if he had enough priests trained and called to the ministry. He sees the growth in specialized ministries as a trend in the Episcopal Church.

“The M.Div. military track is groundbreaking, and it’s the wave of the future in our church, because we’ve always known that everybody does not feel called specifically to parish ministry,” Wright said, recalling his visit. He applauds Seminary of the Southwest, “not only for acknowledging other calls but also for creating a way for us to pursue them.” 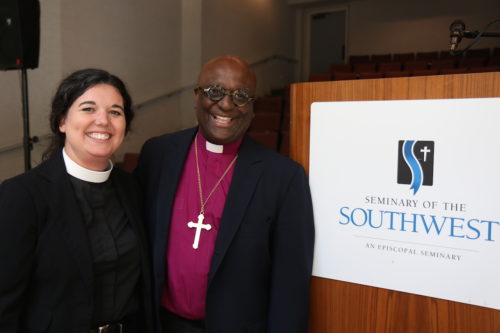 These seminarians receive training in suicide prevention, marriage and relationship counseling, and ministering to soldiers with post-traumatic stress disorder, addiction issues and other kinds of crisis. The degree also entails fieldwork in Veterans Affairs hospitals and other medical facilities.

There’s a shortage of Episcopal chaplains in the military, where spiritual guidance and counseling is needed for those who don’t fall in line with more conservative beliefs, Scheider said. He oversees three of the seminary’s graduate programs designed for laity and clergy in counseling, chaplaincy and spiritual formation. Scheider will mentor the military chaplaincy students.

“The ability to minister to everybody in the units who fall all across the political and theological spectrum is so challenging. That’s really hard to do, and that’s what we want them to be formed to do,” Scheider said.

He wants chaplains to enter the military equipped to master the political culture and pressures, such as being able to counsel the young service people, often minorities, who join in the lower ranks to get out of poverty. Chaplains also must gain the respect of higher-ranking officers, who tend to be more conservative, Scheider said.

There’s an increase of sexual minorities in the military, but a decrease in chaplains from denominations that are more accepting of their beliefs and lifestyles, he said. Throughout the week when chaplains are not leading services, they counsel people going through serious issues, and even though they’re not officially mental health counselors, they might be the most available members in the unit. 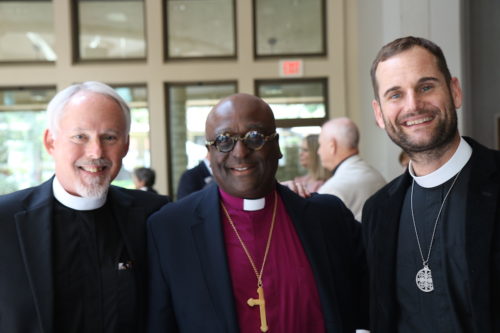 “All they have to do is go up to a chaplain and say, ‘Hey do you have a minute,’” Scheider said, and the service member can expect complete confidentiality, even if there’s suicidal intent. Chaplains are considered clergy, not medical professionals, and therefore are not subject to the same exceptions to the federal Health Insurance Portability and Accountability Act (HIPPA) rules, as well as state exceptions, that require or permit disclosure of patients’ serious and imminent thoughts of harming themselves. These rules, requirements and exceptions, along with the liability involved, can be tricky, but the goal is to keep the person seeking help safe, and to build enough trust to do that.

“Chaplains are extremely safe for service members to just lay open their heart and not experience any consequences,” Scheider said.

In his last decade of active military service, Scheider specialized on helping couples who’d had affairs, a portion of whom marry young to get out of the barracks and receive benefits. He earned extra counseling degrees and a marriage and family therapy license to better do that.

“All couples need to have that level of support and not be discriminated against, and we’re one of the few denominations that encourage our chaplains to provide that kind of support to same-sex couples,” he said.

Above all, Scheider and Woods agree that a military chaplain needs to be a priest first and a military service member second. That’s why a firm grounding in the seminary is so important.

Until now, there has been no one specific route within an Episcopal seminary for students who want training to become military chaplains rather than serve a parish. The Episcopal Church does have a program for seminarians to become “chaplain candidates.” They enter the reserves for training during the summer between their junior and senior seminary years. Those chaplain candidates continue training and drilling as reservists until they finish their mandatory parish experience time (up to two years), according to the Rev. Leslie Nuñez Steffensen, canon to the bishop of armed forces and federal ministries.

Interested seminarians or clergy must enter the U.S. military’s chaplain-recruitment process and, at a certain point, receive their denomination’s so-called ecclesiastical endorsement. 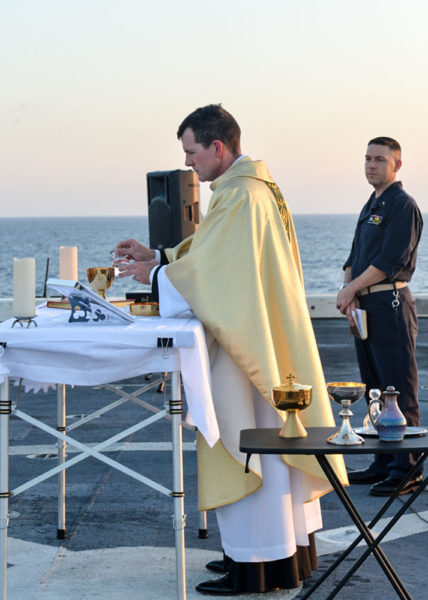 The Rev. Todd Delaney is a chaplain in the U.S. military, performing services no matter where he’s stationed. Photo: Office of the bishop for armed forces and federal ministries

Some people were in the military first, and then left to get ordained and their chaplaincy training at a seminary. Others were priests first, and then entered the military. The U.S. Army, for instance, outlines three of the main hurdles: receive ecclesiastical endorsement, earn a baccalaureate degree, and be a full-time graduate student at seminary or theological school.

For Woods, he first had to discover that he wanted to be an Episcopalian. He had previously worked as a lay chaplain and an assistant pastor of a nondenominational church. Before that, he graduated from Vanderbilt University’s seminary with a master’s degree in theological studies, and was following the teaching of his childhood church, Assemblies of God. But as Woods grew older, he found that denomination limiting, and he loves the openness to questioning and inclusiveness of the Episcopal Church.

He was convinced when he saw an almost equal number of Republican and Democrat political bumper stickers during the Obama-Romney presidential election in the parking lot of his first visit to an Episcopal church, St. Simon’s on the Sound in Fort Walton Beach.

Chaplains must be comfortable with diversity and multiculturalism to do well in the military, Scheider said. That same kind of welcoming, accepting spirit is what drew Woods to the Episcopal Church in the first place, and why the military needs more Episcopalian chaplains with a firm grounding in both worlds, he and Woods say.

“In the military, you’ll be a priest or a pastor to some, but you’ll be a chaplain to all,” Woods said. “Everyone that I care for will not be Episcopalian. I’ll need a whole different toolbox to care for all the other people with different types of beliefs.”