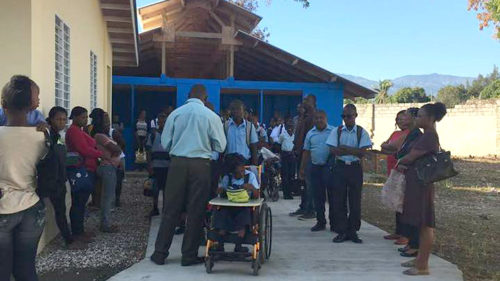 [Episcopal News Service] The threat of violent political protests in Haiti has forced Episcopal leaders to postpone the grand opening celebration at a rebuilt school that had been scheduled for Oct. 16.

The Oct. 12 letter from St. Vincent’s School administrators did not identify a specific threat to the school but spoke of general concern for security at the grand opening celebration, especially given that some of recent violence has affected foreign visitors.

Rebuilding the St. Vincent’s School for Handicapped Children in Port-au-Prince, destroyed by the 2010 earthquake that struck the Caribbean island nation, has long been a priority of the Episcopal Diocese of Haiti. As of earlier this year, the school’s board had acquired a new property in Santo, renovated an existing house and planned other buildings on the site.

Students first began attending the new school on Sept. 11, and the grand opening on Oct. 16 was planned as a two-hour ceremony celebrating the new facility, with a tour to follow.

But in an email Oct. 12, Board Chairman William Craddock and Development Coordinator Jennifer Wickham said the country’s recent political unrest was “a volatile situation worthy of our attention,” and they tentatively moved the grand opening celebrations to Dec. 3, to coincide with International Day of Persons with Disabilities.

“We are grateful for all those who support Saint Vincent with gifts and prayers, and we are especially thankful to those of you who made travel plans to be with us during these gatherings,” Craddock and Wickham said. “We regret the many inconveniences caused by this decision, but we are in agreement that the safety of our students, families and guests must be of paramount importance.”

Since 2016, the rebuilding of St. Vincent’s has received the support of the Haiti Partnership Committee, established by a memo of understanding between the Episcopal Church and Diocese of Haiti. The school is one of three priorities of the committee, the other two projects being the Holy Trinity Cathedral Complex and St. Barnabas Agricultural College.

Two years earlier, St. Vincent’s got a substantial financial boost from the gift of a New York Episcopalian, Mary White. Although the amount of her gift was not made public, it was celebrated in 2014 as an expression of confidence in the church’s work in Haiti helping children with disabilities.

The magnitude 7 earthquake that struck Haiti on Jan. 12, 2010, killed more than 300,000 people, left as many wounded and displaced more than 1.5 million. It also destroyed 80 percent of the Diocese of Haiti’s infrastructure in Port-au-Prince.

Governments and international relief agencies responded by committing billions of dollars in aid to Haiti, long considered the poorest nation in the Western Hemisphere.

As the country recovered over the following years, signs of the earthquake’s toll have remained. Holy Trinity Cathedral, for example, was destroyed in the earthquake and has yet to be rebuilt. A temporary structure is in place while the Haiti Partnership Committee moves toward eventual construction.

Haiti also was hit hard in 2016 by Hurricane Matthew, which left 546 dead and an estimated $2.8 billion in damage in the country. This year, the series of severe hurricanes that barreled through the Caribbean disrupted farm operations in Haiti, but the island was spared a direct hit from the storms.

Political protests, meanwhile, have been escalating recently over tax hikes. Demonstrators damaged buildings and set cars on fire in a September protest that took aim at the administration of Haitian President Jovenel Moise, according to Reuters.

In addition to delaying the grand opening event until December, church leaders postponed a partnership engagement meeting and a meeting of the board of directors.