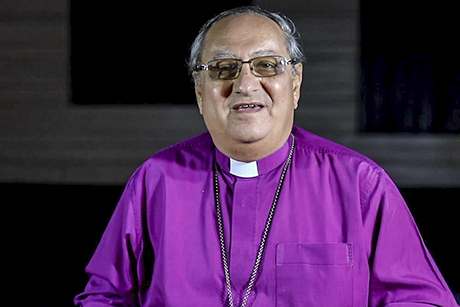 [Anglican Communion News Service] A new global commission to “bring mutual understanding and build trust where there is ignorance, fear and hostility” between different faith groups has been launched Oct. 6 at the Anglican Communion’s Primates Meeting in Canterbury, England.

The new Anglican Inter Faith Commission had been requested by members of the Anglican Consultative Council when they met in Lusaka last year. Primates from 33 Anglican provinces heard how the new body had now been established.

Bishop of Egypt with North Africa and the Horn of Africa Mouneer Anis will chair the new group, which will meet for the first time in Cairo in February next year. He addressed the primates in a video message filmed in his diocese’s new media centre. Each province in the Anglican Communion has been invited identify suitable members of the commission.

“Building on the strong foundations laid by the Network for Inter Faith Concerns (NIFCON), the Anglican Inter Faith Commission . . . will work both internationally and in regional groups across the Anglican Communion, in the first instance to gather research into the engagement of Anglicans with people of other faiths,” a spokesperson for the commission said. “It will look at both the challenges and the opportunities of inter faith dialogue, of working together with other faith communities for the common good and of witnessing to and sharing the love of God with others.

“The commission will listen carefully to the experiences of Anglicans in all the provinces and will seek to identify good practice which can be shared throughout the Communion. It will then develop regional and thematic work streams which will seek to enrich the life and ministry of the Anglican Communion worldwide in its relationships with people from faith backgrounds other than Christian.”

At a press conference in a building overlooking Canterbury Cathedral, at the end of the Primates Meeting,  Archbishop of Canterbury Justin Welby said that “the issues of interfaith strain, stress, even conflict, are global, they are generational and they are ideological.”

He said that the new commission “will bring together the wisest people across the Communion to work on this area in the places of highest tension with the aim of replacing diversity in conflict with diversity in collaboration.”

The commission would operate at “different levels,” Welby said. “There is a very strong emphasis on operating at a global level, but also at provincial and regional levels . . . because different levels face different issues of conflict between faiths, or of tension between faiths, and potential conflict; and opportunities for collaboration between faith groups depending upon whether Christians are a majority or minority in the area, or what the other faith groups are in the area, and so on.

“It will look at both issues around the theology of our differences and how we handle those, and also practical application of working together.”

The secretary general of the Anglican Communion, Josiah Idowu-Fearon, told ACNS that at a time of “ever increasing influence of extremists . . . among the major religious communities in a significant number of our provinces, this Inter Faith Commission and its objectives are a welcome and timely step in the right direction.

“This is an opportunity for the Anglican Communion to play its role in every part of the world where we are present.”

Speaking at the press conference, he added: “particularly in parts of the world where Christians are a minority, with this Anglican commission, the minority status will now have something bigger to look up to. It means when that country speaks there are 165 other countries speaking through that local representation.”