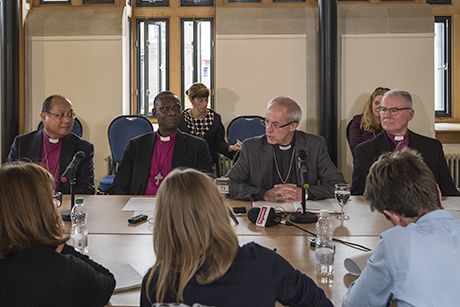 [Anglican Communion News Service] The Archbishop of Canterbury has spoken of his “profound sense of shame” over church-based abuse of children and vulnerable adults. Archbishop Justin Welby made the comments at a press briefing during the Primates Meeting in Canterbury Cathedral. He had been asked about planned visits to Canterbury by groups of survivors on Friday, who want to ensure that their concerns are heard by the church leaders gathered for the meeting.

Welby said that the “extent of the legacy of abuse” was “one of the surprises” he faced when he became archbishop in 2013.

“I feel that the church – and it is widely accepted within the church – that we have a long history of significant failure,” he said. “We should be held to a higher standard because we are Christians. We are a church.

“But it is also clear that the issue of abuse of children and vulnerable adults goes right through our society – almost all our major national institutions have failed in that regard. As I say, we should be at a higher standard and my profound sense of shame at what the church has done remains and is central to my thinking about this.”

The archbishop told journalists that he wakes up at night “thinking what was done to people and our failure to respond to it properly.”

The church, he said, had “a long way to go” but had made “progress in current terms” in its approach to safeguarding. He said that no organization could “ever afford to say . . . ‘that’s behind us.’”

He wanted to say to survivors of abuse: “We know we did wrong. We’re trying as hard as we can to get things right.”

He explained that he spoke regularly with the primate of Australia, Archbishop Philip Freier, about that church’s response to safeguarding, saying that “the Australian Church has done a lot of work on this.” A royal commission – a formal public inquiry – has recently been held in Australia to investigate institutional responses to child abuse. A statutory public inquiry – the Independent Inquiry into Child Sexual Abuse – is currently undertaking a similar investigation in England and Wales.

Welby said that “in response to discussions with survivors and seeing the need for it,” he had written to the British Home secretary – the current Prime Minister Theresa May – before IICSA was announced to call for a public inquiry and to urge “that the Church of England should be one of the first” organizations to be investigated.

Together, the Church of England and the Church in Wales, form “the Anglican Church strand” of the IICSA inquiry. Hearings in the Anglican strand are expected to begin early next year. A preliminary hearing is taking place Oct. 4 in London.

“As a case study, we will consider the experience of the Diocese of Chichester, where there have been multiple allegations of sexual abuse and numerous investigations and reviews. We will also consider the case of Peter Ball, formerly bishop of Lewes and subsequently bishop of Gloucester, and investigate whether there were inappropriate attempts by people of prominence to interfere in the criminal justice process after he was first accused of child sexual offenses.”