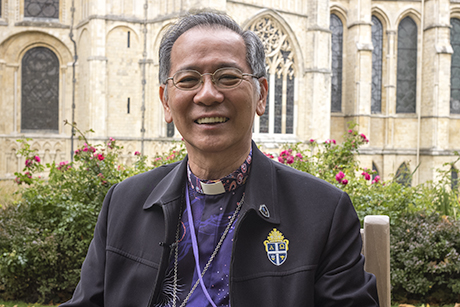 [Anglican Communion News Service] A discussion about evangelism and discipleship strategies amongst the leaders of the Anglican Communion’s 39 independent provinces was so lively, it continued through the lunch break, the archbishop of the Province of South East Asia said Oct. 4.

Archbishop Moon Hing, the bishop of West Malaysia, led a Bible study at the start of this morning’s session of the 2017 Primates Meeting before a general discussion on witness and evangelism. The archbishop chairs the international Anglican Witness group of mission leaders and practitioners, said that he was “very happy and very glad” about the discussions, saying: “I am really uplifted because we come back to the core issue and core subject of our existence: that is to make disciples for Jesus.”

In an interview for ACNS, the archbishop said that his Bible study was about “Jesus, the bread of life, who provides all our needs.” People who knew what it was to be a disciple “must be intentional to do it ourselves and to make it available and help others to walk with him. Even though we have this intention we need to have some ways to do it,” he said.

In what he described as “the best response” so far during this year’s Primates Meeting, “everybody contributed and shared how different facets of evangelism and discipleship can be done.” There was not just one method of evangelism, he said, “there are many ways, directly [and] indirectly to bring the message of Christ, that he is the bread of life, and that he is the answer,” to the world.

“There was a very lively atmosphere and everybody enjoyed it,” he said. “Even during lunchtime everybody talked about it. One of the primates said: ‘We should not be issue-driven, we should be discipleship-driven.’”

The discussion on evangelism and discipleship took place the day after Dean of Canterbury Robert Willis led the primates on a late-night candlelit tour of the cathedral. the archbishop described the prayerful walk as “fascinating.” The dean took the primates and some of the meeting’s support staff on a tour which took in the floor engraving of the Compass Rose, the symbol of the Anglican Communion, as well as the site of the martyrdom of 12th century Archbishop of Canterbury Thomas Becket, before concluding at the Chapel of Saints and Martyrs, which commemorates more recent Christian martyrs from around the world. 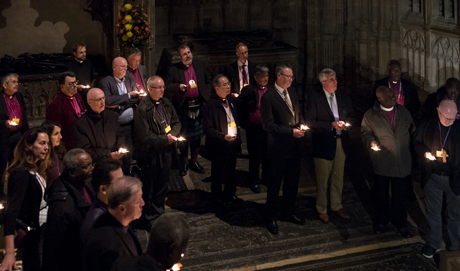 Anglican primates and support staff for the 2017 Primates’ Meeting are given a candlelit tour of Canterbury Cathedral by Dean Robert Willis.
Photo: ACNS

The archbishop said that the tour bought to mind “the early years when the cathedral began. . . We went to some of the memorable spots in the history of the cathedral, and especially the conflicts and places of sacrifice, where people gave their lives” where the primates reflected and heard from God.

“The greatest thing that I got impact on my life from last night’s tour was the faithfulness of God through all these years: that even though when we quarrel, we have conflicts, God has never given up on us; and every time we come back to him, he is always there. And he is ready every moment for us to come back and say ‘let’s walk together again with one another, with our neighbours and with him.’”

The archbishop is one of 16 new primates attending their first Primates Meeting, having been appointed or elected since the previous Primates Meeting in January 2016. “Before I came I read a lot of the social media and comments that it’s a waste of time.” he said. “But then when I come, I realised that all of us primates are actually very lonely. And it is really a good time to encourage one another.

“One of the primates was saying he was very encouraged that he knows that as a primate he is not alone, that so many of us can all come together and share,” he said. “He encouraged us to meet more regularly . . . for fellowship or times of encouragement.”

He said that through the Primates Meeting, there was a realization that “there is a whole bunch of us doing the same thing, and struggling the same way, and sometimes crying to him, calling up to him.

“We are not alone. There are others. And now we can connect with one another and we can actually build upon the strength of one another and strengthen the weaknesses of each other. That is wonderful.”

The Primates Meeting brings together the leaders of the 39 autonomous Anglican Churches. It is meeting this week in Canterbury Cathedral, England. After a half-day spiritual retreat on Oct. 2, the primates spent a day-and-a-half discussing “internal Communion matters” before moving on to three days of discussion of outward-facing issues, including evangelism and discipleship, climate change, religious freedom, and inter-religious dialogue.

More information about the primates and the Primates Meeting is here.