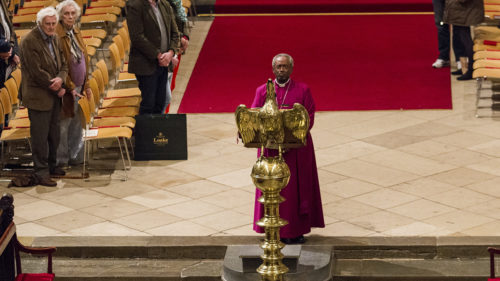 [Episcopal News Service, Canterbury – England] Presiding Bishop Michael Curry is joining most of his fellow Anglican primates – or senior church leaders – in Canterbury this week for a five-day meeting that focuses primarily on global issues of peace and justice, evangelism and discipleship. But the issue of marriage equality has taken up a significant portion of the opening two days.

The Scottish Episcopal Church on Oct. 3 agreed to accept certain “consequences” for voting earlier this year to allow same-sex marriage in church.

The primates, at its last gathering in January 2016, called for the same consequences to be applied to the U.S.-based Episcopal Church. They asked that the Episcopal Church would, for a period of three years, “no longer represent us on ecumenical and interfaith bodies, should not be appointed or elected to an internal standing committee and … not take part in decision making on any issues pertaining to doctrine or polity” on Anglican Communion bodies. That action came in response to the 2015 General Convention decision to change canonical language that defines marriage as being between a man and a woman (Resolution A036) and authorize two new marriage rites with language allowing them to be used by same-sex or opposite-sex couples (Resolution A054).

In a similar move, the General Synod of the Scottish Episcopal Church last June voted in favor of allowing gay couples to marry in church. The vote means that the canon law will be changed to remove the definition that marriage is between a man and a woman, which enables gay and lesbian Christians to be married in church. The change in canon law also will stipulate that members of clergy will not be required to solemnize a marriage against their conscience.

Strange also recognized that the decision taken at the last Primates Meeting “to exclude our brothers and sisters in the Episcopal Church from debate on doctrine and from chairing Anglican Communion committees, is a decision that now also pertains to us. We will continue to play our part in the Anglican Communion we helped to establish, and I will do all I can to rebuild relationships, but that will be done from the position our church has now reached in accordance with its synodical processes and in the belief that love means love.”

He explained that the process in Scotland had included “much prayer, theological debate, open and, at times, very personal testimony and that opportunity had been provided for groups throughout the church to discuss this matter and to pray about it; this included the voice of the youth in the church, the sharing of powerful words and stories from elderly members and hearing representation from those who hold a traditional understanding of marriage, those who see marriage as including same-gender couples and those who have encountered exclusion in declaring their love.” 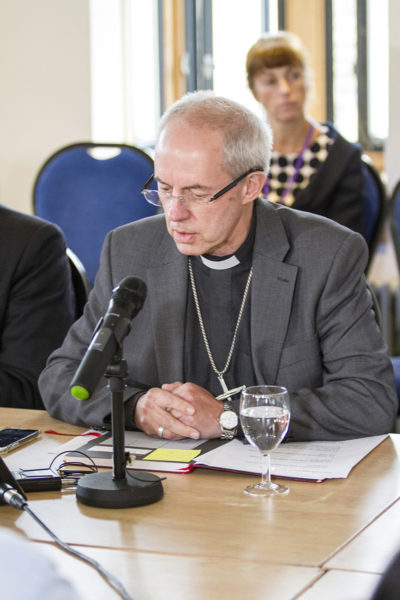 Archbishop of Canterbury Justin Welby addresses media Oct. 3 during a press conference at the conclusion of the second day of the Primates Meeting. Photo: ACNS

During an Oct. 3 press conference, Archbishop of Canterbury Justin Welby said that there “were a lot of expressions of disappointment” with Scotland’s decision, but that Strange had been “careful in expressing his recognition that this was going to lead to consequences in terms of not being able to play a role in ecumenical or leadership roles in the Anglican Communion … and that was in line with the decisions reached in January 2016.” Welby said that no formal vote was taken by the primates to ask the Scottish Episcopal Church to accept the consequences “as there was no need for one.”

At their January 2016 meeting, a majority of the primates requested action against the Episcopal Church, officially using the language of “consequences,” although some have argued that they are in fact “sanctions” with a different identity.

Three months later in April 2016, the Anglican Consultative Council, the Communion’s only official policymaking body, declined to endorse or take any action similar to the primates’ call for three years of so-called “consequences” for the Episcopal Church. The Episcopal Church’s three ACC members participated fully in the meeting.

In his briefing to reporters, Welby said that some primates had raised the question on whether the “consequences” for the U.S.-based Episcopal Church had been followed through.

“I went through what we have done and they were satisfied,” he said. “I think I can show very clearly that everything that was decided that could be carried out was carried out.”

He said that the primates raised two “confusions” over the decision:

“One was that the Episcopal Church … was at the Anglican Consultative Council Meeting in Lusaka last year. Of course the ACC is a trust under English law. They are members of that trust. In fact one of them at the time, although he has stepped down, was a trustee. I have no power to overrule English law and say they can’t come. And so that was explained. I don’t think that had been fully understood.

“The other was asking why the Presiding Bishop of the Episcopal Church was on the task group looking at walking together. When you look at the wording of what was decided last time it was perfectly clear that there needed to be a conversation, a dialogue, about what it meant. And you clearly can’t have a conversation when you only have one group in the room.

“Talking to people over dinner last night and since, there has been no disagreement with that.”

Three primates – Archbishop Nicholas Okoh of Nigeria, Archbishop Onesphore Rwaje of Rwanda, and Archbishop Stanley Ntagali of Uganda – are not attending the Primates Meeting because of the developments in the U.S.-based Episcopal Church and the Scottish Episcopal Church.

Another three – Archbishop Sturdie Downs of Central America, Archbishop Jacob Chimeledya of Tanzania, and Archbishop Stephen Than Myint Oo of Myanmar – are missing the meeting due to a mixture of practical, health and internal country affairs, according to the Anglican Communion Office.

The primates in January 2016 also asked the Archbishop of Canterbury to establish a task group “to maintain conversation among ourselves with the intention of restoration of relationship, the rebuilding of mutual trust, healing the legacy of hurt, recognizing the extent of our commonality and exploring our deep differences, ensuring they are held between us in the love and grace of Christ.”

The task group held its first meeting in September last year and reported back to the Primates during the first two days of the meeting in Canterbury. Curry is a member of the group.

Issues of human sexuality have dominated many of the Primates Meetings of the last 15 years. Although this gathering has begun by addressing recent provincial actions on marriage equality, the primates are now expected to turn their attention to other pressing global concerns that affect the 165 countries and 39 provinces the primates represent.

Curry has said that he hopes to talk about migration, immigration and refugees at the meeting, his second since becoming presiding bishop in 2015.

“Most of our countries are impacted by people who are fleeing wars and violence and injustices and in many of our countries extraordinary ministries are reaching out to help those who find themselves refugees,” Curry said in a recent video message. “In the Episcopal Church, that is true as well. Even now, young people who we call DREAMers, whose parents brought them here years ago … are frightened and fearful that they might have to leave this country. … Refugees are our brothers and sisters because one God created us. …We must help those who are our brothers and sisters and find themselves refugees.”

Curry’s message comes against a backdrop of a growing intolerance of refugees in the U.S. and at a time when U.S. President Donald Trump has announced he intends to reduce the refugee admissions ceiling for the coming year to 45,000 persons, almost half the previous historic low of 85,000. Meanwhile, on Sept. 24, the Trump administration issued its third travel ban in less than a year aimed at blocking all refugees and travelers from eight mostly Muslim-majority countries from entering the U.S.

As the Canterbury meeting got underway with the tragic news of the shooting in Las Vegas, the primates gathered around Curry in prayer and solidarity, issuing a statement that called the weekend massacre “truly shocking.” The primates also invited Curry to offer the opening prayers during Evensong at Canterbury Cathedral on Oct. 2.

In a video message published last week, Archbishop of Canterbury Justin Welby said: “We will miss those who are not there, miss them very much.”

Primates are the senior archbishops and presiding bishops elected or appointed to lead each of the 39 autonomous provinces of the Anglican Communion. They are invited to the Primates Meetings by the Archbishop of Canterbury to consult on theological, social and international issues.

The Anglican Communion Primates Meeting is one of the three instruments of communion, the other two being the Lambeth Conference of bishops and the Anglican Consultative Council, the communion’s main policymaking body. The Archbishop of Canterbury, as primus inter pares, or “first among equals,” is recognized as the focus of unity for the Anglican Communion.

In some Anglican provinces the primate is called archbishop or metropolitan, while in others the term presiding bishop – or as in Scotland, primus – is used.

— Matthew Davies is advertising and web manager for the Episcopal News Service.

Editor’s note: This story was updated Oct. 4 at 12:15 EDT to add further comments from Welby on the circumstances surrounding the implementation of the 2016 “consequences” for the Episcopal Church.