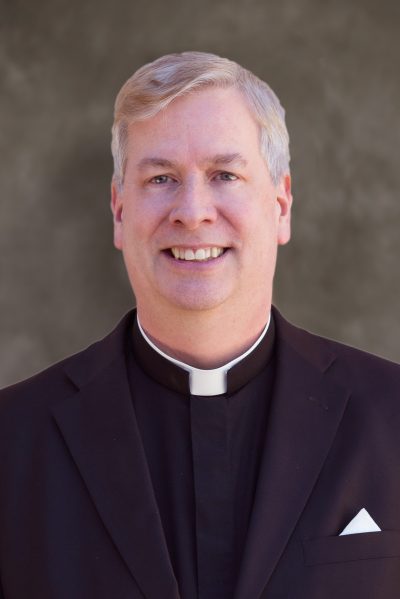 Bishop Michael L. Vono, D.D., announces the appointment of Fr. Robin Dodge as Canon for Ecumenical and Interfaith Dialogue for the Episcopal Diocese of the Rio Grande.

Fr. Dodge, who is the Rector of Church of the Holy Faith, Santa Fe, will be inducted as Canon during the opening Eucharist of the 65th Annual Convention of the Diocese of the Rio Grande on October 19 at All Saints Episcopal Church, El Paso. Also to be inducted at the Eucharist will be the Rev. Canon Patricia Soukup, who has been appointed Archdeacon of the Diocese.

The Rev. Robin D. Dodge was called to be Rector, following the untimely death of the Rev. Cn. Kenneth J.G. Semon. Bishop Vono celebrated the New Ministry of Fr. Dodge and Church of the Holy Faith following Diocesan Convention on Sunday, October 30, 2016, with a High Holy Mass.

Fr. Dodge grew up in Springfield, VT and received a B.A. from Cornell University in 1980, where he studied history with a particular focus England during the reign of the Tudors and Stuarts. He received a J.D. in 1983 from Boston University. As a lawyer, Fr. Robin practiced corporate law concentrating in trademarks, copyrights, and unfair competition, first in Chicago and then in Washington, D.C., with Winston & Strawn (formerly Bishop, Cook, Purcell & Reynolds) and then Venable, Baetjer, Howard & Civiletti.

After more than ten years as a lawyer, and wrestling with a perceived call to ordained ministry while a parishioner at Church of Our Saviour in Chicago and Christ Church Georgetown, Fr. Robin entered Virginia Theological Seminary and was awarded an M.Div. in 1999. He was ordained deacon in 1998 and priest in 1999. Fr Robin spent more than three years as Associate Rector of St. Mary’s Episcopal Church in Arlington, VA, before being appointed Associate Vicar of St. Mary Redcliffe in Bristol, England. Upon the Vicar’s departure in 2004, Fr. Robin served as priest-in-charge. In 2005 he was called to be Rector of St David’s Episcopal Church in Washington, D.C., where he served until he was called to Holy Faith.

Since 1986 Robin has been married to Thérèse Saint-André, whom he met at coffee hour at Church of Our Saviour in Chicago. They have two sons, Cameron, age 24, a graduate of St. Albans School in Washington and the University of Virginia, who lives and works in Atlanta, and Barrett, age 21, who is pursuing vocational training.