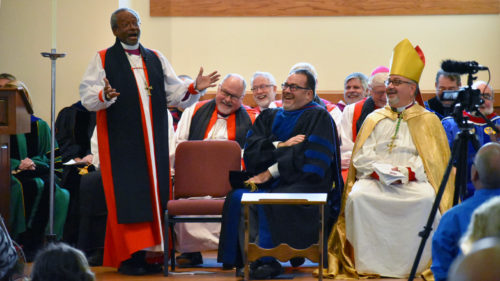 [Episcopal News Service – Nashotah, Wisconsin] “It is good to be here.”

A throwaway cliché in most speeches, but spoken Sept. 28 by Presiding Bishop Michael Curry as the fall sun was setting at Nashotah House Theological Seminary, there was reason enough for his audience of 150 or so people to believe he was being sincere.

For starters, Curry was in Nashotah to receive the seminary’s Ramsey Award, named after Arthur Michael Ramsey, the Archbishop of Canterbury from 1961 to 1974. Bishop Daniel Martins of the Diocese of Springfield in Illinois, who serves as Nashotah House’s board chairman, presented the award to Curry for “his eloquent, inspiring preaching to refocus church discourse in a Christo-centric manner.”

Curry’s trip to the tranquil rural countryside west of Milwaukee also served as a reprieve between big church events. He had just attended the six-day House of Bishops meeting in Fairbanks, Alaska, and was on his way to London to attend the Anglican Communion’s primates meeting.

The pleasure of being in Nashotah, Curry indicated, also stemmed from an appreciation of the seminary’s mission: training leaders for what Curry regularly describes as the Episcopal branch of the Jesus Movement.

“We are making ministers in this mission moment, to claim and provide leadership for a movement, a movement that began long ago … a movement whose purpose is to change this world from the nightmare our sinful, selfish selves make of it to the dream, the vision of the kingdom, the reign that God has intended,” he said.

After joining the crowd in applauding the matriculation of 21 seminary students and then receiving his award, Curry began his 30-minute convocation address by thanking the seminary for the honor and quoting the words of Ramsey that are reproduced on the plaques now given to every newly consecrated bishop in the Episcopal Church.

As he proceeded, he began developing the theme of movement, citing the “active verbs” and commands that Jesus uses in the gospels.

“Go and proclaim the good news.”

Jesus called on his disciples to “be my witnesses, in Judea, in Samaria and unto the utmost parts of the Earth, and in the first century Palestine and in 21st-century America,” he said.

Curry followed up that thread with a nod to seminary history.

“I’m at Nashotah House. … You got here because somebody named Jackson was part of a movement,” Curry said in summarizing the 175-year-old seminary’s origin story – the founding role of Bishop Jackson Kemper, the influence of what was known as the Oxford Movement and the desire to bring the church back to its roots in the Anglo-Catholic tradition.

“That’s what catalyzed and woke up this wonderful old church of ours,” Curry said. “You know, the power of movement to change institutions and change the world.”

Curry, always a ready storyteller, also took time to engage the students, faculty and family members with tales of childhood winters spent up in Buffalo, New York, of his grandmother’s deep Christian faith, of an inspiring visit to Howard University. He injected notes of humor that several times had the crowd erupting in hearty laughter.

While incorporating a favorite refrain of his sermons, that God is love, he returned throughout the speech Sept. 28 to the theme of movement and the calling of spreading Jesus’ message of love.

As Nashotah House gears up for Experiencing Nashotah on Nov. 9 and 10, a twice-annual event for prospective students, Curry praised the seminary for its work in educating not just future priests but also a new generation of deacons and laypeople who will carry out Jesus’ mission.

“We need this seminary to form leaders of a movement,” Curry said, “a movement that will bring folks Christ and send them out in his name to change the world.”